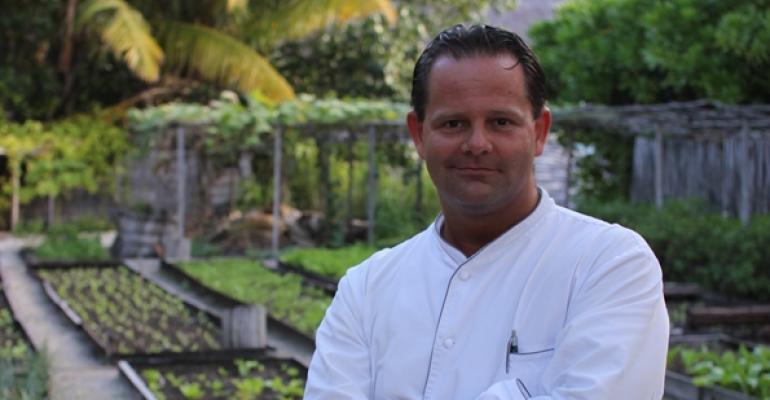 Antonio Pisaniello (right) has been named executive chef of PizzArte, a Neapolitan restaurant in New York City. Also the chef of Michelin-starred La Locanda di Bu in Nusco, Italy, about an hour outside of Naples, Pisaniello is adding classic dishes from that area of Italy to the menu, including cuttlefish stewed with peas and finished with raw olive oil, and fusilli with a ragù of veal and pork stewed with San Marzano tomatoes.

Jansen Chan has been named director of pastry education at the International Culinary Center in New York City. Most recently executive pastry chef of Oceana in New York, Chan studied architecture before choosing a career in foodservice.

Joseph Rose (left) has moved from The Pump Room in Chicago, where he was chef de cuisine, to take up the executive chef position at Lockwood at the Palmer House Hilton in Chicago. In his new job, Rose, who grew up in the Chicago area and studied cooking at Elgin Community College in Elgin, Ill., is preparing dishes such as hazelnut crusted foie gras with spiced bread; local pork with celery root purée, sweet potato, cabbage and cob-smoked bacon; and black bass with chorizo, clams, mussels and Yukon gold tomatoes in shellfish broth.

Michael O’Dowd (left) is the new executive chef of the Sheraton Phoenix Downtown Hotel in Phoenix, Ariz., with responsibility for the property’s District American Kitchen and Wine Bar, the Park Lounge lobby bar, and Breeze bar. Most recently executive chef of the Sheraton Wild Horse Pass Resort & Spa in Los Angeles, O’Dowd studied business management at the University of Florida in Gainesville, Fla., before entering foodservice, and since then has worked under Michelin-starred chefs Guenter Seeger, Boris Keller and Pierre Orsi.

Todd Sicolo (right), former executive chef of the Arizona Biltmore Resort & Spa in Phoenix, Ariz., is now executive chef of the Royal Palms hotel in that city and its T. Cook’s restaurant. A native of Brooklyn, N.Y., and a graduate of the Culinary Institute of America in Hyde Park, N.Y., Sicolo plans to refresh the signature restaurant’s Mediterranean-inspired menu with “more playful dishes and sexier presentations,” according to a hotel spokesperson.

Philliberto Jimenez, who in the aftermath of Hurricane Sandy lost his job as sous chef at Brooklyn, N.Y., landmark River Café, is now head chef at Blue Planet Grill in Manhattan, where he is preparing dishes ranging from crispy fish tacos to whole roasted branzino to fire roasted eggplant with tahini.

Ingo Moller (left) has been named executive chef of The Regent Palms Turks and Caicos in Providenciales. Originally from Berlin, Germany, Moller most recently was executive chef at Soneva Gili by Six Senses in the Maldives. He also spent several of his 18 years of experience in the hospitality industry working on luxury yachts.

Kazuki Tozawa has been promoted from sushi chef to executive sushi chef of Marssa at The Westin Lake Las Vegas Resort & Spa in Henderson, Nev., putting him in charge of all operations at the Asian fusion restaurant. A native of Aomori, Japan, Tozawa moved to the United States in 1991 and studied small business management before embarking on a sushi career that started in 1996 with a four-year apprenticeship under Izumi Miyazawa in Fairfield, Calif. Tozawa is excited to make use of kanburi, or winter king yellowtail, for which the season has just started.

Correction: January 7, 2013 A previous version of this story misstated the name of the hotel where Kazuki Tozawa works.