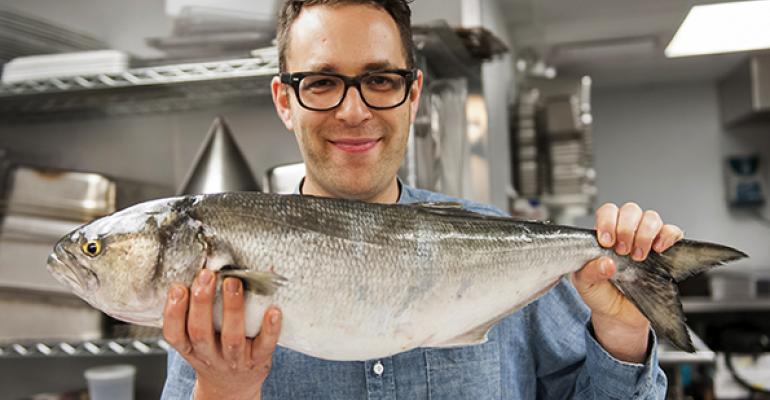 Chefs across the country have noticed that their customers have become increasingly adventurous.

Americans are showing a growing interest in trying new things, whether it’s spicier food, a wider array of vegetables or proteins they haven’t eaten before.

Trend watchers point to the rise of food television as a cause of Americans’ growing interest in what they eat, or proof of that interest, or a combination thereof.

“Knife Fight,” conceived of and hosted by chef, restaurateur, and food TV veteran Ilan Hall, leans on the side of culinary adventure. The program pits some of the country’s leading independent chefs in 60-minute, head-to-head competitions, often using unfamiliar ingredients.

The concept was derived from a sort of impromptu culinary fight club that Hall participated in in Los Angeles.

“We were already doing cooking competitions in LA just for fun,” Hall told Nation’s Restaurant News last year, with “local chefs hanging out, having drinks, saying ‘I bet you can’t cook something awesome with that.’”

Now wrapping up its third season, which airs Tuesday, Hall said he has a system for picking the ingredients his contestants compete with.

“I’ll come up with a dream list of things that I want to use,” he told NRN last week. “We keep it in a Google document, and we keep adding and subtracting, and then we apply it based on when we shoot the show, based on seasonality and everything.

“What I don’t want to do is [pick ingredients] that are going to guarantee to be horrible, because that’s ridiculous,” he said. “At the end of the day, I’m eating it. I want it to be delicious.”

“Every chef has put out delicious food, some more than others, but it’s quite startling to see how great it comes out,” he said of this season, shot at his Brooklyn, N.Y., restaurant The Gorbals.

The ingredients Hall picked reflect a variety of food trends.

When it came to seafood, the season focused on species from the Northeast, including live Maine lobster, steamer clams, bluefish, porgies and whole swordfish.

Whether those ingredients will break into the mainstream is unclear, but Hall also gave chefs non-traditional cuts of mainstream proteins, such as beef shank. He said the shank actually challenged chefs more than some of the more “wild ingredients.”

“It’s tough because [beef shank] is literally tough, and it’s one of those things that you have to have an understanding of a pressure cooker to break it down in time,” he said.

Bone marrow has become a staple at many high-end independent restaurants, which are also offering more chicken liver, often in the form of pâté. But Alex Harrell, chef-owner of Angeline in New Orleans, has seen customers go crazy for the crispy fried chicken livers that are the centerpiece of a salad with arugula, pickled blueberries and shaved red onion in buttermilk dressing.

Celery root, salsify, beets and fennel were all given to chefs on “Knife Fight” during the third season.

Salsify moves in and out of fashion at independent restaurants, such as Pax Americana in Houston, where last winter it was part of a braise of Berkshire pork collar that also included cauliflower, radish, fermented carrot and black garlic. So does celery root, which was recently on the menu at Junto in Philadelphia, where it was fermented and served with grilled sturgeon and romanesco.

Fennel is served at restaurant chains such as Gordon Biersch Brewery Restaurant, where it is part of a San Francisco-style seafood stew called cioppino, and at Max’s Wine Dive, where it’s in a butter lettuce salad with pan-roasted asparagus, bacon lardons and a green garlic Parmesan dressing.

Beets are particularly popular at salad-focused chains such as Sweetgreen, which serves it in its Roasted Salmon + Radish entrée, along with arugula, kale and carrots in a mustard-orange vinaigrette. The Roasted Beets & Feta Power Lunch at Pret A Manger also has julienne apple, walnuts, kale and red wine vinegar.

Chefs had to cook with both tobacco and hay in “Knife Fight.” Both are generally used to wrap food to add, respectively, subtle spicy/earthy and woodsy/grassy, flavors.

“There are a lot of old French recipes where they’ll do things like brine a ham and then wrap it in hay and cheesecloth and poach it for a very long time at a very low temperature,” Hall said. “And now you see it in more modern approaches, like using hay ash to add different flavor profiles. If you want something that’s kind of burnt and smoky, you can burn hay slowly over a grill and then pulverize it and season it with something. It will also give off a lot of beautiful black color.

Maysville in New York City wraps oysters in hay, roasts them and serves them with salsify and pickled shallots.