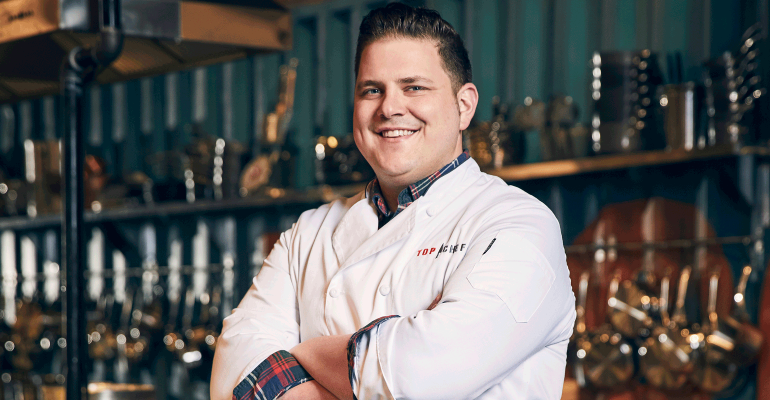 The winner of the latest season of Top Chef was already a well-established chef in his own right before he rocketed to celebrity chefdom. For nearly three years, Joe Flamm has been executive chef of Spiaggia in Chicago, one of the most critically acclaimed restaurants in the country, with a Michelin star and two James Beard Foundation Awards. It was inducted into Nation’s Restaurant News’ Fine Dining Hall of Fame in 1992.

Before joining Spiaggia, Flamm, a native of the south side of Chicago, worked with Bill Kim at Urbanbelly BellyQ and previously was on the opening team of Stephanie Izard’s Girl and the Goat, all in his hometown.

In two interviews — one last summer and one shortly after his Top Chef victory — Flamm discussed his experience on the hit Bravo TV cooking competition show as well as his approach to making Italian food.

How much time does it take to be Top Chef contestant?

Who ran Spiaggia when you were away?

It’s incredibly grueling. But it’s like one of those things that’s so grueling it’s fun, because you’re working so hard, you’re going so crazy, but you have these people that you’re going through this process with, and that’s what makes it really fun.

It’s like gambling: When you’re winning it’s fun; when you’re losing, it’s not fun at all. The hugest difference is working in a restaurant you get to go home at the end of the night, and you know you get to come back the next day. It’s similar to that grind of a restaurant, but it’s the mental strain of it that’s so different from a restaurant.

You have an Italian background, with two grandparents from the region of Molise, but your cooking background is more eclectic. How did you end up coming back to Italian food?

I worked for Stephanie Izard, who cooks crazy Stephanie Izard food, and it doesn’t really have any genre or whatever you want to call it. … She got me interested in Asian flavors. So then I worked under Bill Kim for two years, and my executive sous chef said I should round out my resume with Italian food and recommended I go to Spiaggia. He didn’t give me a second option. Six months later Spiaggia was looking for a sous chef and I got the job.

What’s your approach to making Italian food in the Midwest?

A lot of the cooking we do at the restaurant is really about the ingredients, from doing a ton of research for the flour we’re going to use in the pasta, to the tomatoes we’re going to get, and any protein we’re using is super, super important.

[For last summer’s menu] we did a Caprese pasta all made by hand — the dough never touches a machine. We used double-O flour, eggs, juiced tomatoes that we reduced down and tomato powder. We rolled it out with an old-school four-foot maple rolling bin, stuffed it with burrata and made it into tortellini. We served it with a green tomato brodo [broth] and a little pesto. You change the menu seasonally, right?

We design the menu to change regionally by season. So in the winter we feature cooler northern regions and then we move farther south.

The place we decided to focus on this winter is Venice. One of the most popular dishes is casonsei, a traditional Venetian-style stuffed pasta. We do a beet-and-ricotta filling for it. Then we take the whey leftover from making the ricotta and use it for the sauce. We cook the whey down with a little beet powder, so it’s bright red. When we make the dough, we make a regular semolina dough and then another one that’s made with toasted poppy seed purée and beet ash, so it’s a black dough, and we roll stripes of that dough into the regular do, so all the casonsei are striped. Traditionally in Venice they just sprinkle the casonsei with poppy seeds.

How about for this spring?

It’s not hot enough for us to go to Campagna or Basilicata or someplace like that, but it’s a perfect time to do Rome. We’re trying to get more off-the-beaten-path from Cacio e Pepe and Carbonara.

Another classic Roman pasta that we don’t see much is Aglio e Olio.

And pepperoncini. My first day staging in Rome they made that for staff meal, and it was the first time I’d really seen how they do it, and it was so good and satisfying.

Here they might sweat some garlic, throw pasta in the pan and toss it up with some olive oil and there you go. In Rome they take olive oil and slowly heat it up with a lot of garlic and some pepperoncini — little chiles — so the olive oil gets super, super flavored. You just let it go for a couple of hours. Then they strain everything out, and when they cook the pasta they damn near poach it in the olive oil after it comes out of the water. It’s so much olive oil, and so unctuous and delicious. It’s amazing.

How are you translating that at Spiaggia?

We’re making agnolotti with fermented ramps from last year in the dough and doing a little Parmigiano fonduta filling, and then we’re finishing it tableside with a spicy olive oil that we made. We pour it warm to finish it.