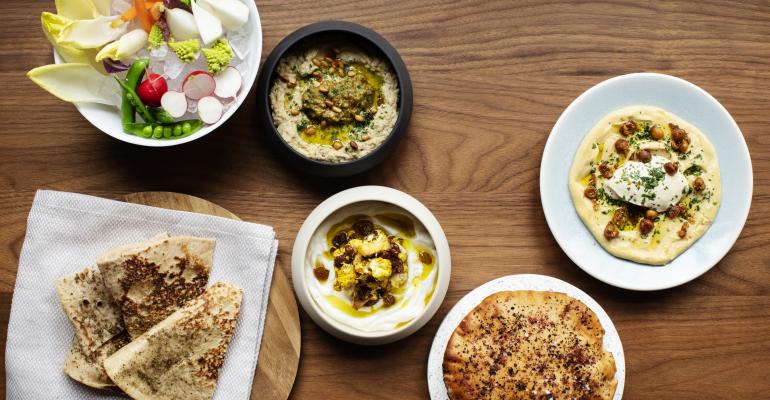 Mara in Minneapolis turns out close to 250 pitas every day

Mara, a Mediterranean restaurant at the Four Seasons Hotel Minneapolis, opened to wide acclaim in June, receiving 3.5 stars from the Star Tribune and a rave review from Minnesota Monthly, which also named it “Restaurant of the Year.”

One highlight is the restaurant’s pita.

“The pita bread is lights-out,” chef and owner Gavin Kaysen said, who credits chef de cuisine Thony Yang for developing it. “He worked really hard at making that a great pita bread, and we’re really proud of what he has done.”

The restaurant turns out close to 250 pitas each day, and the process of making it takes two days, two different ovens, and a special local grain.

“Grains are a very important part of our culture here,” Kaysen said of Minneapolis. The city started out as a mill town thanks to the Mississippi River’s Saint Anthony Falls, which runs through the city and provided power for early sawmills and grain mills.

That includes the Redeemer wheat that Yang uses for the pita.

It’s a hard red winter wheat from Madison, Minn., that Baker’s Field Flour & Bread, another Minneapolis company, uses as its all-purpose flour, but its protein level is 11.2%, a bit higher than some other all-purpose flours but lower than bread flour, which is why Yang likes it for pita. Flour with less protein would result in bread that’s too doughy and soft, but more protein would result in a crusty bread that pita’s not supposed to be.

The recipe was derived from the pita in Israeli Soul: Easy, Essential, Delicious, a cookbook by Philadelphia-based chef Michael Solomonov, who last November participated in Kaysen’s guest-chef series at another of his restaurant’s, Spoon and Stable.

Kaysen also operates Socca, a café at the Four Seasons, fine-dining tasting-menu restaurant Demi in Minneapolis’s North Loop, and Bellecour Bakery, which is about to open its third location.

“Pita was one of the things that Michael Solomonov did, and obviously he did it very well,” Yang said.

But that was just the starting point, because Yang had to find a way to crank out a lot of the bread during busy dinner service.

There are other differences, too. The Redeemer wheat is one of them. The fact that the wheat is milled by Baker’s Field the day before it’s delivered is another. Yang also spreads out the work over two days.

He starts in the typical way of combining warm water with yeast, and incorporating the flour, a little salt, sugar, and some olive oil. Then he lets it proof overnight in the walk-in cooler.

“That way we can really control it for service,” Yang said, because the work is spread out over two days.

The next day they portion it and let it proof at room temperature. Then they roll it and par-bake it in the restaurant’s deck oven for about a minute, which gives the bread its shape and makes it ready to finish in the restaurant’s red oak wood-fired pizza oven.

Yang said par-baking it was the idea of the hotel’s executive pastry chef, Eddy Dhenin.

Once the pita is baked, it’s brushed with olive oil and sprinkled with flakey sea salt, sumac, and urfa biber pepper.

Yang has been with Kaysen’s restaurants since 2016, when he started at Spoon & Stable. He went on to work for Bellecour, whose pastry chef, Diane Moua, is a member of the Hmong ethnic group from Laos, as is Yang — which, according to his biography is one of the reasons he was intrigued by the restaurant group. He went on to become the sous chef of Demi before joining Mara.

Yang uses other grain from Baker’s Field, too. High-protein Bolles Wheat, which is about 15% protein and is grown in Le Sueur County southwest of Minneapolis, is used to make freekeh porridge bread, for which freekeh, a smoked green wheat, is folded into the dough.

“It almost tastes like there’s bacon in it,” Yang said.

Heritage Red Fife, which is grown near Fargo, N.D., and is closer to 13% protein, is used to make pan de cristal, a Spanish bread that’s light and fluffy with a thin, crunchy crust. The Red Fife also is used for Mara’s Turkish flatbreads, which Yang says are a little more hefty and less fluffy than the pita.

Yang said developing the pita was a great learning experience.

“I learned a lot about flour itself. It’s really cool to go through the process,” he said. “You think flour is just flour — all-purpose flour, bread flour, pastry flour — but when you really dive deep into it there’s more that goes into it and you appreciate all those little nuances.”

The fact that the grain is milled to order also makes a big difference, he said.

“Baker’s Field brings in the grain whole, and they’ll mill it the day before they send it to us. … So it’s not like they’re milling everything and it’s chilling there for months. It’s the best thing ever.”