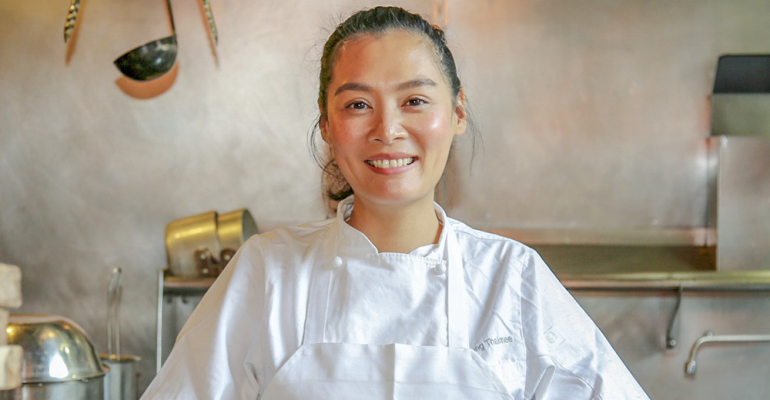 I sat down with Hong Thaimee just days after she’d flown back from Paris. She had been one of around 100 judges in the inaugural World Restaurant Awards, a cousin of the World’s 50 Best Restaurant Awards, but going to a more eclectic collection of difference-making restaurants selected by a more elite panel than the more than 1,000 voters in the 50 Best. She was a little star struck.

“I was seeing Alain Ducasse right in front of me, and Dan Barber right there, Alex Atala from Brazil, Alain Passard on my left-hand side … very notable people in the culinary industry from all around the world, and I’m part of it,” she said. “Ten years ago, I had that dream of becoming one of this group, and it’s real.”

Now she’s the chef and owner of Thaimee Table in New York City and its fast-casual sister Thaimee Magic, author of the 2015 cookbook “True Thai: Real Flavors for Every Table,” a TV personality and unofficial ambassador of Thai food.

“I’m pure Thai,” she said, “but I got to understand American culture, so I could be a bridge between the two cultures and transform the flavors in a way that’s approachable and understandable.”

An example of that at Thaimee Table is the “Thai Burger.” It’s actually a northern Thai pork sausage called sai-ua (pronounced sort of like “sigh oo-wa”), shaped into a patty and served on a bun with cilantro-lime mayonnaise and a slaw of green papaya marinated with fish sauce, palm sugar and tamarind.

“It’s a lightly pickled som tam,” she said of the slaw, referring to the spicy green papaya salad popular in northern and northeastern Thailand.

“Last night I had a group of five people from Boston and they ordered the Thai Burger and they were like, ‘Oh my god, this is so good,’” she said with a strikingly accurate American accent. “But when Thai people order it, they say, ‘You know, this is not fusion. This is just a modernized style.’”

The flavor is the same as it would be at home, where it would be served as sliced links and eaten with ginger, raw cilantro and other herbs and raw vegetables, and maybe a type of northern Thai chile relish — either nam prik noom or nam prik ong, depending on the whim of whoever’s serving it.

A native of Chiang Mai in northern Thailand, Thaimee’s curiosity about the rest of the world was piqued in eighth grade, when a young Thai woman who grew up in Mount Vernon, N.Y., visited.

“She had long hair — we weren’t allowed to wear long hair in school [a haircut just above the shoulders was basically part of the required uniform] — and she spoke with a different accent,” Thaimee said. “And she said, ‘You know, if you like, you should come to New York,’ and I was like, ‘Wow, there’s a world out there! She talks about things I haven’t heard or seen.’”

Her father told her that if she wanted to study in America, she had to learn English first.

“I listened to New Kids on the Block and all the American movies and I taught myself those skills,” she said.

She went to Portland, Ore., at the age of 17, and then returned to Chiang Mai to go to college, earning a bachelor’s degree in German and an MBA in international business management, and landed a job with a German pharmaceutical company, running their local corporate social responsibility program. But she sensed that office life wasn’t for her.

“I’m the type who has a lot of energy, and I have to be active all the time,” she said, echoing most chefs I’ve ever spoken to, “and I remember sitting in my office, and at 3 p.m. I’d be shaking. I was like, ‘I cannot breathe, I have to go somewhere.’”

When she was in her late 20s, the 2004 earthquake and tsunami that devastated coastal areas of the Indian Ocean, including southern Thailand, struck, and it occurred to her that maybe she should be doing something other than working in an office.

“I always loved cooking, and every time I cooked people liked it. I speak a couple of languages and could travel the world. I have business management experience, and when I was younger I was a model and am very comfortable in front of a camera.”

Although there weren’t a lot of American celebrity chefs on Thai television at the time, she enjoyed watching British food personalities like Jamie Oliver and Nigella Lawson.

“I decided I would like to create a company that would love and serve people good food,” she said.

She quit her job, packed her bags and moved to New York City.

Arriving in 2006, she started teaching cooking classes, but was advised that if she really wanted a career as a cook, she should work in restaurant kitchens. 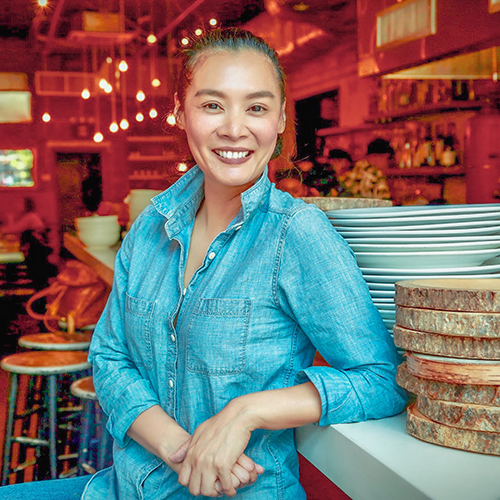 She looked on Craig’s List and saw that Spice Market, the beautiful, trendy restaurant in Manhattan’s Meatpacking District run by Jean-Georges Vongerichten, was hiring a hostess.

Vongerichten was one of the hottest chefs in New York at the time, and he’d famously spent several years working in Thailand’s capital, Bangkok.

Thaimee didn’t particularly want to be a hostess, but she figured it was a foot in the door.

Spice Market’s hiring manager looked at her résumé and saw right through her. Also, with no experience she wasn’t qualified to be a hostess, but Thaimee said he appreciated her drive and arranged a trial with Vongerichten.

“I studied all night on Google how to brunoise, kitchen terminology, and I went to buy a beautiful knife set so I could look professional, and somehow I got hired,” she said.

She worked there for a year, and impressed one of the managers enough that he said she had what it took to open a restaurant. Thaimee said he originally planned to open one with her, but that idea fell through. But the seed had been planted in her own brain, and she opened her own restaurant, Ngam, in 2011.

“Prom means ‘everything,’” Thaimee said. “My dad wanted me to be beautiful inside and out. That’s what he said.”

“Hong” means “swan,” and it’s her nickname, but most Thais go by nicknames instead of their given ones, and Thaimee is no exception.

Anyway, Ngam was a critical and business success, but Thaimee soon realized that the name was problematic, since people didn’t know how to pronounce it.

“Is it ‘negam? Nam?’ I don’t mind people pronouncing my name incorrectly, but let’s help them out,” Thaimee said she decided. So it became Thaimee Table.

For the record, “ngam” is pronounced how it’s spelled, starting with the ‘ng’ sound at the end of many English words, like “king” (and Hong, for what it’s worth, is pronounced with a long ‘o’, like the one in “bone”).

And while we’re at it, Thaimee would like the world to know that the popular Thai dish of spiced minced meat, laab, is pronounced like “lob,” and she doesn’t know why people spell it with an ‘r.’

“It’s not ‘larb,’” she said, pronouncing that ‘r’ like she was raised in Nebraska (the Thai ‘r’ is trilled, like it is in Spanish). “Seriously, I find it very disheartening when a lot of publications and a lot of chefs pronounce it ‘larb’. There’s no ‘r’. It’s loh-ling, sala-aah, boh-baimai,” she said, spelling it out in Thai letters.

And it’s made differently in northern Thailand than in the northeast or in Bangkok, where it’s spiced with bird chile and mixed with toasted rice for textural contrast. Thaimee’s planning on introducing a Chiang Mai version to her menu, spiced with a complex mix including cardamom, nutmeg, black pepper, cloves and dried chile powder.

“I feel like I want to bring in hang lay [a sour-spicy pork curry] and all kinds of Chiang Mai food that I love so much,” she said.

She’s already done that with Grabong, root vegetables dipped in a batter with red curry and coconut milk, fried and served with a peanut relish. She calls them Chiang Mai Fries on her menu.

Also on the menu is a northern dish called Yam Jin Gai. Yam means “mixed together,” and although it’s often translated as “salad” and is usually served at room temperature, it’s not a separate course and is served as part of the main meal in Thailand, which is eaten family-style.

Jin Gai is northern dialect for “chicken meat,” and the dish, served hot, is made be cooking shredded chicken in broth with turmeric, mint, lemon grass, chile, garlic and shallots.

Though butterfly pea flour, with its brilliant blue color that turns purple when acid is added to it, is the darling of trend-forward mixologists at the moment, it has long been commonplace in northern Thailand.

“It’s everywhere in Chiang Mai,” Thaimee said. “I played with it in my yard every summer.”

It’s even common to color glass noodles with it, Thaimee said. Her stroke of genius was to add it dressing — fish sauce, palm sugar and lime juice — tableside so it changes color in front of people.

“Everyone of every age and every nationality says, ‘Oh my god, look at this!’” she said. “So I called it magic.

“As a chef we have the responsibility to feed people first with the eyes, then the smell, then the stomach, and hopefully when people leave the restaurant, it’s all of the senses that you feel, and the heart.”