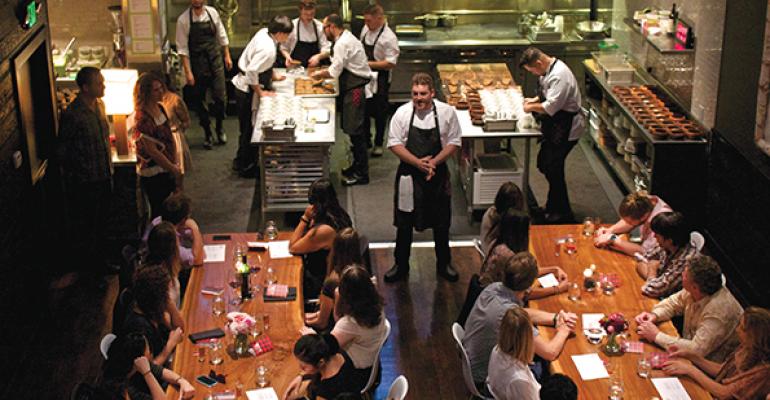 Food & Wine magazine unveiled Monday its annual list of Best New Chefs for 2016, a collection of up-and-coming talent that is reshaping the nation’s dining scene.

A nod from Food & Wine editors and other contributors can be a career-defining moment for those selected. Alums of the list over the past three decades include acclaimed chef/restaurateurs such as Nancy Silverton, Thomas Keller, Tom Colicchio, Nobu Matsuhisa and David Chang.

Nilou Motamed, Food & Wine editor, said in a statement, “At Food & Wine, we’re obsessed with finding new talent, and the Best New Chefs platform showcases that perfectly. We’re honored to give these incredible cooks the recognition they deserve, an award that has catapulted so many careers and will change these chefs’ lives forever.”

This year’s list included only one woman, and the 11 honorees came mostly from major cities, including San Francisco, Chicago, Washington, D.C., and New York.

Winners will be featured in the July issue of Food & Wine, and will also be showcased at the magazine’s annual Food & Wine Classic event held in Aspen, Colo., from June 17-19.

David Barzelay of Lazy Bear in San Francisco. This lawyer-turned-self-taught chef got his start with an underground restaurant. Now customers buy tickets for Lazy Bear at $145 to $175 a pop for a tasting menu, with tickets available a month at a time. Each night is like a “modern American dinner party,” the restaurant’s website says. Nation’s Restaurant News has also named Barzelay MenuMasters Innovator of the Year.

Ravi Kapur of Liholiho Yacht Club in San Francisco. Kapur is Hawaiian born, and the restaurant is a tribute to the beach parties his uncle would cater in Maui. On the menu: Tuna poke with sesame oil, radish and nori cracker; asparagus with bone marrow béarnaise and brioche; and a slab of beef ribs with kimchi chili sauce, cauliflower and pickled red onion. Liholiho Yacht Club is also nominated for a 2016 James Beard Award for best new restaurant.

Edouardo Jordan of Salare in Seattle. He got his start as a server at Bennigan’s, but later moved on to the likes of The French Laundry in Yountville, Calif., and Per Se in New York. Now Jordan has come into his own at Salare with dishes like pork trotters and collard greens; ravioli made with sweetbreads, fiddlehead ferns, sunchokes and lamb sauce; and duck with dirty rice, trumpet royale mushrooms and peperonata.

Michael Gulotta of MoPho in New Orleans. This restaurant is known for its Delta-inspired Vietnamese food, with dishes like red pepper jelly clams braised with white wine, mint, pepper jelly and coconut milk and served with beignets. On weekends, Gulotta roasts a whole pig on the restaurant patio.

Brad Kilgore of Alter in Miami. Kilgore is described as playful, with a menu that includes dishes like a barely poached egg with Italian truffle pearls that mimic caviar with scallop-and-gruyère foam.

Kevin Fink of Emmer & Rye in Austin, Texas. Grains are Fink’s passion, and he mills up to 15 types in his kitchen, including emmer and rye, for which the restaurant is named. Examples on the menu include Blue Beard Durum spaghetti cacio e pepe with Challerhocker Cheese and dandelion greens; or a Hefeweizen ice cream sandwich with chestnut-and-emmer chocolate cookie.

Aaron Silverman of Rose’s Luxury in Washington, D.C. Rose’s is described as a bi-level, farmhouse-hip space with a dinner party vibe. The menu might include a crispy pig ear salad with mango and cabbage, or Peruvian-style chicken with fried yuca, sweet potato ceviche and plantains. In February, Silverman opened a new concept called Pineapple and Pearls, which has a coffee shop in front, and he plans to add high-end “super-fine dining” in the back. Silverman is nominated for a James Beard Award for best chef in the Mid-Atlantic.

Jeremiah Stone and Fabian Von Hauske of Contra and Wildair in New York. These chefs are credited with redefining the notion of a wine bar at Wildair with deceptively simple dishes like potato tart with uni and jalapeno. Wildair is also nominated for a James Beard Award for best new restaurant. At their flagship Contra, they feature five-course tasting menus, often bringing in top chefs for collaboration dinners.

Kris Yenbamroong of Night + Market Song in Los Angeles. Featuring a menu inspired by street food from Northern Thailand, the magazine describes the restaurant as having “one of the coolest, most vibrant cuisines in Los Angeles.” Yenbamroong humbly calls it “booze food.”