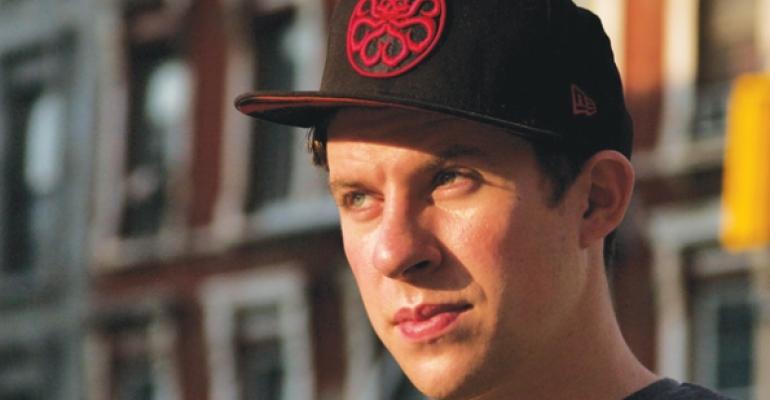 Justin Warner is an idiosyncratic character whose creativity with food is rivaled only by his devotion to basic service fundamentals learned over years of working in notable front-of-house roles. He’s best known now as this year’s winner of “Food Network Star,” a reality TV show on which he competed to earn hosting duties for a show of his own. The new series will premiere on the Food Network at an as-yet-unannounced date.

Before that he worked as a captain at The Modern, a revered New York restaurant run by Danny Meyer’s Union Square Hospitality Group and situated in the city’s storied Museum of Modern Art. After that he went into business for himself with Do or Dine, a playful and eccentric restaurant in the Bedford-Stuyvesant neighborhood of Brooklyn, where he stares down notions of high and low culture.

Off-kilter entrées include such specialties as frog legs with Dr Pepper glaze, and puns predominate. With his partners — chief among them former Modern co-worker George McNeese, with whom he creates the menu and shares kitchen duties — Warner has created a singular vision for food that is as wild as it is refined.

My dad was born in 1927, my mom was born in 1951, and I was born in 1984, so we had three generations of different kinds of food enthusiasm. As a kid I went through phases, and my parents enabled them. One month I ate all smoothies. For a while I made cheese sandwiches all the time. Lebanon smoked bologna was another phase; it’s Amish.

What was your first brush with fine dining?

In the eighth grade I went to the National Spelling Bee [near Washington, D.C.], all expenses paid. So I made my dad bring me to Michel Richard’s Citronelle. I had read about it in the Washington Post. I was intrigued because it had a “mood wall” that changed color depending on the vibe of the place. I had squab there for the first time. From there I started bussing tables and never stopped working in restaurants since.

What word knocked you out of the spelling bee?

Tarpaulin. I put an “e” at the end, like trampoline. I’m still bitter about it. [Laughs.]

How have your front-of-the-house jobs affected how you look at food?

You have a different perspective. I’m really big on how you actually get food to your mouth. There are a lot of dishes that [are] just not friendly to eat — not because there are bones or something, but just because they’re not really thought out.

Nachos. Everybody eats them, and then the final chips are dry; there’s no topping on them. ... The last chips are garbage. So my partner George [McNeese] and I invented Nippon Nachos. We use dumplings that have a filling, so even if there’s no nacho-y stuff on top, there’s some inside. Paying attention to those kinds of inconveniences is a real front-of-house thing.

What appeals to you most about working in the front of the house?

The best thing about having a front-of-house background is that my main goal is to make sure that guests are happy, not to make tickets disappear. A lot of people who are working the line in the kitchen, their goal is just to clear — it’s like Tetris to them. But for me it’s ultimately about guest satisfaction. I always say, “Chefs should be grandmas,” which I stole from Roy Choi in [Los Angeles]. Grandma cooks while everybody else eats. You ask her to sit down, and she says no; she’s busy pouring wine and cooking more and being the host. You don’t tell your grandma you’re on a diet; you just eat the damn mashed potatoes. If your grandma knows you’re a vegetarian, she accommodates — she doesn’t say, “Sorry, no substitutions or exceptions.” When you take the grandma approach and people feel it, they feel a little bit better.

What did you learn at The Modern that has stayed with you most?

Danny Meyer has a phenomenal record for service and also just making people feel good. I learned a lot about hospitality there. ... At the same time, the audience and customer base there is a little fancier and more persnickety than we get here in Bed-Stuy. So I learned a lot about humility and how to make even the people who to be unhappy makes them happy, happy. When it makes people happy to be unhappy, you have to rob them of their unhappiness. You have to bludgeon them [and] steal their purse of unhappiness. If that means that no check is presented or extra stuff is delivered, it’s like Malcolm X: “By any means necessary.” You just have to get in their brains for a night.

What was the seed of your idea to open Do or Dine?

All of us [worked in Midtown Manhattan and] lived on the same block — with the exception of one partner. And there were three more people in the area who all worked in Midtown. So we thought, unless this is some weird statistical anomaly, there has to be some sort of desire for a ... food-enthusiast restaurant and place to drink that’s not in Midtown Manhattan. So we took a gamble. We came up with a concept called “fine diving,” with caviar nachos and foie gras doughnuts, stuff like that — a mix of highbrow and lowbrow.

How do you and your partner divvy up duties in the kitchen?

I think George is a better cook, and I’m a little bit better at conceptualizing stuff. Where our Venn diagram overlaps is we’re both huge fans of food puns. We want to do something with Rocky Mountain oysters, which was his idea. I’d make wasabi marshmallow gratinées — kind of like a s’more — around a Rocky Mountain oyster. We would call it Fluffernutter. That’s how it works here. It’s kind of like Zen — chaotic, drunk Zen.

What did you learn from your time on “Food Network Star”?

You’re wearing a microphone the entire time, so there’s always someone somewhere listening to what you say. One day I said, under my breath, “Oh my God, I’m not going to make it,” and I saw all the cameras turn around to look at me and see my panic. I realized you have to live life like you’re wearing a wire because the second you sweat or show you’re not sure of yourself, people are going to look and want to watch the suffering. ... There’s a certain matter of illusion where you have to pretend everything is easy. If you don’t act like your shoes are too big, then nobody will know your shoes are too big.

As you gear up for your own TV series, are you concerned it might take away from the restaurant?

There’s a tiny glimmer or speck of worry, but not too much. This is a restaurant that is not so much defined by food as it is by spirit. It’s all part of evolution. If I have a career in TV and am not here as often as I should be, we’ll be held accountable by more people, actually. And that’s a good thing.