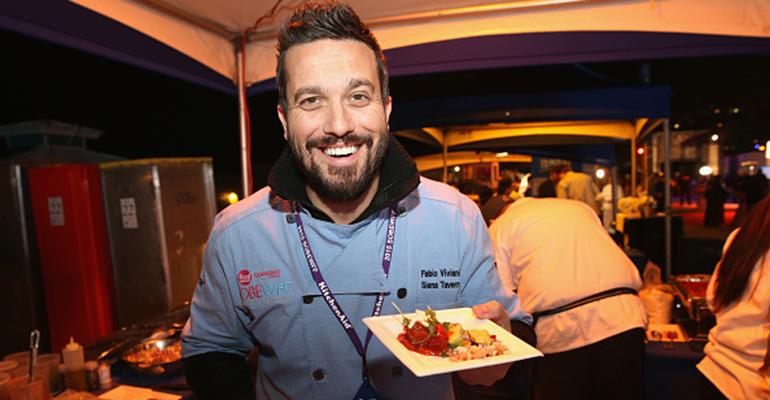 Fabio Viviani, a pioneer in fast-casual Italian dining, has been named MenuMasters Innovator of the year. He will be honored at this year’s Nation’s Restaurant News MenuMasters gala, sponsored by Ventura Foods.

Best known for his television appearances on Bravo TV’s Top Chef, where he was a fan favorite, Viviani is also an accomplished restaurateur.

A native of Florence, Italy, he owned and operated several restaurants there by the time he was 17. He moved to California in 2005 and opened his first restaurant in the United States, Café Firenze in Moorpark, Calif.

Viviani went on to open Siena Tavern in Chicago in 2013, and he entered the limited-service world in 2014 with Mercato by Fabio Viviani, which serves customizable pasta and pizza in Chicago and San Diego. In 2015 he opened Bar Siena and Prime & Provisions in Chicago, and in 2016 he opened Osteria by Fabio Viviani at the Delta terminal at LAX in Los Angeles. That same year he opened more Mercato locations in Tempe and Phoenix in Ariz., as well as in Cleveland and Benton Harbor, Mich. In 2017 he entered the Detroit market with Press Room, and also opened Portico at the del Lago resort in New York’s Finger Lakes region.

“Innovation comes in a variety of forms, and Fabio Viviani has shown innovation in what it means to be a modern chef,” said Nation’s Restaurant News senior food & beverage editor Bret Thorn.

“He has created a format for great, quick and affordable pasta and pizza at Mercato, while also providing great experiences in more traditional settings at restaurants such as Café Firenze and Siena Tavern, all while maintaining and promoting his own personal brand.”

He also has a seafood delivery service based in Maine called Lobster by Fabio and a winery in California’s Sonoma Valley that produces the Fabio Viviani Wine Collection. He also has his own lines of cookware and gadgets.

Among previous winners of the Innovator of the Year award are independent chefs Stephanie Izard, David Barzelay, Jimmy Bannos Jr. and Jonathon Sawyer as well as corporate chefs including Kurt Hankins and Stan Frankenthaler, who were at Applebee’s and Dunkin’ Donuts, respectively, at the time.