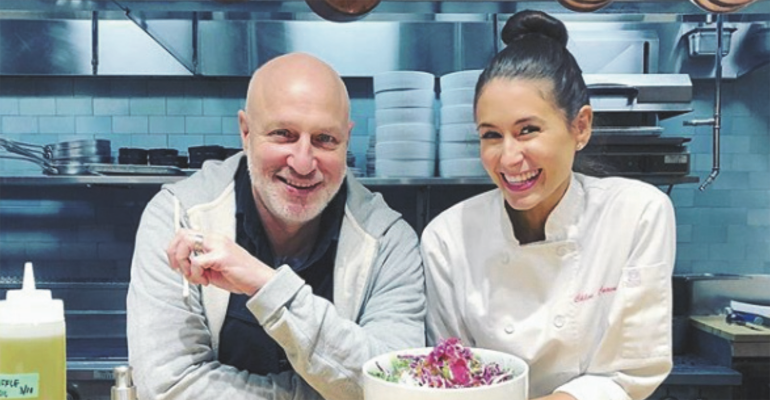 Claims extend back to earlier By Chloe lawsuit

Vegan entrepreneur Chloe Coscarelli and celebrity chef Tom Colicchio have filed suit against BC Hospitality Group LLC after receiving what they claim are threatening letters over their Supernatural meatless pop-up in a private dining room at Colicchio’s Craft New York.

Coscarelli and Colicchio debuted the three-week Supernatural “collaboration” March 12. The next day in a lawsuit, filed in U.S. District Court for the Southern District of New York, the two claimed BC Hospitality Group, or BCHG — led by James Haber and ESquared Hospitality — had “embarked on a vicious campaign to interfere with, disrupt and outright stop Chloe’s growing success at all costs.” 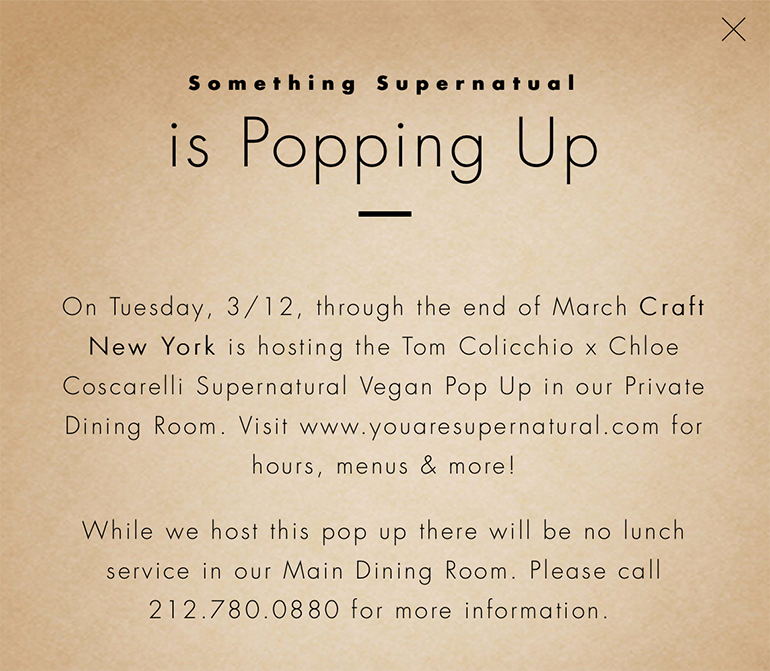 Ronald Schutz, partner at Robins Kaplan LLP and lead counsel for Coscarelli, said in an email that BCHG and its investors “are trying to bully and intimidate chef Chloe from ever working as a chef under her own name. This lawsuit is our response to their latest threat.”

In a lawsuit filed last April, Coscarelli sued New York-based ESquared Hospitality LLC, which owns the By Chloe chain she helped found, after she was expelled as a partner. Coscarelli claimed trademark infringement and other civil code violations. An arbitrator ruled in 2017 that ESquared could terminate its ties with Coscarelli over the By Chloe concept.

But Coscarelli and Colicchio allege BCHG has threatened them over the new collaboration.

“Not one full day after Chloe and Colicchio opened Supernatural, BCHG unleashed its lawyers to spare no expense to try to shut it down,” their lawsuit claims. “BCHG’s corporate lawyer served a threat letter on Chloe and Colicchio that accused them both of federal trademark infringement.”

Emails to By Chloe’s media representatives had not been returned by press time, but a spokeswoman told the New York Post the Supernatural branding was close to what Coscarelli produced in the By Chloe relationship.

“In the interest of both parties’ customer experience, we sent a letter asking them to change or remove the specific similarities in the branding to avoid any further misunderstanding,” the spokeswoman said in a statement. “As a champion in an inclusive plant-based movement, we want to ensure there’s no confusion between By Chloe and other plant-based brands.”

Coscarelli and Colicchio, in their lawsuit, said the collaboration of Supernatural features a concept-focused menu.

“Chloe and Colicchio debuted the menu for Supernatural together,” the lawsuit said. “For lunch (and select dinner times), this menu features creative, healthy and vegan options, like Beet Mac & Cheese, Cauliflower Tacos and an ‘animal lover burrito,’ among other delicious items. And for dessert, they offer ‘sprinkle cake’ and ‘chocolate s’mores cookies.’” The pop-up is scheduled to close March 30.

According to court filings, BCHG letter received by Coscarelli and Colicchio charges her with violating an old agreement she signed when first launching By Chloe years ago. That agreement is referred to as an NFL, or name, face and likeness agreement.

They are asking the court to rule that the Supernatural pop-up does not infringed on BCHG’s By Chloe trademark, that the name-face-likeness agreement was not breached and for a recovery of attorneys’ fees and court costs.

Trademark disputes between chefs and investors have increased in frequency over the past few years.

Coscarelli’s lawyer, Schutz, added that the By Chloe owners “are using their unlimited resources and vast wealth to try and squash a young woman entrepreneur chef.  We hope the justice system sees how outrageous this is and puts a stop to it.”