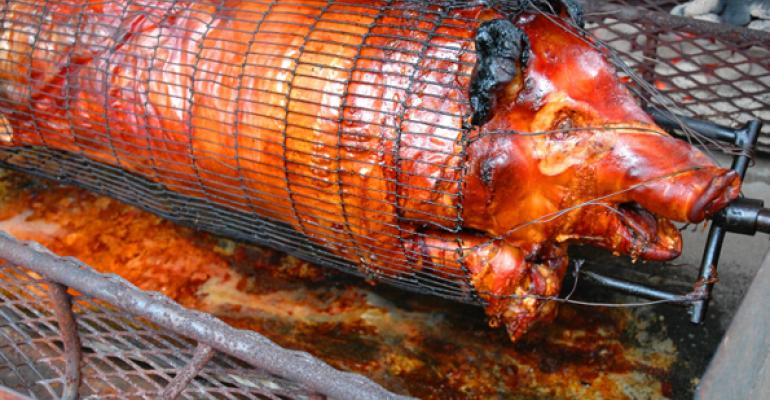 Any discussion about restaurant menus inevitably leads to a conversation about farm-to-table cooking. Farmers have become behind-the-scenes stars of what we eat at many better restaurants. Left out of the discussion, however, are ranchers, who are also instrumental in the creation of great menus. This oversight was rectified in Aspen when Food & Wine editor Dana Cowin moderated a discussion about the relationship between chefs and ranchers with super chef Mario Batali; San Francisco chef and proponent of offal cookery Chris Cosentino; and Anya Fernald, co-founder and c.e.o. of a group of innovative agriculture companies that strive to make good food the old-fashioned way on a large scale. She also operates a restaurant/butcher shop that utilizes every part of the animal.

Cowin: What is wrong with the large production of animals in this country.

The industrial American meat complex has done a good job of delivering cheap protein. In doing so they created all sorts of negatives relating to animal health, safety and a lack of flavor in the meat. But they accomplished the mission of delivering a cheap product, and Americans are now realizing they want something more.

Cowin: Now it seems in the last five to seven years, chefs have embraced the whole animal in a big way. Everywhere chefs are roasting whole animals, and has it gotten to the point where it's a trend or a fad?

Cosentino: Everybody in this country roasts a whole animal every year: It's called Thanksgiving. When you look at that it’s convivial. You spend time with your family and enjoying ourselves. We're not doing anything new with this roasting of whole animals. That's not a negative; it's a positive. We do a thing for 18 people in the restaurant where we'll roast a whole pig. It's not a waste, but rather a smart way to showcase the animal.

Fernald: When we deal with chefs we find that they often want to buy that box of loins and chops, which accounts for 9 percent of the animal. It's challenging for most chefs to utilize the whole animal, but the trend to use the whole animal is a good thing.

Cowin: Mario, you were the first in America to introduce beef and pork cheeks to this country. How hard was that to get Americans to eat these off cuts of the animal, including kidneys and heart?

Batali: When we opened Babbo we decided that we wanted to work with the whole animal. There are less kidneys then there are pork loins. So being served a kidney is a win, not a loss. The easiest way to introduce non-traditional cuts is to use them in pastas and ravioli. We would also send out small tastes of head cheese and things like that. It's like being a crack dealer. You give them a little taste and they like it and eventually come back and ask you for them because it's delicious.

'Headed in the right direction'

Cowin: How confident were you that you could sell things like calves’ brains ravioli?

Batali: We always say at the restaurant that maybe 5 million people in New York City hate us, but at least 7 million others don't. The trick is that you would never put something on the menu like a lung sandwich. You call it something else or give it a sexy foreign name. Then it sells.

Fernald: At our butcher shop we always sell out of lamb. Most time your customers will find you, and often times they are Lebanese or Europeans who are used to eating these cuts. Offal items didn't go out of style years ago because people didn't want them, but rather they are very delicate and perishable and butcher shops and restaurants didn't want to keep them around because they could easily lose money.

Cowin: How do you deal with vegetarians and vegans?

At my restaurant it's no problem for them to eat. We have plenty of vegetables. In fact, vegetables are my highest cost because I buy them from local farmers. And I also treat vegetables like meat and roast them and imbue flavor into them.

Batali: Flexitarian is a smart way to eat. Nobody needs to eat meat three times a day. Introducing vegetables into your meal makes sense.

Fernald: What I'm seeing is that people became vegetarians for health reasons. Now it's more about respecting the land and the great things it produces. I'm with Mario. A flexitarian diet that encompasses meat and vegetables is a good thing.

Cosentino: Meat doesn't always have to be at the center of the plate. When I've traveled to Asia I often find that they will cook their vegetables in pork fat to give them flavor without overwhelming the palate. But when they do eat meat around the world, they often eat off cuts and a lot of times raw. In Japan, I've eaten chicken gizzards, chicken sashimi and raw beef tripe. It's delicious.

Fernald: I lived in northern Italy and at butcher shops they would often give small children a taste of raw pork sausage and kids love it. At my butcher shop, we offer a raw taste of all our meats because we know they've [the animals] been raised in a way we know is safe and healthy.

Cowin: Why is charcuterie so popular now in this country?

Batali: Anyone can throw a steak on the grill, but making salumi and things like that takes great care and time. People appreciate it. It also shows this country is headed in the right direction.