Christina D’Angelo has been promoted to executive chef of Boulud Sud in New York City. She joined the restaurant straight out of culinary school in 2012 as a line cook and worked her way up to executive sous chef until the restaurant’s temporary closure in 2020 as a result of the pandemic. It has reopened with her at the helm.

Jeffrey Hunter has been promoted to executive sous chef of the Lotte Hotel in Seattle. He was a member of the opening team of the hotel, which opened a year ago, and has been overseeing the food at its Charlotte Restaurant & Lounge.

Daeik Kim has been promoted to executive chef from sous chef of Jungsik in New York City. He attended culinary school in South Korea and then continued his education at the Culinary Institute of America in Hyde Park, N.Y., and joined Jungsik after graduating in 2018.

The Adolphus hotel in Dallas has named Jin Lee executive chef. Lee has more than 15 years’ experience in restaurants, most recently as banquet & catering chef of the Terranea Resort in Palos Verdes, Calif.

Eddy Leroux has been promoted to executive chef from chef de cuisine of Restaurant Daniel, Daniel Boulud’s flagship restaurant in New York City. He has been at the restaurant since 2004, having started as executive sous chef. Before that he was in Paris, working at Lucas Carton under Alain Senderens, one of the early pioneers of la nouvelle cuisine.

Linda Luo is the new executive chef of The Tavern, formerly Tavern by WS, in New York City’s Hudson Yards’ shopping center. Most recently she was executive sous chef of Intersect by Lexus in New York, where she worked for nearly four years.

Rhonda McCullar has been promoted to chef de cuisine from executive sous chef of Uchi Dallas and Uchibā, the cocktail bar upstairs.

A native of Ennis, Texas, McCullar worked as a sixth-grade science teacher while studying at Le Cordon Bleu Institute of Culinary Arts in Dallas, from which she graduated in 2012. She worked for Marriott Hotels before joining Uchi in 2015, where she helped the kitchen reduce food waste by working to incorporate unused ingredients in new dishes. Hai Hospitality, which owns Uchi, said in the announcement of her promotion that she brings unique perspective to menu development because she’s a vegetarian.

Jason Moniz has been named are executive chef of West Hollywood Hotels, which includes the Chamberlain West Hollywood, Montrose West Hollywood, Le Parc Suite Hotel and The Grafton on Sunset. The 30-year culinary veteran grew up in Hawaii and spent many years operating restaurants in the San Francisco Bay area, including Dona Tomas, Flora, Tres, Barbacoa, Locavore and Philomena.

Suyoung Park has been promoted head of New York Operations for Jungsik restaurant in New York City. She trained under chef Jung Sik Yim at Jungsik Seoul in South Korea before arriving in New York City in 2019 to take the helm of the restaurant’s New York location.

Ryan Poli has found a new home after leaving The Catbird Seat in Nashville at the end of 2018. He is now executive chef of Bobby Hotel, leading all of the property’s culinary operations at the Nashville property.

The Chicago native is an industry veteran, having worked under Jean Banchet at Le Français in Wheeling, Ill., and under Thomas Keller at The French Laundry in Yountville, Calif., before moving to Spain and working for Sergi Arola at La Brioche in Madrid. He went on to hold executive chef positions in Chicago at Perennial and Tavernita, among other jobs, before taking time off to travel the world and hone his skills, including stages at Noma in Copenhagen and Blue Hill at Stone Barns in Pocantico Hills, N.Y., eventually landing in Nashville at The Catbird Seat.

Ysaac Ramirez is the new chef of 4 Saints, the rooftop restaurant at Kimpton The Rowan Palm Springs hotel. He also is overseeing Juniper Table, the all-day restaurant next to the hotel’s lobby, as well as the poolside restaurant High Bar and all banquets and catering.

Most recently he was executive chef of King’s Highway at Ace Hotel & Swim Club, also in Palm Springs, Calif.

Shaun Velez is the new executive pastry chef at Restaurant Daniel in New York City, a position he most recently held at sister restaurant Café Boulud. The native New Yorker graduated from the French Culinary Institute, now the International Culinary Center, in that city in 2008 and immediately joined Boulud’s Dinex Group in the pastry kitchens of Boulud Sud and Restaurant Daniel before becoming executive pastry chef of Café Boulud in 2018.

German Villatoro has been named vice president of culinary for Backal Hospitality Group in New York City, overseeing food & beverage operations at Versa Restaurant and Rooftop at the Renaissance New York Midtown Hotel, the event spaces Apella and Riverpark, event management company State of the Art Enterprises, CNVS Event Space, AOG Design, Cellar Dog and all events at the Mandarin Oriental New York. He will also spearhead menu development for the company. Most recently he was director of culinary at events group Convene. 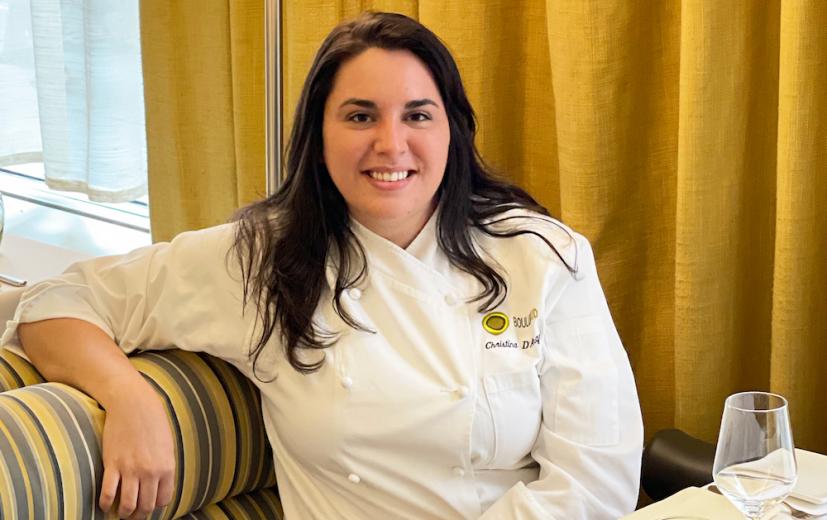 Next Up
Chefs on the move: Springtime appointments across the country
Start Slideshow ›