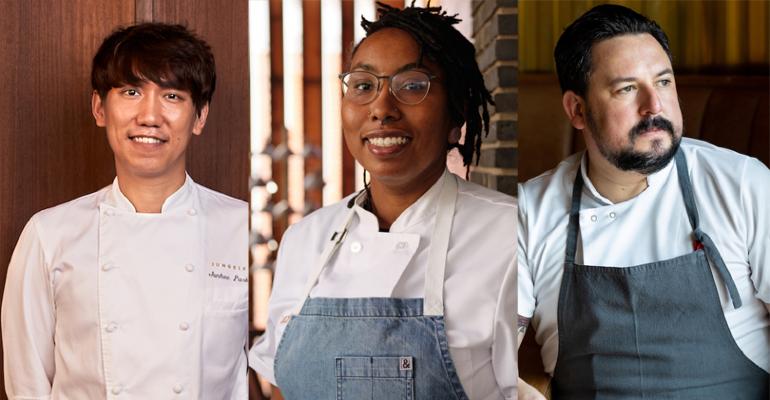 Start Slideshow ›
Plus other new jobs at restaurants, hotels and companies around the country

Two of Daniel Boulud’s landmark restaurants in New York City, Restaurant Daniel and Boulud Sud, have reopened with new executive chefs. Christina D’Angelo is now running the kitchen at the former, and Eddy Leroux is heading up the latter. Meanwhile Shaun Velez, who was executive pastry chef at Café Boulud, now has that job at Daniel.

Also in New York, Suyoung Park has been promoted from executive chef to head of New York operations and Daeik Kim is taking her previous position, and Linda Luo is the new executive chef of The Tavern, which was called Tavern by WS when Eli Kaimeh was the chef there.

Ryan Poli, who has been consulting and doing other odd jobs since he left The Catbird Seat in Nashville at the end of 2018, is back in Nashville, now as executive chef of Bobby Hotel.

Jin Lee is now running the kitchens at the Adolphus hotel in Dallas, and Rhonda McCullar is continuing to rise through the ranks of Hai Hospitality, having been promoted to chef de cuisine from executive sous chef of Uchi and Uchibā, a position she got last year.

And on Hawaii’s Big Island, Ian Scollay is executive chef of the private residential club Kohanaiki.