Brian Arruda is the executive chef of Boulud Sud in New York City. Most recently executive chef of Bar Boulud’s Boston location, Arruda grew up in Stonington, Conn., and started his career as a breakfast cook at his family’s first restaurant, The Dogwatch Café. He graduated from The Culinary Institute of  America in Hyde Park, N.Y., and spent formative years after that in Las Vegas, spending two years at Bouchon Bistro, where he progressed to chef tournant. He joined Daniel Boulud’s group in 2015 at Café Boulud in Palm Beach, Fla, eventually becoming executive sous chef before moving to Boston.

Spencer Blake quietly took over as executive chef of Clever Rabbit in Chicago and has rolled out a new menu with item such as celery root agnolotti with braised oxtail, and brook trout with hickory nuts, Swiss chard and wild rice. A graduate of The Culinary Institute of America, Blake’s past experience includes working under chef Paul Virant at Vie and Perennial Virant, and under Carrie Nahabedian at Naha. He considers those two chefs to be his mentors.

Frederic Boldron is executive chef of South City Kitchen Avalon in Alpharetta, Ga. Originally from France’s Mediterranean coast, he studied cooking in Nice and then worked in Paris before moving to the United States in 2005. His most recent restaurant position was as executive sous chef of the Novotel Miami Brickell.

Walter Bunn is chef de cuisine of 7 Mile Kitchen in Carlsbad, Calif. Most recently he was the opening of the Moxy, an Azul Hospitality restaurant in San Diego.

Jose Casals is head chef of Acqualina Resort & Spa in Sunny Isles Beach, Fla. Most recently, Casals was a professor at Miami Culinary Institute at Miami Dade College where he developed study-abroad programs to France, Italy, Spain, Peru, South Africa and China. He is himself a graduate of Florida Culinary Institute in West Palm Beach and is a veteran of the foodservice operations at Walt Disney World in Orlando, having held a variety of culinary positions there.

Desmond Chow is executive chef of Pabu’s Boston location. Originally from Hong Kong, Chow grew up cooking in Chinese restaurants there before moving to the United States. From there he traveled the world, focusing on his sushi techniques, and among his accolades is the award for best performance in the 2017 World Sushi Cup.

Carlos Cruz has been promoted to culinary director of 16” on Center, a Chicago-based hospitality and live music group. Originally from the Houston suburb of Spring, Texas, Cruz worked the line at Boka restaurant under chef Giuseppe Tentori while getting a degree in business management at Kendall College. He then staged in Europe for six months — at Noma in Copenhagen and Roca Moo in Barcelona — before returning to Chicago, spending two and a half years as sous chef at Longman & Eagle before joining 16” on Center as executive chef of Saint Lou’s Assembly. After a 3-month hiatus in South America, he returned to 16” as executive chef of The Promontory before taking his current position.

Carolyn Dunn is executive chef of The Original El Taco in Atlanta, which is part of the Fifth Group. She has worked for that group for some time, holding positions at Lure and the South City Kitchen locations in Midtown Atlanta and Buckhead before taking her current post.

Eric Faivre is executive chef of the Montage Kapalua Bay on the Hawaiian island of Maui. Most recently he spent the past four years as vice president of food & beverage at for Aqua-Aston Hospitality, based in Honolulu, which operates properties on four of the Hawaiian islands as well as in Orlando, Fla., and Costa Rica.

Miguel Antonio Gomez Fernández is the executive chef of 26 Sushi & Tapas in Surfside, Fla. Raised in the port city of Iquitos, Peru, he most recently was conceptual chef of Pisco y Nazca in Miami and Seek & Find restaurant in Coral Gables, Fla. Before that he was chef de cuisine at La Mar, celebrity chef Gastón Acurio’s restaurant in San Francisco.

Thomas Gorczyca is executive pastry chef of LondonHouse in Chicago. Most recently spending six years as pastry chef for the InterContinental Hotel Chicago, he previously was baker at the Sheraton Harrisburg-Hershey in Harrisburg, Pa., and before that was lead pastry cook at The Hotel Hershey in Hershey, Pa.

Wade Greenwood is the executive pastry chef at Trace at the W hotel in Austin, Texas. Originally from McAllen, Texas, Greenwood spent many years in San Francisco-area kitchens after attending the San Francisco Baking Institute, including The Liberty Café, Mission Beach Café, The Hotel Villa Florence and The Cliff House.

Cleophus Hethington is the new executive chef of The Lawrence in Atlanta.

Most recently chef de party at Lazy Betty, also in Atlanta, before that the Miami native was a sous chef for Groot Hospitality, based in Miami Beach, Fla., and prior to that he was executive chef of Shelley’s Miami.

Jamie Kenyon is executive chef and partner at Bottino in New York City. Originally from Manchester, England, Kenyon began his career working for Daniel Boulud’s Dinex group at Daniel and Bar Boulud before working at Manzo, the meat-oriented restaurant at Eataly’s Madison Square Park location. He went on to work at Perla before becoming executive sous chef at Lupa. He went on to be the opening executive sous chef at La Sirena, spearheading that restaurant’s private dining. He then returned to Eataly, overseeing operations of six restaurant there before joining Bottino.

Michael Levine is chef de cuisine of Twenty at the Westin Carlsbad Resort & Spa in Carlsbad, Calif. Most recently the self-taught chef ran the kitchen at Union Kitchen and Tap in Encinitas, Calif.

Michael Lewis is chef de cuisine of Calistoga Ranch in Calistoga, Calif., including its signature restaurant, The Lakehouse. Most recently the operator of his own catering company, Lewis Provisions, he also had worked at Cento Pasta Bar, Bestia and Herringbone in Los Angeles and at Boulevard in San Francisco.

Darry Liu is the executive chef of Kōyō, which opened in New York City in November. Liu worked for Masa alumni Jimmy Lau and Nick Kim at their New York restaurants Neta and Shuko, with a brief stint in between working the line at Eleven Madison Park. Before joining Kōyō, he spent several months working at Uchū Sushi Bar, also in New York.

Dan Matthiesen is executive chef of Bookstore Bar & Café, a Kimpton property in Seattle. The Washington native has been working in Seattle restaurants for the past decade, most notably for seven years as chef de cuisine of LloydMartin in Seattle. Most recently he was on the culinary team at Outlier restaurant.

Amy Mehrtens is chef de cuisine of Copper Vine in New Orleans. A graduate of The Culinary Institute of America in Hyde Park, N.Y., her decade of work cooking in New Orleans includes stints as sous chef of Commander’s Palace and interim executive chef of Café Adelaide.

Bradley Nicholson and Susana Querejazu have been named executive chef and executive pastry chef, respectively, of Lutie’s Garden restaurant, slated to open this spring in Austin, Texas, at the Commodore Perry Estate. Most recently the couple was in San Francisco, where Nicholson was executive sous chef at Birdsong and Querejazu was pastry sous chef at Saison. The husband-and-wife team previously had lived in Austin and were chef and pastry chef of Barley Swine until 2017.

Andres Padilla is the chef of The Plaza Hotel Pioneer Park in El Paso, Texas, a 130-room property set to reopen early this year. Padilla comes to El Paso from Chicago, where he was culinary director of Rick Bayless’ Frontera Restaurants. Before that he was at Douglas Rodriguez’s restaurant De la Costa, also in Chicago. 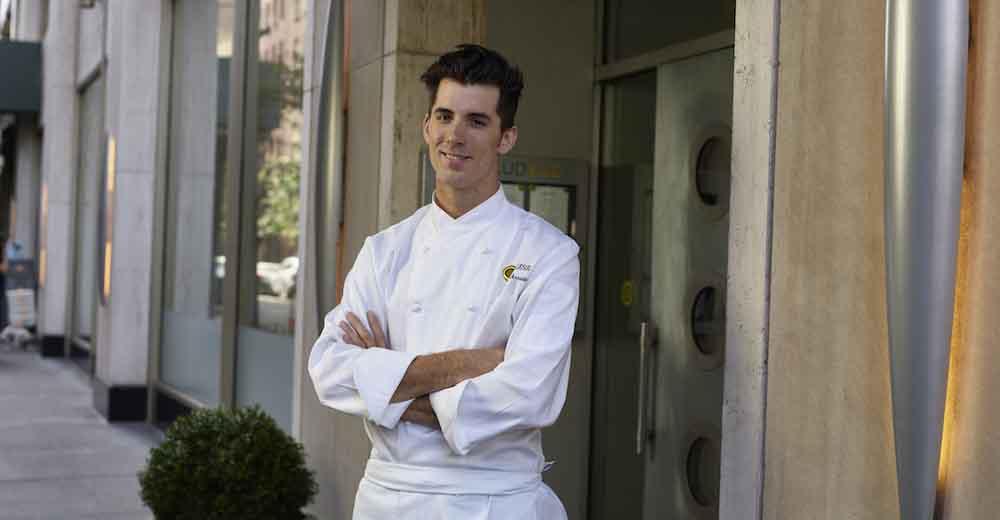 Next Up
Chefs on the Move: New appointments for early fall
Start Slideshow ›