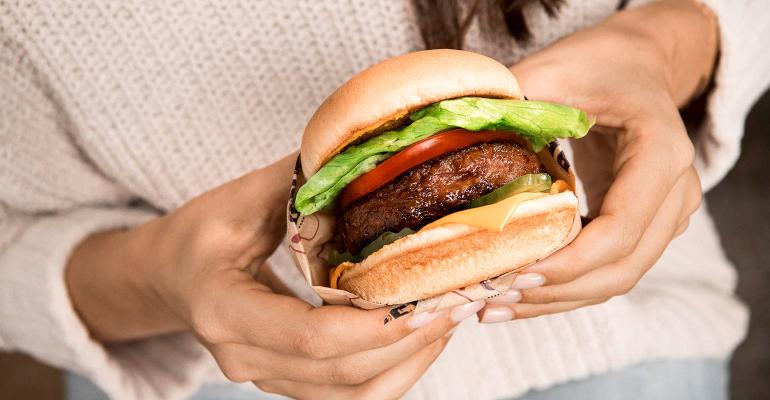 Veganism has always been an unapologetically strident movement, but its products have gone decidedly mainstream.

In fact, 44 percent, by volume, of the plant-based food that’s being shipped to operators of independent restaurants and small chains is beef alternatives, according to the NPD Group, a consumer-research firm. Most of that is in the form of meatless versions of that most quintessentially American food: the hamburger.

It began with vegans, but now what was once known as a veggie burger has been embraced by meat eaters looking to reduce their intake of animal flesh, for both health reasons and to mitigate global warming.

As a result, there is a growing niche within the quick-service world of emerging plant-based-burger concepts — restaurants that by all appearances offer the same familiar menu of burgers, fries and shakes, but without animal products as ingredients.

One such concept is Monty’s Good Burger, which opened its first location in Los Angeles in August and a second one in nearby Riverside, Calif., in September.

“Monty’s is a burger joint with good music and happy people and a dog on the wall that happens to be serving plant-based burgers,” said Nic Adler, co-founder of Monty’s Good Burger.

The dog is Monty, pet of Bill Fold, who with Adler has produced vegan events such as Eat Drink Vegan, which draws 10,000 people a year.  Adler is also the culinary director of the Coachella Valley Music and Arts Festival.

Busy building the vegan community, it hadn’t occurred to Adler to try to effect change in the much broader space occupied by omnivores until he went to the launch of the Impossible Burger, a meatless product developed in 2011 and manufactured in the San Francisco Bay area.

The Impossible Burger is made from wheat protein, potato protein, coconut oil, carbohydrates from a Japanese yam, xanthan gum and heme — a protein in hemoglobin, although Impossible Foods derives it from plants — that makes the product appear to bleed.

Impossible Foods founder Pat Brown developed it to appeal to meat eaters and it worked. A sign of his success is the fact that White Castle, arguably the quintessential greasy burger joint, recently introduced it to all 377 of its restaurants in 13 states after testing it in April at 140 locations in New York, New Jersey and Chicago. The sliders are $1.99 apiece, a considerable upcharge from the chain’s 73-cent slider.

Monty’s burger is $11 for a 2.25-ounce patty that starts as a ball that’s smashed thin on a griddle that, not unlike White Castle’s, already has chopped onions cooking on it. The thin patty doesn’t bleed the way a 3- or 4-ounce Impossible patty might, but Adler says it gets an agreeable meat-like char.

It’s served on a potato bun from a local bakery along with griddled onions, lightly brined pickles, lettuce, tomato, a vegan cheese substitute and a house spread similar to Thousand Island dressing.

“Most people get it with tots or fries,” Adler said, just like they might with any burger, and that’s the point.

Jeff Harris has a similar idea with Plant Power Fast Food, which he opened with partners Mitch Wallis and Zach Vouga in San Diego in 2016, followed a year later by one in a former Burger King location in nearby Encinitas, Calif. Their first franchised location opened in Redlands, Calif., this summer.

Harris said all three of the founders are vegans, and they wanted to bring healthier products free of genetically modified organisms to the fast-food space occupied by vendors of “delicious, consistent and convenient food.”

The menu includes raw items, salads, juices and smoothies, as well as vegan tenders made with chicken substitute, plus burgers, fries and shakes, “So we could demonstrate a plant-based alternative to Mr. and Mrs. Joe Average,” he said.

The result was surprising, Harris said.

“We knew that we would attract people, but what we didn’t expect is that we would be profitable,” he said. But the San Diego location grossed $1.1 million in the first year and $1.9 million the second year, with a 20 percent profit. He said they’re on track to do $2.3 million this year.

Plant Power doesn’t use the Impossible Burger. Black bean patties are available, but Plant Power also developed its own proprietary “beefy” patty made mostly with soy, plus “secret ingredients and secret seasonings.”

Pricing is higher than the lower end of fast food, but lower than fast-casual. The Classic burger is $5.95, and the popular Big Zac (two “beefy” patties, special sauce, lettuce, American “cheese,” pickles and onions) is $8.95.

Harris said clear messaging is important, which is why terms like “beefy” and “cheese” are put in quotation marks.

He and his partners’ goal is to be large and national, with hundreds of locations.

“We have to be in the fast-food category,” he said. “We don’t believe that we can reach millions of people if we’re outside of that basic price point. … We understand that the fast-food market is now over $210 billion. We believe that this market is ready for a new, natural, healthy brand.”

Matt de Gruyter wants his Next Level Burger to have 1,000 locations.

Also a plant-based burger joint, the first Next Level Burger opened in Bend, Ore., in the summer of 2014 and now has seven locations, Oregon, Washington State, California and New York. An eighth location is slated to open in October at the headquarters of Whole Foods Market in Austin, Texas.

Five of the existing locations were opened in partnership with Whole Foods, though de Gruyter says they’re built “very much removed from the Whole Foods experience,” with separate entrances.

The top seller is the Signature Burger, made with organic quinoa and mushrooms, among other ingredients, topped with avocado and garlic aïoli. They also have a black bean burger, a mushroom-based patty and a Beyond Burger, a branded product based on pea protein.

“They really give you different experiences,” de Gruyter said, adding that they’re priced at around $8 in Portland, Ore., and a bit more in other markets.

“This didn’t come out of a desire to maximize an emerging trend or jump on a business opportunity, but to share with my wife, kids, friends and family the all-American burger-joint experience reinvented for the 21st Century,” he said.

Of course, plant-based burger options are being introduced at non-vegan restaurants, too.

In fact, shipment of plant-based protein by broadline foodservice distributors rose by 19 percent by volume in the year ended March 2018, according to NPD.

That’s thanks to chains like BurgerFi, based in North Palm Beach, Fla., which added Beyond Burgers to its more than 100 restaurants. New York-based Bareburger, with around 50 units, serves both the Impossible and Beyond burgers as plant-based alternatives.

Yalla Mediterranean, a seven-unit fast-casual restaurant based in Manhattan Beach, Calif., rolled out a new meatless option in August to complement its existing falafel option.

They combine the Impossible Foods product with Mediterranean spices including coriander, garlic and dried mint and use it as an option in its wraps, salads and “plates,” which also have basmati rice, vegetables, lentils, pita and sides such as spiced feta cheese, hummus and tabbouleh. Yalla charges an extra $1 for steak and salmon, and the Impossible Protein, as it’s called on the menu, commands a $2 surcharge.

Slater’s 50/50 charges even more for its Impossible Burger: $17.99 at its Las Vegas location, compared to $12.99 for its signature burger, which is made with 50 percent Black Angus beef and 50 percent bacon.

“People who order it definitely say it’s worth the money,” said Cindy Sun, general manager of the Las Vegas restaurant, one of 11 locations in Calif., Hawaii, Nevada and Texas.

“A lot of guests come in to cross off that they’ve had the 50/50 burger,” she said, and for their friends who tag along, who might be vegetarian or who just don’t want that much beef and bacon, the Impossible Burger has proven to be a popular option, holding its own in terms of sales volume with the other burgers on the menu — apart from the original 50/50 and bacon cheeseburger, which are the two most popular — despite the upcharge, Sun said.

Mogan Anthony said it might take a while for new plant-based options to sell well once they’re added to the menu. The chef of Village Social, with locations in the suburban New York towns of Mount Kisco and Rye, offers a house-made meatless patty of quinoa, brown rice, zucchini, mushroom, chickpeas and spices, as well as the Impossible Burger.

“The Impossible Burger took a little time, but once it took off, now people are demanding it,” he said.

“More and more guests are trying out non-meat menu items,” he added.