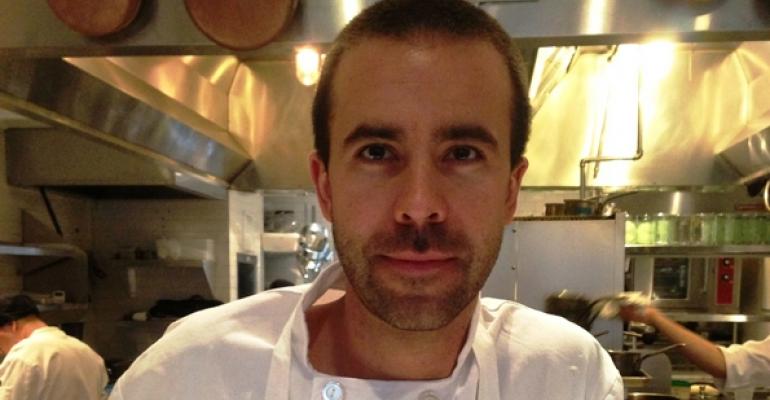 At BLT Fish, he’s putting his own mark on the dual-concept restaurant’s menu, which features New England-style fish-shack cuisine on the ground floor and fine-dining fare upstairs.

The South Dakota native got his start cooking at restaurants in Colorado before moving to California wine country, where he was chef de partie at Redd in Yountville.

Most recently he was the chef at Millwrights in Simsbury, Conn., where he worked with Farmington Valley farmers to provide his guests with the region’s seasonal bounty.

I love it. The big selling points to me were it’s a good company and it’s a seafood restaurant. Seafood’s always been close to my heart. Even as a line cook I always worked the fish station.

I also opened in a steakhouse, where the meat cuts never change, so I put my creative energy into fish. It’s always consumed a lot of my thought process.

The proximity [of BLT Fish] to the Greenmarket was huge to me, too — to be that close and to use the produce on a regular basis.

Is there a lot of fish to cook in your home state of South Dakota?

I actually grew up on a lake. We were always fishing, scuba diving, snorkeling, spear fishing, and the restaurant I worked at in high school was on the harbor. So there was a lot of fresh fish being offered.

It was a lot of bass and walleye, which you’ll see on menus sometimes even in New York. But I like most fish that comes from the ocean a lot more. Freshwater fish usually tastes really muddy, but walleye doesn’t.

Before joining BLT Fish you were chef de cuisine of Millwrights in Connecticut, where you also worked with farmers.

Yes. The food was really progressive for the area, and we used all those local farmers, but I didn’t have them all in one place. And those guys still struggle to keep things consistent and available.

At the Greenmarket, they’re ready for me. I can order things beforehand. It’s much easier there.

What changes have you made to the menu at BLT Fish?

First I had to learn how to operate the facility. It’s almost two different restaurants under one roof. But I did want to get some immediate food identity on the menu, so I did a four-course Greenmarket-inspired tasting menu and paired each course with a different rosé, because it was summer.

Now most of the á la carte items have been changed, and the two big things I’m trying to completely make over are the raw items and side dishes on the third floor.

What are you changing at the raw bar?

The first floor of the restaurant is a New England beach-y fish shack. It has a big raw bar focus and it’s very classic. I’m separating it from the [fine-dining] third floor and made the raw bar selections a little more composed. That classic presentation is perfect for the ground floor. My food’s a little progressive, so it’s a little strange when a shrimp cocktail gets set next to some of the other presentations.

So I’m doing some things that aren’t just the seafood sitting there naked. I’m making a seasonal mignonette, so in the summer it’s a green tomato mignonette, maybe green apple in the fall, rhubarb in the spring. Cocktail sauce is there for people who want it, but we also serve a yuzu aïoli, which is more what I’d like to have on a shrimp cocktail.

With seafood and seasonal produce subject to inconsistent supply, what do you do when something you planned for doesn’t arrive?

I start running a dish as a verbal special, and if the quantity of an item turns out to be limited, it’s not something that appeared in print, so the guest doesn’t feel like they’ve missed out on something. I do that for a couple of days. It gives the staff time to adjust it, and it gives me a chance to test the farmers and see if I can get something for a whole week.

I trust what the farmers say, but there’s no guarantee in this business either. Running it as a special, giving it a week, lets me feel the situation out to see whether it’s going to be consistent enough to run on the menu.

I also communicate to them: ‘Hey, I put this on the menu. If you’re not going to have it on Saturday, please tell me so I can change it.’ And they’re pretty good about that.

What dishes do you have planned for the fall?

Striped bass [season] closes really suddenly from state to state. So the striped bass dish [with ham hock, chanterelles and Choron sauce] that was so perfect will have to change. So we’ll probably go with something like monkfish or daurade, something that can hold up to a bolder preparation. I’ll definitely start cooking with more meats. A lot of fish dishes will be accented with things like bacon, sweetbreads, maybe short ribs — some clever surf-and-turf-y things — once things cool down.