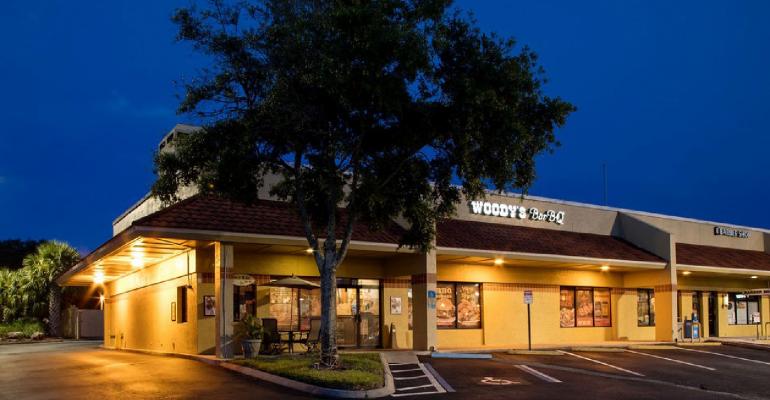 In addition to funds raised through dine-in and takeout orders, the event will raise funds through its silent auction – featuring the donation of goods and services from other local businesses and corporations.
News>Casual Dining

In celebration of its 40th anniversary last year, Florida-based franchise company - Woody’s Bar-B-Q – hosted an event to raise funds and awareness for Tim Tebow Foundation’s (TTF) Anti-Human Trafficking Ministry. Within a couple of hours, Woody’s raised $6,000 and helped bring the matter of human trafficking to the forefront for everyone in attendance. One year later, the classic Southern BBQ chain will host a repeat of the event – with the hope of doubling the amount of funds raised. This year’s event will be hosted at Woody’s Bar-B-Q of Ponte Vedra Beach – located at 226 Solana Road – on October 2 from 2-4pm. The two-hour event will include an art show featuring the works of Diana Patterson, as well as a silent auction, entertainment from a magician and DJ, and – of course – great food, which has been the hallmark of the company for 41 years.

“Even for those who can’t be in attendance at the event, they can still help us make an impact on this very serious issue in our country,” said Yolanda Mills-Mawman, President, COO and Co-Founder of Woody’s Bar-B-Q. “A portion of the proceeds from all dine-in and take-out orders that day at all four Corporate locations – Ponte Vedra Beach, University Boulevard in Jacksonville, Green Cove Springs and Fernandina Beach – will benefit the Tim Tebow Foundation’s Anti-Human Trafficking Ministry. With thousands of victims of human trafficking in the U.S. alone each year, my co-founder, Woody Mills and I, believe this is not only a very worthy cause, but also an incredibly serious matter that so few people truly know about. We hope to help the Tim Tebow Foundation change that.”

In addition to funds raised through dine-in and takeout orders, the event will raise funds through its silent auction – featuring the donation of goods and services from other local businesses and corporations. Included among those auction items are a 16-person suite at 121 Financial Ballpark during a future Jacksonville Jumbo Shrimp game, a foursome at Marsh Landing Country Club, tickets for four for a Jacksonville Jaguars game, family photo shoot with Steph Owens Photography, one-year family membership at Basics Range & Gun, a beautifully crafted bracelet from Pavlos Jewelry Design and more.  A portion of the proceeds from the sale of artwork bySt. Augustine-based artist, Diana Patterson – which will be on display throughout the event – will also benefit the cause.

The Tim Tebow Foundation’s Anti-Human Trafficking Ministry website indicates that human trafficking generates $150 billion worldwide, with the United States leading all other countries in consumption. Roughly 70% of victims are female and 25% are children. It is estimated that as many as 40 million people in the world today are being bought and sold as modern-day slaves and victims of human trafficking have been identified in every single state in the U.S. TTF believes in taking action to confront this global atrocity – to rescue victims and provide a way out of a life of violence and exploitation to a new life of freedom found in Christ.

To learn more about the impactful ministries of the Tim Tebow Foundation and make a donation directly to the cause, please visit www.timtebowfoundation.org. For more information about Woody’s Bar-B-Q, prospective patrons are encouraged to visit www.woodys.com. If you would like to donate an item to be featured during the 41st Anniversary Celebration silent auction, please email your information to [email protected].

About Woody’s Bar-B-Q®: After opening their first Woody’s Bar-B-Q in 1980, partners Woody Mills and Yolanda Mills-Mawman have spent nearly four decades setting the “bar” higher for classic Southern barbecue. From the humble beginnings of just one location in Jacksonville, Florida, a shared passion for barbecue, and a dog-eared collection of recipes, Mills and Mawman have grown the Woody’s Bar-B-Q brand to locations reaching from the Deep South where barbecue is king to the Northeast and Midwestern fronts. Perhaps best known for their legendary melt-in-your-mouth slow-smoked Signature Baby Back Ribs, Woody’s has also built quite a following among patrons with their secret recipe barbecue sauces and meats, as well as their freshly prepared comfort food-inspired side dishes. Individuals who wish to learn more about becoming a Woody’s Bar-B-Q franchisee are encouraged to visit http://www.woodys.com/franchise/.

About Tim Tebow Foundation: The Tim Tebow Foundation exists to bring Faith, Hope and Love to those needing a brighter day in their darkest hour of need. This mission is being fulfilled every day through 16 initiatives in the fields of Orphan Care + Prevention, Special Needs, Children with Profound Medical Needs, and Anti-Human Trafficking. To learn more about how the Tim Tebow Foundation is serving the world’s most vulnerable and sharing God’s love by fighting for those who can’t fight for themselves, visit www.timtebowfoundation.org.