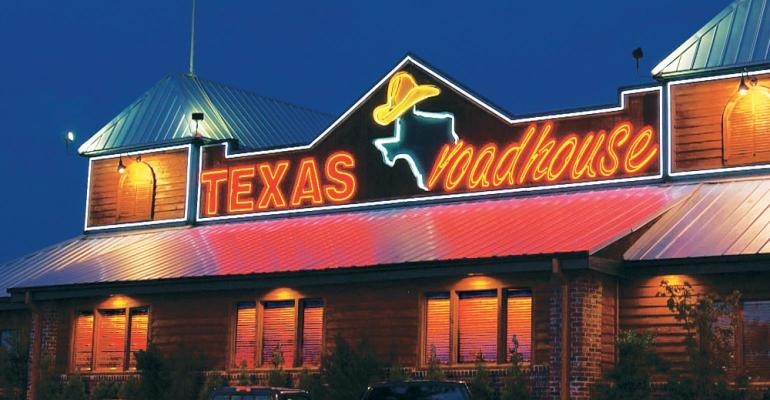 The Louisville, Ky.-based casual-dining company, which also owns the full-service Bubba’s 33 and the fast-casual Jagger’s concept, has been raising prices to deal with commodity inflation, which it expects to be 12% to 14% for the full year. Executives spoke about higher costs on a call with analysts after releasing earnings for the first quarter, which ended March 29.

“Several weeks ago, we implemented our previously announced 3.2% menu increase,” said Jerry Morgan, CEO of Texas Roadhouse. “And to date, we have not seen a negative mix or traffic reaction. That said, we know the consumer is feeling inflationary pressures, so we are closely monitoring spending patterns.” The brand had taken a 4.2% menu price increase in November.

“We continue to expect that year-over-year commodity inflation will moderate gradually as we move through the remaining three quarters of the year,” she said, “Even if inflation moderates, the underlying dollar costs for beef and other high-use items will likely still be higher both year-over-year and sequentially.”

Robinson added that Texas Roadhouse continues its tests of new technology in its restaurants, including waitlist functions for customers and pay-at-the-table options that are in about 100 restaurants.

“The goal would be to get that [pay-at-the-table] for the most part rolled out to all stores by the end of the year,” she said. The company has also tested handheld ordering technology, which she was slower in being sampled, and a new kitchen display system, which has been implemented in one new Texas Roadhouse unit and is planned for an existing restaurant later this year.

“In terms of 2023, we believe we can lower the impact of permitting and building approval delays, so we are optimistic that we will return to a higher level of openings,” he said.

The new restaurants, including those in smaller markets, are seeing strong sales, he said, “which leads to continued healthy returns on our investments. This gives us the confidence that we will still have a long runway for new Texas Roadhouse locations. Also, we are excited by the sales growth that we are seeing at Bubba's. And we have a team in place as we ramp up development for the coming years.”

About 70% of the to-go business is digital, Morgan said, “and many more of our guests are using the waitlist function.”

On the first day of the fiscal year, Texas Roadhouse completed the acquisition of seven franchise restaurants in South Carolina and Georgia for $26.4 million.

Texas Roadhouse, founded in 1993, has more than 670 restaurants 49 states and 10 foreign countries.