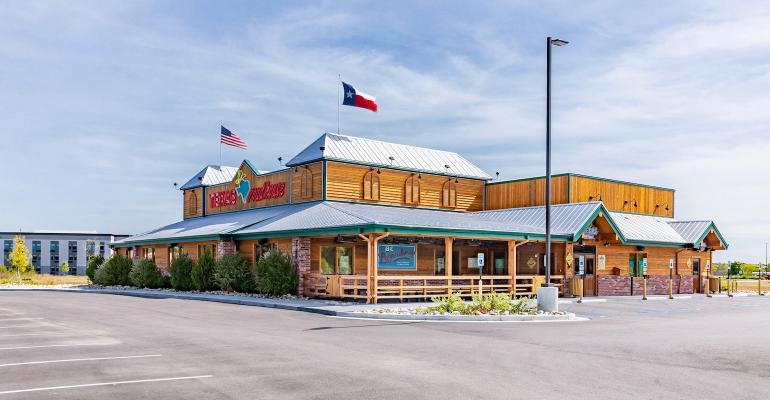 Texas Roadhouse Inc. is seeing its casual-dining customers get back to normalized habits, executives said Thursday.

The Louisville, Ky.-based parent of Texas Roadhouse, Bubba’s 33 and the fast-casual Jaggers released its earnings for the second quarter ended June 28 and said some traffic softness extended into July.

“In the second quarter, we saw our return to our historical seasonal sales trends, which we did not have in 2020 or 2021,” said Jerry Morgan, Texas Roadhouse CEO and president, in an analyst earnings call. “As a result, we experienced a slight decline in our year-over-year total traffic as the increase in our dine-in guest counts was offset by a decrease in the to-go guests.

“We do not believe this reflects a change in overall demand for our restaurants,” he added. “Rather, it appears that more people are getting back to their normal routines when it comes to dining habits, work schedules and vacations.”

“It was great to see that dine-in guest counts at comparable restaurants remained above both 2021 and 2019 levels throughout the quarter,” Morgan said. “It was also encouraging that our restaurants still average nearly $18,000 per week in to-go sales.”

Robinson added that “while our to-go percentage declined throughout the quarter, we are comfortable knowing that part of this decline was driven by a year-over-year increase in the number of guests dining in our restaurant.”

Roadhouse Pay, which allows customers to pay at the table, is now in more than 300 restaurants and about 82% of customers use it, Morgan said.

“The consumer is using it,” he said. “It’s helping them [operators] turn tables a little quicker.”

The company opened a restaurant in Shakopee, Minn., with the new Digital Kitchen technology and expanded it to a conversion. “We just completed our conversion of an Austin, Texas, restaurant,” Morgan said, “and right now, the feedback is very positive: food quality, ticket times, no loss tickets, easy to train employees.”

The company is training on its online ordering switchboard, which should help in to-go orders, he added.

“We want to be able to execute to-go not only for our guests, but we want to have tools that are available to our operators that not only give them confidence to take more orders, but to execute at a high level,” Morgan said.

Restaurant margin, as a percentage of restaurant and other sales in the second quarter, decreased 116 basis points to 16.6%, negatively impacted by commodity inflation of 11.8%.

“We’re not really seeing anything that would lead us to believe pricing isn’t flowing through,” he said, and consumers don’t appear to be changing their behaviors.

Texas Roadhouse, which first opened in 1993, has more than 680 restaurants systemwide in 49 states and 10 foreign countries.

“We remain on track to open approximately 25 company-owned Texas Roadhouse and Bubba’s 33 restaurants this year, with all remaining unopened restaurants currently under construction,” Morgan said. “It is worth noting that any construction or supply chain delays could push a few of them into early next year. We also expect to open two company-owned Jaggers and our first Jaggers franchise restaurant later this year.” International franchisees are on track to open six restaurants this year, he said.