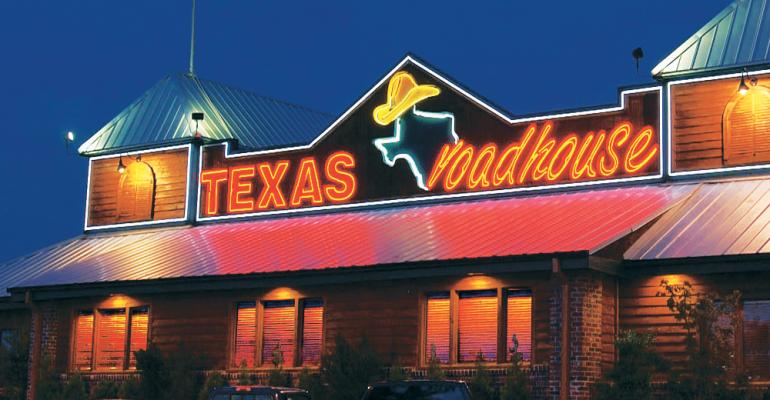 Texas Roadhouse is projecting commodity cost inflation of 10% in the second half of the year, primarily driven by beef prices, as sales volumes have exceeded expectations and forced the company to seek supply on the open market.

In a conference call discussing second-quarter earnings on Thursday, executives from the casual steakhouse operator said they have raised their full-year projections for commodity inflation to 7%, up from the 4% that had been projected in the first quarter.

“With these higher volumes come challenges that may be magnified in the current operating environment,” said Jerry Morgan, CEO of the Louisville, Ky-based company, which also operates the Bubba’s 33 and Jaggers concepts.

The gains were driven in part by off-premises sales but also by higher check averages, as consumers opted for more high-priced entrees and also ordered more appetizers and beverages as on-premises dining returned, the company said. Guest checks were up 21.6% over last year’s second quarter and 8.9% over 2019 levels.

To Go volume has been declining each month, however, with volumes down to $17,500 per week per store in July, or 14.2% of total weekly sales. Off-premises sales remain an important element of the mix for many franchisees, Morgan said, and the company will seek to retain that aspect of its business going forward, with a target of $20,000 average sales volume per week per store.

In addition to the increased commodity costs, the tight labor market is also expected to remain a headwind for Texas Roadhouse for the rest of the year, said Tonya Robinson, chief financial officer. In the second quarter, however, the strong sales volumes, including a high mix of To Go business, led to a 66-basis point improvement in labor costs as a percent of sales compared with 2019, she said.

Most restaurants have been able to attract and retain adequate staffing to support the elevated sales volumes, Morgan said, although some have faced ongoing challenges.

“Had we been able to get them more help, [sales] probably could have been more,” he said.

Despite the cost pressures, Robinson said the company expects restaurant margins to remain in the 17–18% range throughout the second half of 2021.

The company will meet with its franchisees in the coming weeks to discuss potential menu-price increases, which would likely go into effect in late October. Historically, the company has tended to absorb temporary cost increases for commodities and raised prices only to cover longer-term costs such as wage increases, Morgan said.

As of July 2, all domestic company-owned and franchised locations were fully open without restrictions on dining capacity.

The company’s Bubba’s 33 sports-bar concept and its Jaggers fast-casual brand have also continued to perform well, Morgan said, with comp-store sales up more than 20% versus 2019 at Bubba’s and more than 30% versus 2019 at Jaggers.

“The Bubba’s we opened in the second quarter did phenomenal,” said Morgan, who praised the potential for both concepts.

The company expects to open 26–29 company-owned restaurants across all concepts for the full year, including eight that opened in the second quarter. Development costs have also shown indications of inflation, but that is not impacting the company’s expansion plans, Morgan said.