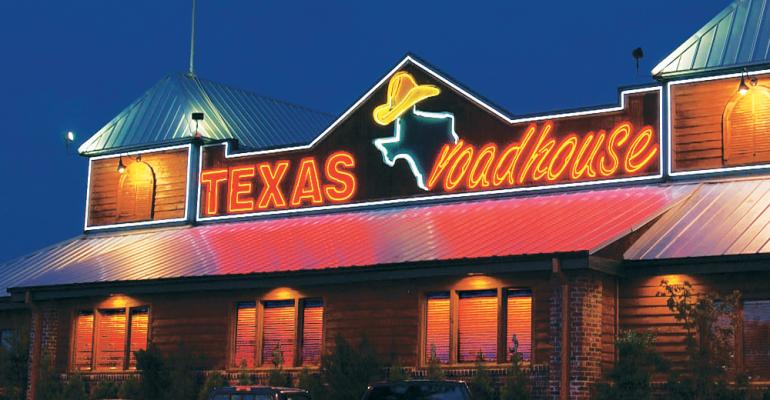 Texas Roadhouse Inc. says same-store sales in the first quarter were down 8.4% at company units and down 8.5% at domestic franchised restaurants.
News>Casual Dining

Texas Roadhouse Inc. pivoted from casual dining to a to-go and curbside-service model amid coronavirus restrictions, and concept founder Kent Taylor says the “play-to-win” attitude of restaurant operators has helped bring back sales in April.

“A few weeks into March, when the ‘you-know-what’ hit the fan, we had two choices: (a) hunker down, lay people off, conserve cash and wait it out; or (b) deal with the reality of each day, pivot, experiment, learn and pivot again,” said Kent Taylor, company founder and CEO, in a letter that accompanied the Louisville, Ky.-based casual-dining brand’s earnings for the first quarter ended March 31.

“We went with (b) and jumped in headfirst,” Taylor said. “We quickly learned from our individual operators, especially some of our crazy, out-of-the-box thinkers, like me, who were not afraid to push the boundaries and try new things.”

“What normally would take six months, we were able to do in just a few days,” Taylor said. “We made the pivot quickly and safely from dine-in to traditional to-go before pivoting again to to-go/curbside before adding family value packs (both hot and cold) and ready-to-grill steaks.  Who knows what our operators will come up with next, but I’m sure it will be amazing.”

Taylor said domestic restaurants were able to learn from restaurants in Taiwan, which experienced the coronavirus impact weeks before the United States.

“First and foremost, we learned the value of personal protective equipment in restaurants, so we quickly ordered gloves, masks and eyewear,” Taylor said in his letter.

“Within a few days, we had gloves in place for all employees (always protocol in the kitchen, but now also mandatory for our front-of-house employees) and were using do-it-yourself masks until personal protective equipment arrived,” he said. “We also began taking temperatures and conducting symptom surveys of our employees to provide another level of safety for guests and employees.”

Texas Roadhouse said that in April the company used cash of about $30 million, including $14 million for capital expenditures. The company expects weekly cash burn to be about $5 million under the current operating models.

“The company continues to monitor federal and state plans to re-open the economy and has developed a re-opening framework for domestic stores,” Texas Roadhouse said in a statement. “This includes the implementation of a hybrid business model with limited capacity dining rooms together with enhanced to-go through curbside service as permitted by local guidelines.  The re-opening process is expected to be a gradual one with the safety of employees and guests as the top priority.”

As of Monday, Texas Roadhouse had reopened dining rooms in about 25 company-owned restaurants under capacity restrictions.

Same-store sales in the quarter were down 8.4% at company units and down 8.5% at domestic franchised restaurants. By month, same-store sales at company-owned units were up 8% in January, up 4.2% in February and down 29.7% in March, when the COVID-19 pandemic was declared.

One company restaurant and 22 international franchised locations were temporarily closed in the quarter.