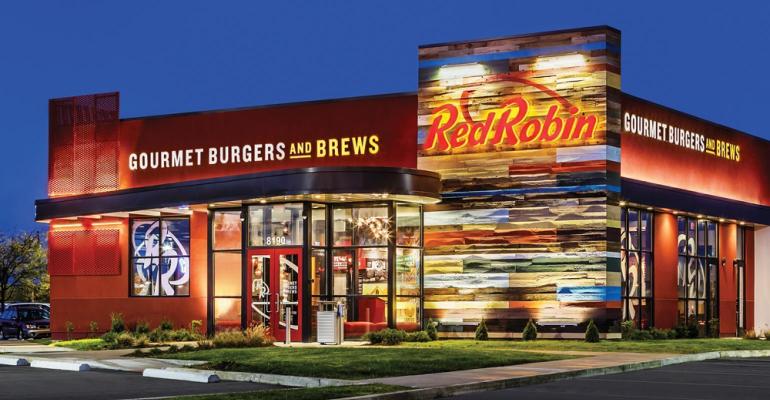 Red Robin launched the $10 Gourmet Meal Deal toward the end of the second quarter.
News>Casual Dining

The Englewood, Colo.-based casual-dining brand said it launched a $10 Gourmet Meal Deal in June and has been testing a Happy Hour, which will roll out in weeks, and lunch specials, said Paul J. B. Murphy III, Red Robin’s CEO and president.

“As the headlines have become increasingly negative, as it relates to consumer confidence, general inflation and the likelihood of a recession, casual-dining traffic has been trending downward,” Murphy told analysts on an earnings call for the quarter ended July 10. He added that while Red Robin’s sales were “disappointing” in the second quarter, they outperformed the casual-dining segment when compared with other brands.

“We attribute this outperformance to our high-low strategic approach to value, including higher priced, innovative, limited time offers and more compelling promotions, including our $10 Gourmet Meal Deal, which we launched in late June,” Murphy said. “These promotions are complemented by everyday value that include affordable prices, generous portions and signature ‘bottomless’ sides and drinks.”

Red Robin is also testing other value programs, Murphy added, “such as Happy Hour that will roll out to the majority of our system in a few weeks. We will also be testing lunch specials in the coming weeks.” Murphy said the lunch specials would be later in the fall.

Red Robin took a 2% price increase at the beginning of the third quarter, she said.

Murphy will continue as an adviser to the company after he hands over the president and CEO reigns to G.J. Hart, the former CEO of Torchy’s Tacos, on Sept. 6.

Hart has served as a member of Red Robin’s board since August 2019. Murphy said he expected the transition to be smooth, including the continued incorporation of Donatos into the Red Robin business.

“We've already been spending time together talking about the business, the impact that Donatos has been having on it, where we sit from a staffing perspective, taking a look at how we are going to manage the capital spend as we get into 2023,” Murphy said. “We do have a lot of levers that can move the business forward.”

Red Robin, founded in 1969, owns and franchises more than 520 casual-dining restaurants in the United States and Canada.