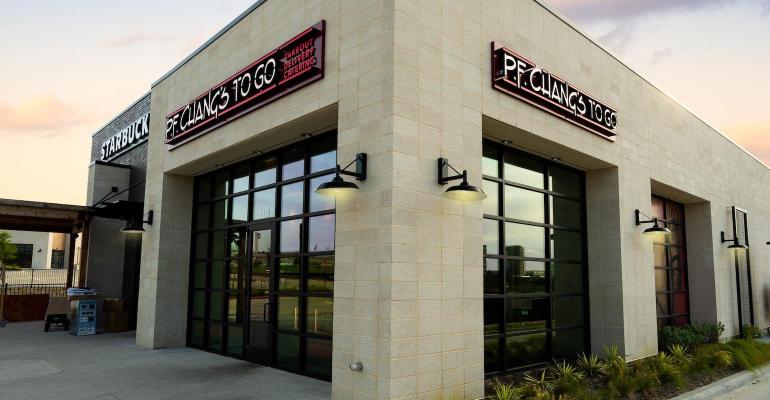 P.F. Chang's China Bistro Inc.
P.F. Chang's has been expanding its smaller To Go concept, with this opening in June in Irving, Texas.
News>Casual Dining

Brand declines comment; casual-dining chain was public from 1998-2012 and has been expanding its year-old To Go concept

P.F. Chang's China Bistro Inc is in talks with possible advisers for an initial public offering, sources have told the Bloomberg news agency.

The Scottsdale, Ariz.-based company, which has introduced a smaller P.F. Chang’s To Go concept over the past year, said in a statement Friday that it would “not comment on rumors or speculation.”

The company added: “As a company, we’re constantly looking for ways to strengthen our business in the most efficient and effective manner possible.”

P.F. Chang’s has traded on the public markets before. Chang’s went public in 1998 and was on the NASDAQ market for 14 years. Private-equity firm Centerbridge Partners LP took the company private in 2012 in a deal valued at about $1.1 billion and sold it to TriArtissan Capital Advisors in March 2019.

Unidentified sources told Bloomberg, for a report on the IPO talks Thursday, that the company could be valued at $1 billion or more. “Any listing could happen as soon as this year, the people said,” the agency reported.

However, the company in its Friday statement said, “Our strategy remains unchanged: P.F. Chang’s is an Asian restaurant concept founded on the mission of sharing made-from-scratch cuisine in an easily accessible way, whether in-restaurant or to go.”

P.F. Chang's is continuing to expand its smaller To Go concept, which it introduced last year, with a June opening in Irving, Texas, and another was planned for this month in Orlando, Fla.

The company opened the first smaller To Go restaurant in Chicago in February 2020 and said it expects to have more than 50 To Go units across the United States by the end of 2022. The company cited seven states for planned development: Arizona, Colorado, Florida, Louisiana, Nevada, New York and Texas.