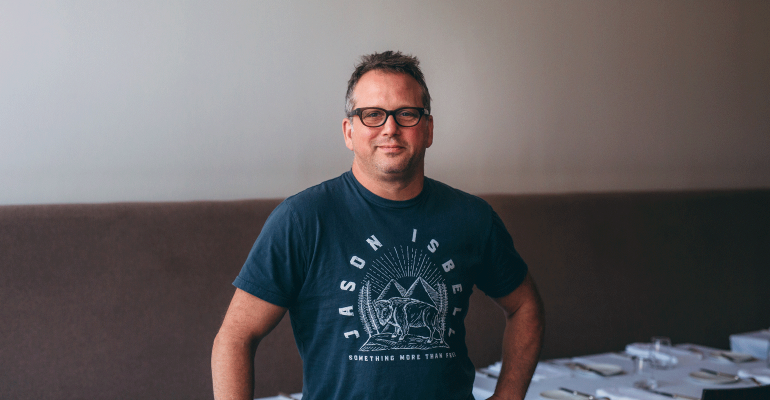 MenuMasters Innovator of the Year has a subtly trend-setting history

In 1997, when Paul Kahan and his partners opened Blackbird in Chicago, fine dining restaurants tended to serve complicated dishes in formal, hushed, and severe atmospheres. But Kahan’s instinct was to let loose a bit.

“We wanted to provide all the nuances that you would in a fine-dining environment — a really high level of service, but fun service,” the chef said. “We also said, ‘We want to play great music; we want people to really relax and have a lot of fun and not be uptight’.”

And Kahan had fun with the food, too. Perhaps the dish that has consistently received the most buzz is the birds nest endive salad. The leaves sit in a baked potato basket that’s crushed tableside with a satisfying crunch.

“I think people expect a certain level of whimsy, if you will. They want to be surprised; they want it to be fun,” Kahan said.

His unconventional fine-dining establishment helped start the casual fine-dining genre, so it was a bit of a surprise when Kahan and his restaurant group, One Off Hospitality, went on to open decidedly casual spots, like The Publican and Big Star.

It was a surprise to everyone but Kahan himself.

“I'm a pretty laid back guy, and truth be told I don't really enjoy the 4-hour meal,” he said. Kahan’s Publican restaurants, which includes Publican Quality Meats and Publican Quality Bread, are really more in-tune with the way Kahan himself eats, he said. He’s casual, but he takes food seriously.

“Seasonality, sustainability of course, the quality of the ingredients, the story behind the ingredients are really important building blocks in our success,” he said

Kahan works directly with farmers and has been doing so since long before it became the norm for chefs.

“The Publican specifically: That restaurant is so driven by our supply chain; we buy whole cows half at a time,” he said. To process them, Kahan has a butcher on staff, another culinary trend he was ahead on.

Having a butcher “affords us creative inspiration every day, and that's really something that you can't underestimate the value of,” he said. Once such example: The Publican’s pork rinds have developed a sort of cult following.

“We do a ton of experimentation with charcuterie, and we have so much fun with it, and it's such a great opportunity.”

Although Kahan’s impact on the restaurant world is notable, to him, his most significant achievement is giving back. He supports young chefs in formal and informal ways. His restaurants donate food to aid the homeless. He is a supporter of Alex’s Lemonade Stand Foundation for pediatric cancer research. He also co-founded Pilot Light, a program that brings chefs into Chicago public schools so they can connect food and cooking to common-core subjects.

“We do all kinds of programs, [and] we feel like we can go to sleep with a clean conscience at the end of the day because we're doing the right thing.”

Kahan is being honored this year along with other MenuMasters award winners at a celebration at the Drake Hotel in Chicago on May 18.