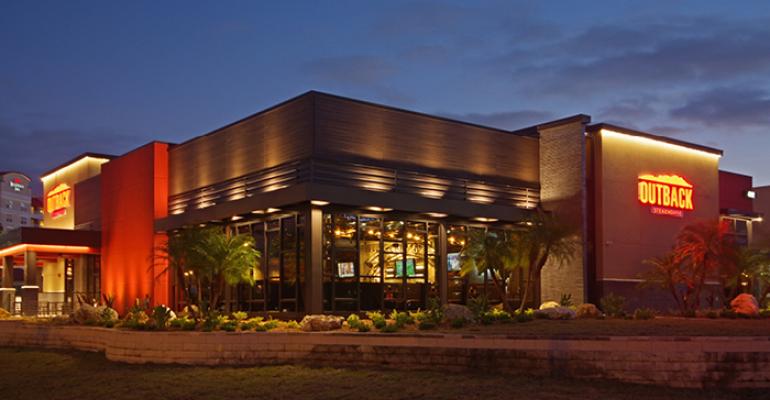 Waiter handhelds to be rolled out systemwide by year’s end and oven update in 2023, restaurant executives say on Q3 analyst call

Bloomin’ Brands Inc., parent to Outback Steakhouse and other casual-dining concepts, is updating technology in both the front and back of the house that it expects will improve service levels and food quality, executives said Friday.

“As part of this effort,” said David Deno, Bloomin’s CEO, on a third-quartering earnings call, “we continue to look for ways to simplify the business to improve execution and consistency.”

At Outback, the company is rolling out new kitchen grills and ovens to improve food quality and productivity, he said. The new ovens are in about 35% of restaurants, he said.

The third quarter was “among the highest inflationary quarters of the year,” Deno said, but the company “made the conscious decision to preserve our value equation and not raise prices to fully offset inflation.”

Deno said the restaurant brands were able to retain heightened levels of off-premises business during the quarter as well, especially through digital channels such as the website and smartphone app.

“In Q3,” he said, “approximately 77% of total U.S. off-premises sales were through digital channels.”

Marketing spend, has been reduced as a percentage of sales from pre-pandemic, has moved significantly to digital as well, Deno said, with the brands “deploying more targeted marketing to build awareness and drive frequency.”

“In the past year,” he said, “we implemented a new online-ordering system and mobile app to support our digital business. Both have outperformed expectations, and the new app has over 2 million downloads. You can expect to see more activity as we improve the functionality and features of our app and digital offerings.”

Deno said the company expected to accelerate new unit growth in 2023, emphasizing Outback, which has developed a smaller, less expensive prototype. Five have been built, executives said. A Fleming’s is scheduled to open in Fort Lauderdale, Fla., in December, Deno said.

Outback in Brazil is seeing a strong recovery from pandemic restrictions as well, he said. The company currently has 137 Outback restaurants in that South American country, and it expects to open 15 new restaurants next year, Deno said.

The company also expects to expand its Carrabba’s concept.

“Carrabba’s has been among our top performers in the company over the last three years,” Deno said. “They have built a terrific off-premises business that has opened up a number of possibilities for the brand.”

Should the economy start to experience a slowdown, Deno added, he expected value offerings would help the brands maintain sales.

“We've tried to make sure that we've taken price increases below inflation to maintain our value equation,” he said.

For the third quarter ended Sept. 25, Bloomin’ Brands reported net income of $32 million, or 34 cents a share, up from $3.5 million, or 3 cents a share, in the same period last year, which included an adjustment for Carrabba’s royalties. Revenues were up 4.5% to $1.056 billion from $1.010 billion in the prior-year quarter.