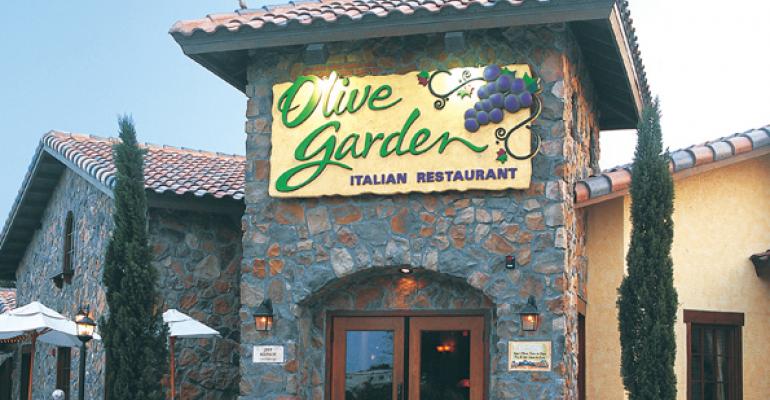 Chain to focus on value platforms like Cucina Mia

Olive Garden is moving away from deep discounting and instead relying on value platforms like Cucina Mia, executives with parent Darden Restaurant Inc. said Tuesday.

Cucina Mia, which debuted in February 2014, has been growing in usage, leaders of the Orlando, Fla.-based casual-dining operator said in a fourth-quarter earnings call. The platform lets guests mix and match six pastas and five sauces for a set price, and then add different proteins.

“The company added Cucina Mia to the menu with a $9.99 price point to offer everyday value to our guests,” Darden CEO Gene Lee said.

The menu has also been “gaining momentum” with several of Olive Garden’s typical customer demographics, he said.

“We are finding Millennials love Cucina Mia because they get to customize their meal. We also find the value-seekers like that entry price point,” Lee said. “Fifty percent of people who enter Cucina Mia at $9.99 do buy an add on.”

“The majority of the deep discounting we are referring to is the $9.99 promotional platform that we were running last year,” Lee explained. “We were running a lot of $9.99-$10.99, 11 to 13 weeks, in fiscal ’15. We refer to anything below $11.99 as deep discounting. We’re still going to have to have some value platforms across Olive Garden to drive the business.”

“‘Never Ending Pasta Bowl’ is not going away,” Lee said.

Additionally, the 846-unit chain has been helped by the economy, he noted.

“I do think the consumer is looking for less discounting activity than they were a year ago or two years ago,” Lee said.

While lower gas prices have not increased traffic, he noted, it has changed consumer behavior once they are in a restaurant, with more add-ons purchased, like appetizers, desserts and wine, and increasing check averages.

Lee also said Olive Garden is looking to offer delivery in the future.

“We think large-party delivery is a big growth outlet,” he said. “Over time, I expect, and the team expects, that 20 percent of Olive Garden’s total sales is going to migrate to take out. And we think that we are well suited to take advantage of that opportunity.”

Darden is working on technology improvements at Olive Garden and 480-unit LongHorn Steakhouse, executives said. Ziosk tabletop tablets have been rolled out to more than 100 Olive Garden units.

“Guest and server feedback has continued to be positive,” Lee said.

So-called “web-ahead” wait list capabilities have been tested in LongHorn units, and were expanded to an 11-unit Olive Garden test in the Orlando area in March.

“People are going to want to be able to put their name on some sort of list ahead of time,” Lee said. “They want to know what the wait is. It’s all building on the convenience trend.”

In addition to the web-ahead wait lists, some restaurants have screens in the lobby where customers can see where they are in the wait list, Lee said.

Darden is in the early phases of creating a loyalty program.