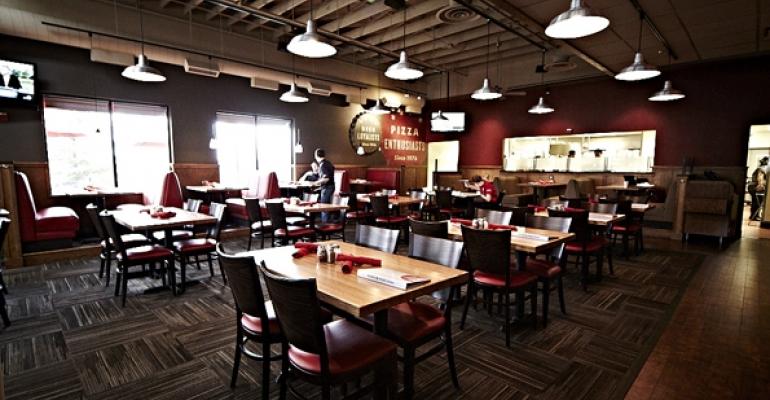 In an effort to attract a broader audience, Old Chicago is rebranding itself with a new restaurant design and menu — and a new name.

“We had a good blue collar mix, but we wanted to bring in more moms with kids to broaden our audience,” he said. “We felt we could attract new customers without alienating the old.”

Old Chicago partnered with Chicago-based Lettuce Entertain You Enterprises to upgrade the menu, which was rolled out to all units earlier this year. It includes 40 new items, such as salads, pastas, paninis and shareable appetizers.

The menu overhaul also includes a shift toward more in-house preparation, Mrlik said. And dishes have been reworked to be produced more efficiently in the remodeled units’ new kitchens.

Old Chicago has always been known for beer, but the new menu focuses more on craft beers, according to Mrlik. Tap options have increased from 30 to 36, with a strong emphasis on craft beers from local and regional breweries. Another 49 bottled beers are available, including local, domestic and imported brands.

Mrlik said bar employees must undergo beer training to better understand the brews and their appeal to the local market.

Over the past year or so, Old Chicago has tested aspects of a new prototype design in three restaurants in Eden Prairie, Minn., and Loveland and Colorado Springs, Colo. The remodeled units showed sales increases of 10–16 percent, Mrlik said.

The company is investing about $8 million to $10 million in remodeling and moving forward with remodeling remaining company-owned locations, which are expected to be complete by the end of September. Of 58 company-owned units, 28 have been remodeled to date.

Once the company can demonstrate a solid return, Mrlik said it will develop a plan for franchisees to incorporate the design changes. The Old Chicago chain includes 36 franchise locations.