/sites/all/themes/penton_subtheme_nrn/images/logos/footer.png
Recent
Recent
Chicago restaurant trailblazer Rohini Dey discusses the power of food to make change
Sep 29, 2022
How Starbucks is handling unions under new control
Sep 29, 2022
An inside look at CREATE: The Future of Foodservice
Sep 28, 2022
Subway offers ‘Souped Up’ weekend deals
Sep 28, 2022
Starbucks and its union are finally ready to negotiate
Sep 28, 2022
Featured
Menu Tracker: New items from Chipotle, Schlotzsky’s and Shake Shack
Sep 16, 2022
How marijuana themed sandwich chain Cheba Hut creates a vibe embraced by all
Aug 25, 2022
Mike Rypka, founder and CEO of Torchy’s Tacos, on the chain’s brand, which is just a little bit ‘trashy’
Sep 07, 2022
How a viral country song and broad-based campaigns boosted Applebee’s and IHOP
Sep 12, 2022
Menu Tracker
brought to you by
News>Casual Dining 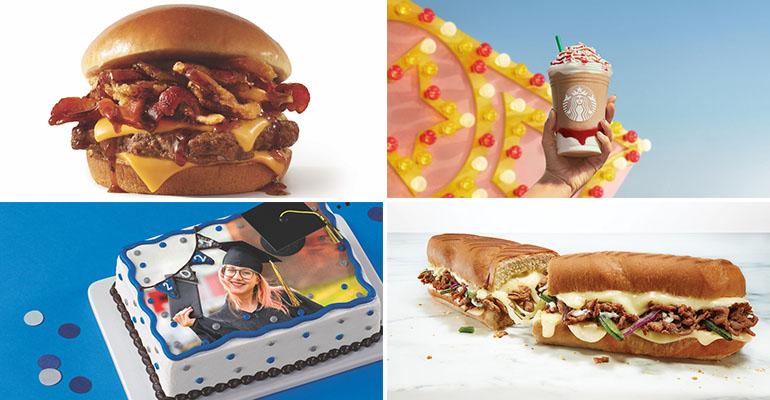 You can now add melted cheese to any Subway footlong for $1. This reportedly has created some operational issues, but if they can be resolved, then it’s a permanent new option.

So is Wendy’s new Bourbon Bacon Cheeseburger, or, as a spokesperson said, it will be available “as long as fans are craving it.”

Norm’s is celebrating the approach of summer with some rib options, and Starbucks is doing it with a funnel cake Frappuccino.

Rubio’s Coastal Grill has teamed up with celebrity chef Richard Blais for some creative new tacos and Velvet Taco, as always, has a Weekly Taco Feature, this week with jerk-seasoned shrimp.

IKEA Restaurant is making its Menu Tracker debut with a pulled pork sandwich, Tacodeli is debuting its first salad limited-time offer, Jet’s Pizza has a pizza based on a sandwich and BurgerFi has a cookie-themed milkshake.

Zaxby’s has brought back fried pickles, and Voodoo Doughnut has a new sweet-and-spicy Cannolo flavor.