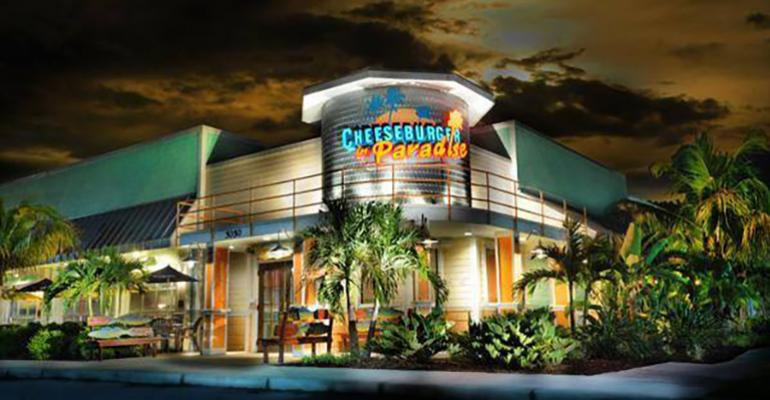 Facebook
Cheeseburger in Paradise at one time had 38 restaurants.
News>Casual Dining

Parent Luby’s Inc., which also owns Fuddruckers, is in the process of liquidating assets

The last Cheeseburger in Paradise restaurant has closed permanently in Secaucus, N.J., as parent Luby’s Inc. continues with its planned liquidation process.

In 2012, when Luby’s acquired Cheeseburger in Paradise, the casual-dining brand had 23 units. The last New Jersey unit had suspended operations in March when the COVID-19 pandemic was declared, according to a local report.

Houston-based Luby’s board earlier this month gave the go-ahead to a plan for liquidating the company’s assets, pending shareholder approval. The company estimated the sale of assets could generate between $92 million and $123 million.

Cheeseburger in Paradise, an island-theme, casual-dining restaurant, was developed in partnership with musician Jimmy Buffett and OSI Restaurant Partners LLC, now Bloomin’ Brands Inc., in 2002 and was named after one of Buffett’s most popular songs. In September 2009, OSI sold Cheeseburger in Paradise to an investor group led by chain president Steve Overholt.

At its height in 2006, the Cheeseburger in Paradise brand had 38 units in 17 states.

“Cheeseburger in Paradise will nicely complement our core family-friendly brands, Luby’s Cafeterias and Fuddruckers, with a casual-dining restaurant and bar offering,” said Chris Pappas, Luby’s CEO, in a statement at the time of the 2012 purchase. “A number of their 23 locations are located in high-traffic areas, many near successful malls and tourist attractions.”

A Luby's spokesperson said Wednesday that the subsidiary that controls the Cheeeseburger in Paradise brand and trade dress "may be included" as the company looks toward liquidations.

For the third quarter ended June 3, Luby’s reported it owned 79 cafeterias, 44 Fuddruckers and the one Cheeseburger in Paradise. The company also franchises about 90 Fuddrucker units and its culinary contract services division manages foodservice at 28 healthcare, corporate dining and stadium sites.

UPDATE Sept. 30, 2020: This story has been edited to include a comment from Luby's spokesperson.