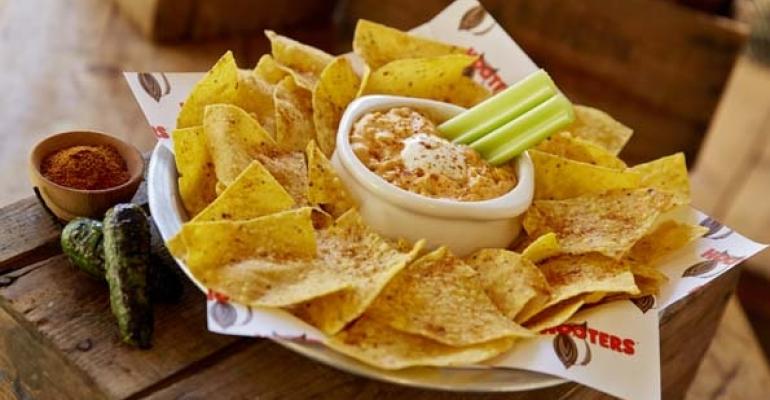 Hooters is playing to its strengths this season as it offers March Madness specials based on its signature Buffalo wings, as well as working to elevate its food quality by bringing more preparation in-house.

Hooters has introduced a Buffalo Chicken Dip for the season, a shareable item of chicken with spicy Buffalo sauce mixed with spiced cream cheese and topped with a choice of blue cheese or ranch dressing, served with spiced tortilla chips.

Another shareable option is the chain’s new Southwestern Spring Rolls, with chicken, black beans, corn and peppers served with an avocado ranch aïoli.

To accommodate customers observing Lent, Hooters has added a blackened Mahi Sandwich, pan-seared to order and served with an herb rémoulade, lettuce and tomato on a brioche bun. The sandwich was first tested as a limited-time offer last summer. Brickman said he thought it made sense to offer something lighter for game watchers.

“Mahi’s a great fish and we thought it would be a great match for [March Madness] as well — something that’s very clean, doesn’t have a lot of ingredients, that you can enjoy with the game and not feel like you’re going to pop afterwards,” he said.

All of the items are available through April 20.

Brickman said he is using the occasion of the popular college basketball tournament to test foods meant to be eaten communally, something he plans to keep working on over the course of the year.

“So we’re looking at nachos and different dips and other shareables,” he said.

Hooters doesn’t currently offer nachos, but Brickman said he is testing Tex-Mex nachos made with chili, cheese, pico de gallo, guacamole and sour cream in some markets. That test would be followed by Buffalo chicken nachos, using the current limited-time dip, but with more chicken and topped with crumbled blue cheese, diced tomatoes, sliced celery, cheese sauce and tortilla chips. After that, he plans to test pulled pork nachos with pico de gallo, avocado chipotle cream, cheese, jalapeño peppers and a drizzle of barbecue sauce.

“We can control it at that point, and we think it shows a higher state of quality, bringing something from freezer to fryer, or freezer to line,” he said.

Another benefit is that chefs take more pride in their work.

In the short term, training and errors can negatively affect food cost as new systems are implemented, Brickman added, but he expects a financial benefit in the future, not only from reduced food costs, but also by being able to reduce the size of freezers in future units.

“In the long term it will shrink the cost,” he said.