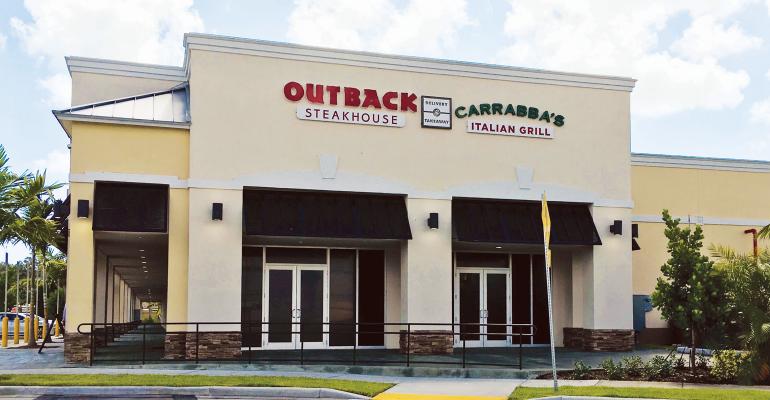 This fall, Bloomin’ Brands Inc. tried a new tactic in its effort to win over customers who want to eat their restaurants’ food at home: It opened a takeout-only location in Hollywood, Fla., co-branded as both Outback Steakhouse and Carrabba’s Italian Grill.

The restaurant was the first of what could be several “express” locations that the Tampa, Fla.-based casual-dining operator plans to open this year and next, executives said during a third-quarter earnings call on Friday.

Bloomin’ Brands plans to open another three to four such locations over the next two months in areas it expects will support more delivery, CEO Liz Smith said. The company will use what it learns from the express units to guide its off-premise strategy.

“Off-premise represents a significant and incremental structural tailwind for the industry,” said Smith, who said takeout and delivery orders could reach 25 percent of total sales.

Rapid growth in off-premise orders at casual-dining chains has pushed many in this direction. This year, Minneapolis-based Buffalo Wild Wings Inc. closed locations it franchised for PizzaRev, the fast-casual pizza concept it has since sold, and reopened two of them as fast-casual versions of its flagship chicken wing chain.

To be sure, casual-dining chains have been developing express units for years, mostly for airports and universities where waitstaff-centric concepts don’t typically work.

But concepts are evolving as the takeout business at casual-dining chains soars and dine-in traffic struggles. According to the MillerPulse index, casual-dining traffic has been down for all but four months dating back to at least 2012.

At the casual-dining chain Olive Garden, to-go orders increased 12 percent in the company’s most recent quarter, and have now risen 70 percent over the past four years.

Even operators that don’t concentrate on takeout are seeing growth.

“We have seen a consistent uptick in to-go sales for some years now with us,” Texas Roadhouse Inc. president Scott Colosi said last week.

The chain is rolling out a mobile app at its more than 500 locations.

This summer, the chain opened “B-Dubs Express,” with a more limited menu to focus on takeout and delivery customers. The company expects half of orders at the locations to be takeout and half to be dine-in.

Bloomin’ Brands’ strategy is more unique because the express unit is co-branded with two of its chains, Outback and Carrabba’s. The company did not discuss the strategy in detail, but Smith’s stated goal of 25-percent takeout sales was a clear indication of her views on off-premise dining at casual-dining chains.

Bloomin’ Brands is expanding its delivery service, which it plans to operate itself rather than with a third party. The company offers delivery in 246 locations around the country. It plans to use the smaller co-branded footprint model to expand in new and existing trade areas where takeout has the most potential.

“We see the growing off-premise as a big opportunity for us,” Smith said.