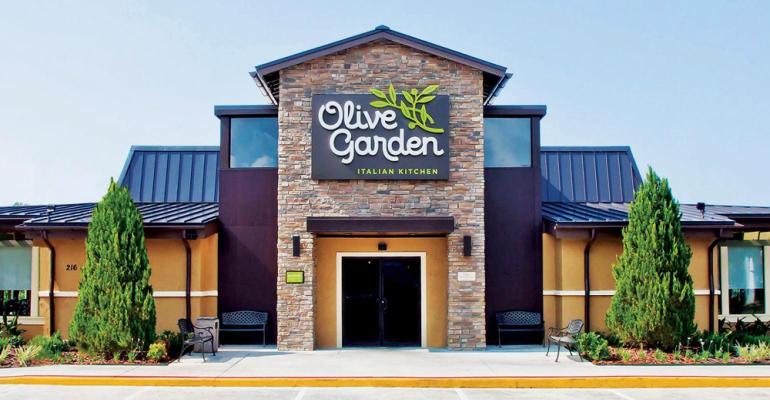 Darden Restaurants Inc., parent to Olive Garden, LongHorn Steakhouse and other casual-dining brands, saw inflation pressure some guests, especially those in the under-$50,000-annual-household-income category, in the quarter ended Aug. 28, but its fine-dining concepts continued to draw customers.

Rick Cardenas, Darden’s CEO and president, said Thursday on a first-quarter earnings call that customers in households making less than $50,000 a year were showing some reduction in usage, but that decline was not being seen as much at higher-income brands like Yard House and Seasons 52.

“Olive Garden and Cheddar's [Scratch Kitchen] have more direct exposure to these guests,” Cardenas told analysts. “Looking at guest behavior across our entire portfolio, we are seeing softness with these consumers while, conversely, we are seeing strength with guests and higher-income households even in this environment.”

In the first quarter, same-store sales were up 4.2% for all of Darden’s brands with increases of 2.3% at Olive Garden, 4.2% at LongHorn Steakhouse, 7.6% in the fine-dining division and 7.6% at the other businesses.

Cardenas added that “We don't want to change what we do just to capture a segment of the of the population. We want to continue to focus on what we've been doing, especially at Olive Garden.”

He added that the company would like to add one more visit from loyal guests. “Our loyal guests span a lot of income levels,” Cardenas said. “Anything we do is going to help drive more loyalty from our existing guests, whether they are at or below $50,000 or above $50,000.”

Cardenas noted that $50,000-income consumers make up a portion of Olive Garden customer base, “but it's not a majority. So a majority of our consumers still are above that and that consumer, especially above $100,000, is doing very well.”

Cardenas said the Darden brands were “committed to our strategy to be priced below” competitors.

Raj Vennam, Darden’s chief financial officer, said the Darden brands a took price increase of 6.5% in the first quarter to offset higher commodity and other costs. Total inflation was about 9.5% in the quarter, he added.

“That compares to full-service CPI [consumer price index] of 9%,” he said, adding that Darden’s price increases on a two-year basis were about 14%. “We may not be seeing what some others might be seeing because we haven't taken the levels of pricing that the industry in general has taken,” Vennam said.

“As we look to the second quarter,” he explained, “we expect margins to decline less than they did in the first quarter and then grow versus last year in the back half.”

Cardenas said Darden continued to invest in its digital platforms, which contribute to to-go sales. In the quarter ended in August, to-go sales accounted for 24% of total sales at Olive Garden, 14% at LongHorn Steakhouse and 13% at Cheddar’s, he said.

“Our technology investments have created an infrastructure that reduces friction for our guests and our operators,” he said.

“The off-premises experience is a lot better across a lot of places, so people have other ways to get their food from casual dining than they did before” the pandemic, which was declared in March 2020, Cardenas said.

“While a lot of people think COVID is over,” he added, “there's some that don't.” A lot of restaurant closures during the pandemic were among independents in urban markets, and so some of the suburban markets are still doing well, he said.

For example, he said LongHorn traffic is above pre-COVID levels, but other brands still have dining capacity.

“We're seeing the ability as we take price in some of the fine-dining brands, Cardenas said. “There's really no pushback, so we think that that that is a broad-based benefit for us because we have a portfolio of brands that kind of run the spectrum of the consumer. When one segment of the population isn't doing as well, the other segment is still OK.”

Staffing has become less of a challenge in the industry than it was in the past two years, Cardenas added. “During the quarter, we successfully staffed nine new restaurants, and we remain on track to open 55 to 60 new restaurants this fiscal year,” he said.