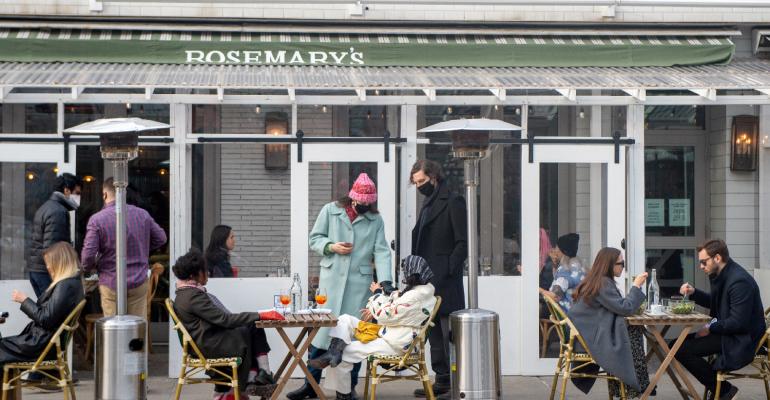 Restaurant customers are increasingly reverting to off-premises channels and avoiding dine-in experiences as their frustrations mount with staffing, supply and general pandemic concerns, according to recent research firm data.

“The consumer experience has been eroding,” said Lisa Miller of Dallas-based Lisa W. Miller & Associates LLC, who has been tracking consumer sentiment since the COVIC-19 pandemic was declared in March 2020.

Miller said her nationwide survey of 1,000 consumers in the week ended Oct. 18 found frustrations with restaurants short of staffed because of labor challenges and out of items because of the supply-chain bottlenecks.

“A lot of consumers are basically just saying, ‘I'm going to move it back to take out and just eat at home,’” Miller said.

New data Thursday from analytics firm Black Box Intelligence found October same-store sales were up 6% but same-store traffic was down 6.4%.

‘Traffic continues to be a concern,” Black Box noted in its report. The 6.4% traffic decline was down 0.2 percentage points from September.

“October was the worst month for the industry for traffic growth since the 9.4% reported in March, when vaccines were still early in their rollout and consumers were significantly more cautious,” Dallas-based Black Box said.

Miller’s “Journey Back to Joy” survey found 36% of consumers nationwide were doing more takeout, curbside and delivery at restaurants, with regional differences ranging from 54% in New England to 27% in the Mountain states.

“They're not very joyful to sit in a restaurant right now,” said Miller, who began tracking that sentiment in February.

“The amount of consumers frustrated with the short staff has nearly doubled since February,” she said. “The honeymoon is over.”

Miller advised restaurant operators to try three things to mitigate those frustrations, including supporting employees in their interactions with customers.

“First and foremost, operators need to have their employees’ back,” Miller said, citing recent incidents such as the customer who threw soup at an employee at a restaurant in Temple, Texas.

“Consumers are now part of the labor shortage problem, because the employees are basically saying life's too short to put up with this,” Miller said.

Operators should also reduce seating capacity if their dining rooms lack the staff to cover it, Miller said.

“Consumers would much rather have to wait for their experience and then have a really good experience,” she said.

“People want that joyful experience,” she said, “That first impression is important.  Make the environment a little bit more festive — from decorations and those different things, those little subtleties, that can actually make a difference and make people feel more joyful.”

While some countries in Europe or renewing COVID restrictions amid virus surges, such as The Netherlands on Friday considering a partial lockdown that would require bars and restaurants to close in the evenings, U.S. consumers “are on the cusp of getting back to joy,” Miller said.

“The consumer sentiment is really turning positive,” Miller noted. “You have to remind your customers why they fell in love with your brand in the first place.”

Part of that is reassuring customers, especially those who are anxious or uneasy about dining out, that cleanliness and other sanitation protocols remain in place as establishments continue into the vaccine era, she said.

In addition, Miller said customers even in colder climates show a willingness to dine in the relative safety of outdoor areas.

“Operator should make sure they leverage that if they can make people somewhat comfortable with heaters and such,” she said.

Miller’s October research found that 51% of consumers in New England and 42% in the Middle Atlantic states said they would “rather still sit outside at a restaurant to feel safer even as temperatures get colder.” That percentage fell to 32% in the West North Central region.

“That's an opportunity for people to get back out there and start to enjoy dining out and feel safe,” Miller said.