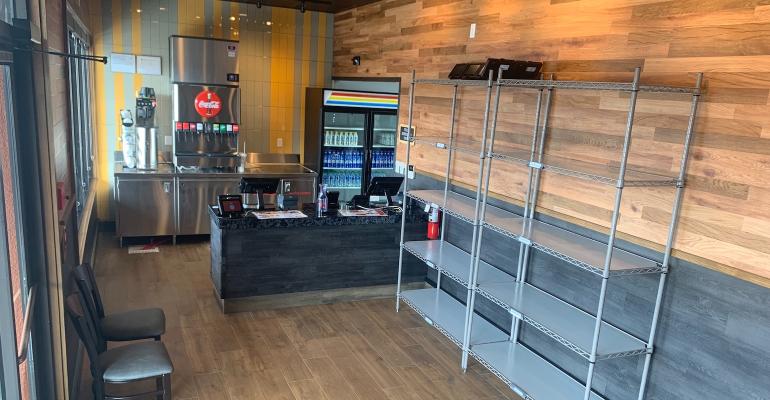 Dallas-based Brinker said the new unit, reported in August when it was under construction, will open near Southern Methodist University, reduced to 1,600 square feet from the brand’s traditional 5,500-square-foot building. A spokesperson said the so-called Delco unit provides “the opportunity for Chili’s to break into locales too small” for traditional restaurants and “opens a large addressable market by thinking differently — with off-premises being a third of Chili’s sales.” The location will employ 20 workers, the spokesperson said.

Earlier in the day, Brinker released earnings for the first quarter ended Sept. 28, with executives saying they were working to simplify operations and overhaul menu offerings, such as providing more cost-effective versions of Chili’s value-oriented “3 for Me” offering.

Since taking the helm five months ago, Kevin Hochman, Brinker CEO and president, said the company had identified four areas to focus on, including atmosphere, food, hospitality and team-member experience.

A new menu introduction on Oct. 25 allowed Chili’s to introduce the restructured “3 for Me” platform, which still starts at $10.99, Hochman said.

“We reduced the menu mix of that platform,” Hochman explained. “We reduced from 12 offers to nine, and we also went from four price tiers to three price tiers. The intent of that was to drive more trade up within ‘3 for Me’ as well as higher guest check.” Hochman earlier had noted that he wanted to reduce the number of discounted tickets and items provided through the rewards program.

“We've seen significant average check increases for those that buy ‘3 for Me,’” Hochman said. “We've also seen the reduction of mix in ‘3 for Me,’ as some [customers] have moved out back to the a la carte to find the items that were removed.”

What Hochman called “destination items,” such as Cajun chicken pasta, chicken fajitas and the Margarita grilled chicken, were repositioned out of the bundle and onto the a la carte menu. “That has also helped us get out of some of those discounted checks,” he noted.

Those small moves have also helped the per person check average for the overall restaurant, he added.

Joe Taylor, Brinker’s chief financial officer, “We're one week into it but obviously pretty excited about what we're seeing come out of it. We'll watch it develop it as we go through the rest of the quarter, but it's performing across all of the metrics, including the mix back into the a la cart side of equation.”

The primary driver of the operating loss in the first quarter was “the significant increase in food and beverage costs, due mainly to chicken and beef pricing,” the company said.

Combined same-store sales for the quarter were up 5.3%, with increases of 3.8% at Chili’s and 18.2% at Maggiano’s Little Italy.

Brinker International, founded in 1975, has 1,645 restaurants, including 1,592 Chili’s and 53 Maggiano’s. It also owns the It's Just Wings and Maggiano's Italian Classics virtual brands.