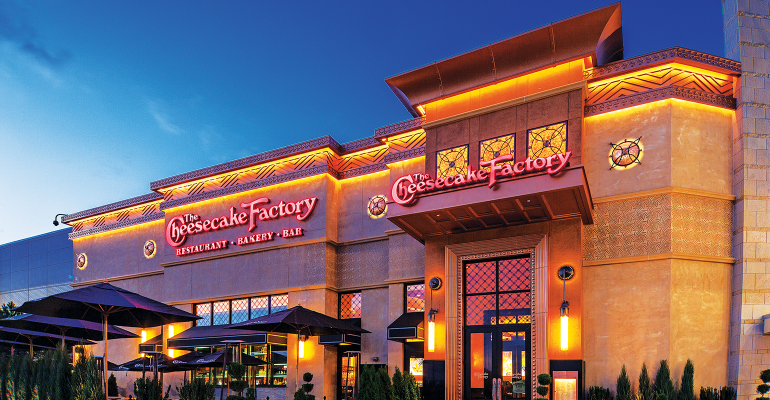 While the 40-year-old Calabasas Hills, Calif.-based Cheesecake Factory has developed the Social Monk concept in-house over the past two years, the casual-dining company is realizing the first of its 2016 minority investments in casual-dining North Italia and fast-casual Flower Child, two brands created by Phoenix, Ariz.-based Fox Restaurant Concepts.

Social Monk’s culinary operations were led by Mohan Ismail, RockSugar’s Singapore-raised chef, and its guests will order at the counter and be served at their tables. The concept is in the Promenade at Westlake in Thousand Oaks.

As Cheesecake Factory prepares for the North Italia acquisition and opens Social Monk, the company is evaluating its 14-unit Grand Lux Café and two-unit RockSugar Southeast Asian Kitchen and has no immediate plans to expand either brand.

Matthew Clark, The Cheesecake Factory’s chief financial officer, told analysts on a post-fourth-quarter earnings call that the company was evaluating financing alternatives for the estimated $150 million to acquire the remaining interest in North Italia. That deal is expected to be completed at the end of the third quarter, he said.

North Italia has 15 units, and Clark said the Italian-focused brand could have 22 or 23 units open by the end of the year. Current locations are in Arizona, California, Colorado, Kansas, Nevada, Pennsylvania and Texas. Cheesecake Factory has until 2021 to exercise its option on Flower Child, he said.

Clark told analysts that Cheesecake Factory has invested between $40 million and $45 million in North Italia so far and the company’s capital allocation for both that and Flower Child this year is forecast at between $20 million and $25 million.

An average North Italia generates more than $7 million in sales, Clark said, which equates to about $1,200 per square foot, and the four-wall cash flow margin is between 18% to 20%. Average units cost range between $3 million and $3.5 million. That compares to average unit volumes at Cheesecake Factory of about $10.7 million, he said.

“North continues to have a strong pipeline, which we believe will support a sustained 20%-plus unit growth annually going forward, which will translate to pre-opening costs of about 2% to 2.5% of North’s sales,” Clark said.

He added that because of labor pressures, the company anticipates taking price increases of about 3% this year, “which is pretty close to where we ended 2018.” Higher-cost wage market, like California, may see bigger price increases, Clark noted.

Cheesecake Factory president David Gordon said the brand saw about 15% of its sales in off-premise orders, which include online order and store pickup, in the fourth quarter.

“It’s pretty broad across geographies,” Gordon said. “Some of the geographies that started stronger that were in our base originally in Northern California and some of those are a little more tech-savvy have continued to stay very strong. But even some of the newer markets, we see really good sustained growth. And we don’t see any reason why that won’t continue.”

While positive on the off-premise growth, Andy Barish, an analyst with Jefferies, said in a note Thursday that there is “worry to some extent about negative dine-in traffic.”

Clark said delivery was about 60% incremental business. “We’ve seen some of that lunch business grow and we think that some of that is the delivery business,” he said, “So we feel good about the positive incrementality.”

The company also has 21 licensed Cheesecake Factory restaurants abroad. Gordon said the company anticipates as many as five international openings next year, including two in the Middle East and Latin American and one in Asia.