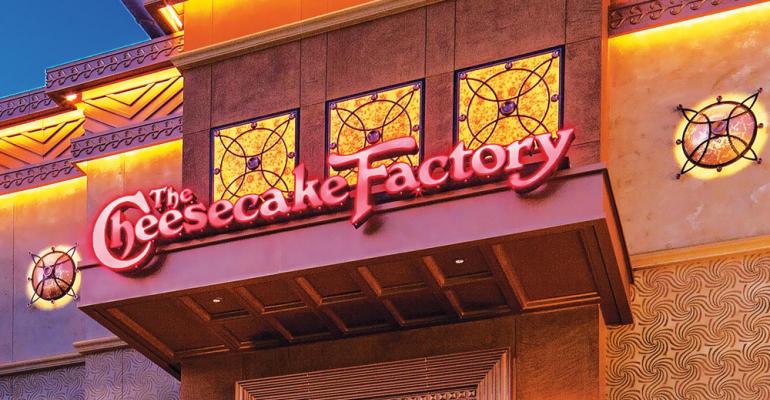 Pricing may rise about 5% by end of year, but commodity inflation expected to ease

Menu prices at The Cheesecake Factory will increase 3.25% this month with the rollout of a new menu, the casual-dining chain said Wednesday during its fourth-quarter earnings report.

The move will bring the chain’s year-over-year menu pricing increase total to 4.75%, and more menu price increases are expected in 2022 as the company looks to protect restaurant margins from growing inflation and labor costs, said David Overton, parent company The Cheesecake Factory Inc.’s chair and CEO.

The company is also considering a second menu price increase in the third quarter of about 2%, if inflation continues as expected, but the plan is to remain flexible, given commodity challenges seem to be stabilizing.

Matthew Clark, the company’s chief financial officer and executive vice president, said the company is expecting inflationary pressures to lessen to low-double-digits for the year, starting with mid-teens in the first quarter and ending with mid-to-high single-digit increases in the fourth quarter of fiscal 2022.

Labor pressures continue to be “dynamic with a lot of moving parts,” Clark said, but the company is expecting labor inflation of about 5% when factoring wage increases, channel mix and other things.

Menu price increases cannot offset those costs entirely, and Clark said the chain is still pricing “below grocery and our competitive set.” But he remains confident there is room for higher pricing ahead.

“Historically, the ability for Cheesecake to take pricing has been very strong [with] the varied menu, anything from $7.95 to $30, and the ability for guests to share,” he said. “In 16 years here, through a lot of different cycles, I’ve never seen us not get the pricing that we’re going after.”

The Calabasas Hills, Calif.-based casual dining brand took a hit during the last two weeks of the Dec. 28-ended fourth quarter, when the Omicron variant kept diners at home.

But COVID-related indoor-dining restrictions have been lifted for nearly all of the company’s restaurants, and sales trends for the first quarter of 2022 have been strong, Overton said. First quarter comparable sales through Feb. 15 were up 24.3% — and up 38% for the North Italia brand specifically.

David Gordon, The Cheesecake Factory’s president, said staffing challenges are no longer inhibiting sales, though Omicron did cause labor pressures for a few weeks during the surge. But “not to the point that we had to really had to make any adjustments to our hours or close for any particular daypart — maybe a restaurant here or there had opened or closed an hour early on a particular day, but nothing that was systemic,” he said.

In January, hiring increased 10% to 15% from the fourth-quarter average, he noted, and if that trend continues the casual-dining brand will be “sitting in a really strong place,” Gordon said.

Even with the return of guests to restaurants as fear of Omicron lifts, Clark said the company’s off-premises sales have remained “sticky,” accounting for 27% of sales during the fourth quarter.

The company launched a newly refreshed website in early February designed to offer a better online experience and drive traffic. The company is also planning to launch a new rewards program pilot later this year.

Overton said the company hopes to accelerate unit growth in 2022, projecting 17 to 19 new openings, mostly in the second half of the year, including as many as five Cheesecake Factory units, five to seven North Italia locations, and as many as seven other Fox Restaurant Concept restaurants, including three to four Flower Childs.

The Cheesecake Factory Inc. owns and operates 306 restaurants in the U.S. and Canada under the Cheesecake Factory and North Italia brands, and a collection within the Fox Restaurant Concepts acquired in 2019. Internationally, 29 units operate under licensing agreements, and the bakery division has two U.S. facilities that produce the chain’s renowned cheesecakes and other baked products.

CORRECTION: This article was updated to correct financial results.