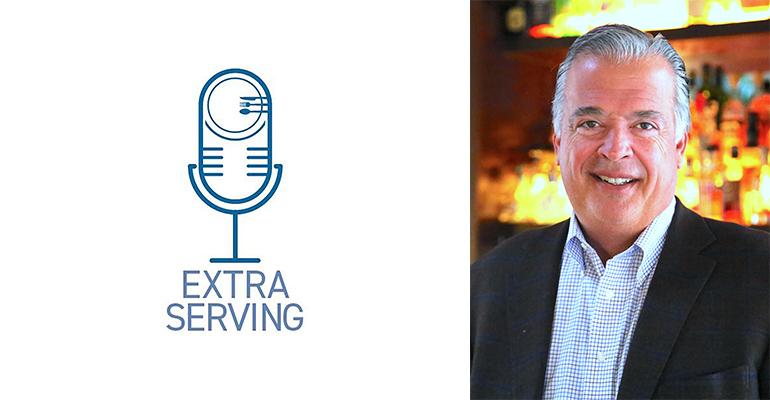 The Columbus, Ohio-based restaurant group founder and CEO talks about passing the baton in his restaurant group and how he’s focused on strategy and stewardship in this Extra Serving podcast

After nearly 40 years deep in the hurly-burly of the restaurant business, Cameron Mitchell says he’s looking to pass the baton within his 36-unit company and focus on what he calls the two esses: strategy and stewardship.

“I’m getting old. I tell people my ‘low-fuel light’ is on,” the 57-year-old founder and CEO of Columbus, Ohio-based Cameron Mitchell Restaurants said with a laugh. “I use the term: ‘I’m in the fourth quarter of my career.’”

During a conversation at the debut of a $2 million renovation of the Dallas Ocean Prime restaurant, Mitchell reflected on this dish room-to-boardroom story.

Mitchell said he is looking to move into more of a strategy-focused chairman’s role at his company, which owns the 16-unite Ocean Prime polished casual concept as well as others, and to focus on the strategy and stewardship.

Stewardship is not just for his company, he added, “but it’s also about our industry and our community.”

To that end, Mitchell, who attended the Culinary Institute of America and served in its leadership for years, said he has been working with seven younger restaurateurs in the Columbus area who meet every other month to share experiences and challenges.

And in August, he helped unveil the $40 million Mitchell Hall at Columbus State University in his headquarters city. The 80,000-square-foot expansion to the schools’ existing culinary program includes two restaurants and a lecture theater.

“It’s another pathway to get a great culinary education,” Mitchell said.

Mitchell, who last year published his “Yes Is the Answer: What Is the Question?” book, in the accompanying Extra Serving podcast talks about when and how he decides to refurbish older restaurants.