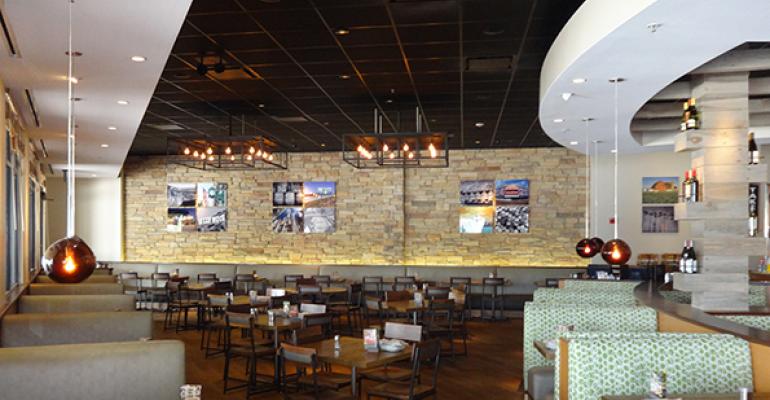 California Pizza Kitchen Inc. is accelerating its remodeling plan with the goal of refreshing half of its 192 company-owned U.S. locations by the end of 2015.

G.J. Hart, CEO of the Los Angeles-based operator, was in Chicago this week during the NRA Show to highlight the updated restaurants there. Chicago will be the first market in which all six area restaurants will be remodeled by this summer, allowing the chain to kick off a more comprehensive marketing program to draw attention to what CPK is calling its “Next Chapter.”

In 2011, the 30-year-old chain was acquired by private-equity firm Golden Gate Capital for $470 million. The following year, the company began testing a new prototype featuring a complete redesign, in Sunrise, Fla., at the Sawgrass Mills mall.

Currently in more than 20 restaurants, the new look brought a fresh, contemporary design to CPK, with sustainable materials, open kitchens and freshness cues like an herb wall.

Hand-tossing pizza in front of guests provides theater as a focal point, and remodeled restaurants renew emphasis on the bar, with dedicated seating and a beverage menu that includes more wine and craft beer, sangrias and innovative cocktails.

Hart said sales have increased in the high-single digits at restaurants that have completed the remodel, without any marketing.

As a result, the company is ready to ramp up the transformation systemwide. By the end of the year, 80 restaurants will be remodeled, with the focus on completing updates at units in major metro areas like Chicago, including Los Angeles, New York, Miami and the District of Columbia.

New restaurants will also sport the new look. CPK plans to open three or four units in 2015, with another six locations to open in the U.S. next year.

The “Next Chapter” transformation has included an overhaul of the menu, including an upgrade of existing ingredients and a broader menu focus.

CPK has streamlined the menu to around 72 items, compared with more than 100 previously.

Pizzas, pastas and salads are still signature platforms, but offerings now include a broader range of price points, from small plates and flatbreads in the $4 to $8 range, to premium items like a rib-eye steak, priced at $25, or cedar-plank roasted halibut, priced at $24.

A changing lineup of seasonal items has been added, as well as more reduced-calorie options and dishes for guests with a range of dietary restrictions.

At lunch, the chain now offers various “duos,” like a 7-inch pizza or half a sandwich paired with soup or salad, priced at around $11 or less.

CPK has long been known for its signature BBQ Chicken Pizza, but pizza sales represent only about 28 percent of the mix — lower than in past years — and the broader menu aims to eliminate the veto vote, Hart said.

The refresh has lifted bar sales from about 5 percent to 9 percent systemwide so far, a number that is likely to grow as more restaurants adopt the “Next Chapter” updates, Hart said.

The company is also testing an app that will offer mobile ordering and pay-ahead options, Hart said. And it is growing delivery sales, both with in-house drivers and third-party providers, depending on the market.

Additionally, CPK is accelerating international growth. With about 79 units in 15 countries, CPK expects franchisees to open 14 units outside the U.S., and another 20 locations in 2016.

This year, the brand entered Chile for the first time. CPK is looking for growth in Canada, Colombia, Panama, Costa Rica, Thailand and Vietnam, Hart said.

CPK’s brand partnership with Nestlé, which manufactures its frozen pizza grocery products, is also growing with an expanded line that includes hand-tossed pizza with a thicker crust and gluten-free options.

Hart said the chain’s same-store sales have been positive, although he declined to specify numbers, and the brand is on the upswing. Sales in fiscal 2014 topped $650 million, he said, including royalties from franchised locations.

According to Nation’s Restaurant News Top 200 research, CPK’s domestic systemwide sales for fiscal 2014 were estimated to be $634 million, a 2.2-percent decrease from the preceding year. The chain ended fiscal 2014 with 192 company-owned and 17 franchised U.S. locations.

With the redesign reaching a greater number of restaurants this year, Hart said he was optimistic that sales trends will remain strong.

“What Golden Gate has allowed us to do is work on the fundamental aspects of the business — the people, the culture,” he said. “The next step is getting those lapsed users back.”