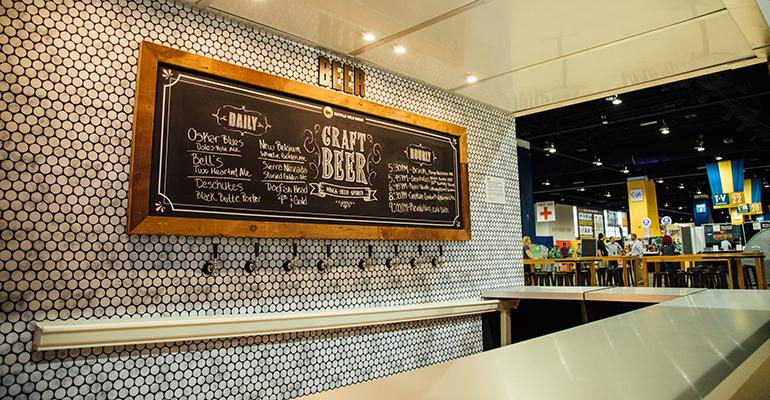 Buffalo Wild Wings to craft beer fans: You can ‘geek out’ at our bars

Buffalo Wild Wings took its famed sports bar on the road as a title sponsor at the Great American Beer Festival (GABF), held mid-September in Denver.

The annual beer fest is one of the largest gatherings of craft beer super fans, who descend on the Mile High City to sample award-winning suds from hundreds of U.S.-based breweries and brewpubs. Buffalo Wild Wings took part in the action for the first time, serving more than 30,000 visitors exclusive brews and chicken wings in a makeshift sports bar set up with high-top tables and flat screen TVs.

Leading the endeavor was Jamie Carawan, who started in June as the chain’s new vice president of brand menu and culinary. Though attending GABF was a rookie experience for BWW, it wasn’t for Carawan. 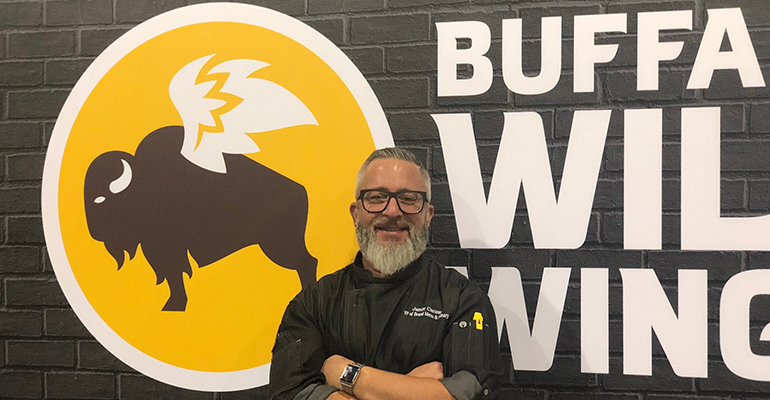 He previously worked as vice president of food and beverage Innovation at Twin Peaks Restaurants and Twin Peaks Brewery in Texas. He also spent 18 years in various roles for On the Border Mexican Grill and Cantina, including senior director of innovation.

Nation’s Restaurant News caught up with Carawan on the third day of the festival. By Saturday afternoon, the 3,600-square foot booth had served 5 tons of wings, or about 60,000 of them.

He spoke with NRN about his plan to bring medal-winning beers, new wing flavors and classic cocktails to the Atlanta-based chain’s 1,200 restaurants.

Why, after all these years, did Buffalo Wild Wings decide that this was the year to participate in GABF?

A lot of people don’t realize that Buffalo Wild Wings sells more beers than anybody in the country. There’s beer flowing all over the country through our taps. If we aren’t the greatest seller of craft beer, we’re very close to it as well. We have beers here that nobody else can get.

Is that the message for these craft beer super fans?

If you’re looking for great craft beer, you can get that at a Buffalo Wild Wings. If you want to geek out on a craft IPA, we have those in our restaurant.

So, you are debunking any myth that you only sell large national beer brands?

As far as being associated with independent craft brewers, a lot of times we are one of their first avenues to get in front of a large crowd. We tap a lot of local and regional breweries. We’re great supporters of craft beer.

What are other reasons for being a GABF sponsor?

We are able to highlight our emphasis on sports and are able to serve our fresh hot wings. If you look at our booth, there’s a lot of happy faces there.

In your restaurants, do you dedicate a certain amount of your 30 taps to rotating selections?

We call them flex taps. We partner with breweries that create beers that come specifically into our taps. We are also featuring some of the award winning GABF beers throughout the year at Buffalo Wild Wings.

How does that work? Are you serving local brewery winners in local or national restaurants?

Is that a new strategy?

Yes, because of the [GABF] association and being a title sponsor. It offers us credibility and gets people thinking about us differently.

On the culinary side, what are your plans for the menu?

One of the things I’m passionate about, especially with brands that have gotten long on the tooth, is going back to our roots — grounding ourselves in the best possible wings we can serve our guests. Making sure we have a great programming on sports. And once we get those solid, then we can start doing unexpected innovation.

What are the biggest challenges facing the industry, and chains like BWW?

One of our challenges is right now our core customer is drinking less beer.

Why are people drinking less beer?

I think craft beer industry is starting to mature, and it’s moving to bourbons and brown spirits. Also, millennials are drinking a lot of wine. Who knew that millennial males would be drinking roses, but they are. I think it’s important for us to respond to these trends and keep evolving. 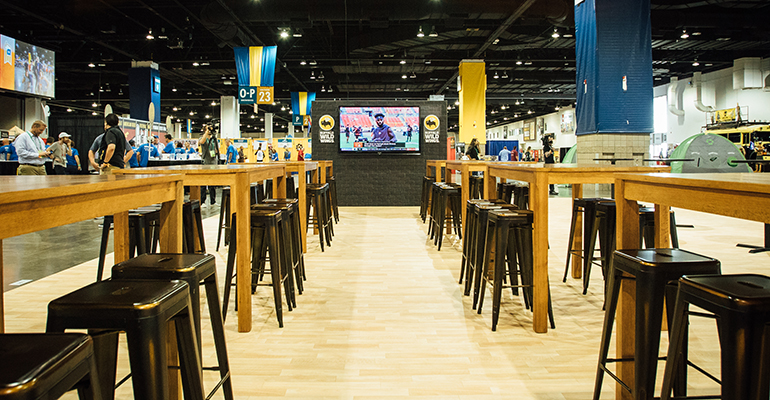 How are you evolving?

We have to give them other reasons other than wings. So having a good lunch program, a happy hour, a late night ... and a great wine program and spirits program. We’ll always leverage beer as a part of our core competencies, but we also want to make sure we have enough reach within our portfolio to bring in other diners and other drinkers.

Buffalo Wild Wings has cocktails now. What are you going to do differently?

I’m going to be focusing on classic cocktails.

When do you expect new additions to the menu?

We’ll see some things after the first of the year, closer to March then a big push next fall.

Are you shooting for new wing flavors?

We’ll start bringing in new flavors and new styles of wings that maybe people have never seen before. Just like you when come into Buffalo Wild Wings to watch your favorite team in these unexpected moments, I want those same unexpected moments at the plate.