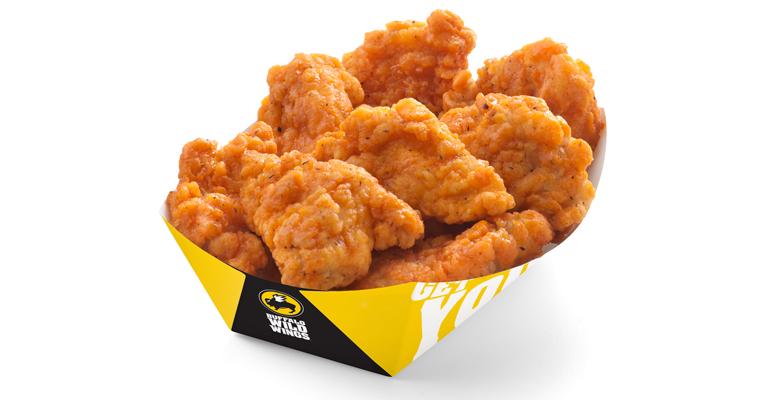 Chicken wing prices are soaring faster than expected at Buffalo Wild Wings Inc. this year, but the Minneapolis-based chain is getting some traction from a shift in its Tuesday wing promotion to boneless wings.

Buffalo Wild Wings said in July that it plans to end its Half-Price Wing Tuesdays promotion, citing higher chicken wing costs. In its place, the company said it would offer buy-one, get-one Boneless Wings — which is cheaper for the company.

In an investor presentation Monday, Buffalo Wild Wings said that the same-store sales impact from the shift has been “better than forecasted.”

All company locations, and 39 franchise locations, have converted to the new offering. Buffalo Wild Wings has 1,200 locations in total.

The spike in chicken wing prices, coming largely due to demand for the product, has come at the wrong time for Buffalo Wild Wings — whose longtime CEO, Sally Smith, is retiring and whose board was recently overhauled in a shareholder vote. The chain’s same-store sales fell in 2016 and are down again so far this year.

Traditional wings represent about 31 percent of Buffalo Wild Wings’ cost of sales, compared with about 13 percent for boneless wings. Buffalo Wild Wings paid a “historically high” $2.05 per pound for bone-in wings in the second quarter. Analysts lowered earnings targets for the company on Tuesday, citing the higher wing costs and the impact from the hurricanes.

Stephen Anderson, an analyst with Maxim Group, lowered the company’s price target to $145 from $160 — the stock trades at just under $110, based on expected lower earnings.

Yet he also sees improvement in the coming year. “We expect margins to improve measurably from lower food costs” from the shift toward boneless wings and an expected shift next year to lower cost bone-in wings, Anderson said.

Chicken wing costs have spiked largely due to higher demand. Production of chicken wings is naturally limited, given that there are only two per bird.

Many chains over the years have sold more “boneless wings,” made from chicken breast, which is in greater supply and costs less. By shifting its promotion to boneless, the company is giving up some traffic, especially in take-out orders, but is gaining on profits.

Some analysts worried that ending its popular Half-Price Wing Tuesdays promotion would prove disruptive. The new promotion is expected to have lower takeout sales but generate higher margins.

“We are encouraged that the transition to a new promotional format of Wing Tuesday has disrupted sales less than expected,” Cowen & Co. analyst Andrew Charles said in a note. Still, sales are a bigger concern. After years of consistently strong same-store sales, they turned south in 2016 and remain there, including a 1.2 percent decline at company locations in the quarter ended June 25.

Buffalo Wild Wings is hoping to improve takeout and delivery in its bid to win back customers, while also leaning on the chain’s “Fast Break Lunch” to drive noontime business. Delivery is currently available at 220 locations, with plans to expand that to 250 company units by the end of the year.

And the chain said on Monday that it expects a larger-scale rollout next year of its new small format Buffalo Wild Wings. The company is testing the format, which has limited service and a narrower menu, in Minnesota and in other markets. The format is expected to have average unit volumes of $1 million to $1.5 million and there is an opportunity for 200 or more locations.

Until Buffalo Wild Wings can show sales growth, however, analysts believe the shares will remain under pressure.

“We believe that shares will likely be range-bound until evidence emerges with respect to a top-line recovery,” Lynne Collier, an analyst with Canaccord Genuity, said in a note.