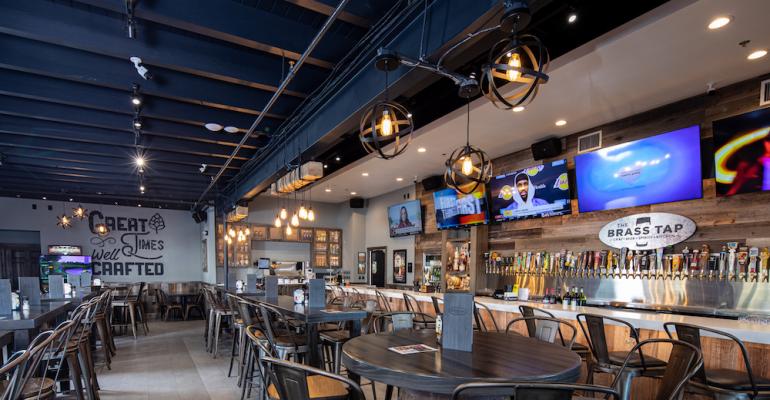 CEO Chris Elliott says the chain is poised for expansion

The Brass Tap, a casual-dining beer-focused chain based in Tampa, has completed the rollout of a new menu at its 40 locations, Chris Elliott, CEO of FSC Franchising Co., parent of The Brass Tap and Beef ‘O’ Brady’s, told Nation’s Restaurant News.

The menu revamp is part of a refresh of the brand, which also includes a new prototype with a larger kitchen, updated lighting and a reworking of the indoor and outdoor spaces so they’re more in synch.

“You feel like the inside and outside are connected,” Elliott said. “It just has a good feeling aesthetically.”

FSC hired a consulting chef at the end of 2019 to rework the menu to focus on more trendy and sharable items as well as food that pairs well with beer, Elliott said. They began testing the menu in early 2020 before the pandemic hit, which put a pause on the rollout, so it was only recently completed.

He said the revamp was necessary as food sales had grown over the years from about 20% of total revenue to as much as 42% at some locations.

New menu items include roasted cauliflower, guacamole, a brisket grilled cheese sandwich, southern chicken salad, a chocolate chip cookie skillet and a line extension of its loaded fries to include sweet potato fries, potato tots and crinkle-cut fries topped with choice of protein, queso and one of 12 new signature sauces.

The chain also added a fried chicken sandwich to the menu.

Elliott said The Brass Tap rebounded well from the pandemic as the concept benefited from pent-up demand after the lockdown.

“At one point back in the spring of last year our sales were down 80%. So that was a bleak time and we weren’t sure what the future held, but we have come back very strong: We’re going to have a record year this year — the best in the company’s history,” Elliott said, adding that, thanks to Paycheck Protection Program loans, they didn’t lose any restaurants.

“Everybody’s pleased, but a little amazed at how quickly the business came back,” he said, although he acknowledged that business has seen “a little bit of softening,” due to the delta variant, particularly considering that a dozen Brass Tap locations are in hard-hit Florida.

However, the Modesto, Calif., location that opened around April this year saw a record $80,000 in sales its first week, even in the face of restrictions that forbade people from standing in the restaurant or sitting at the bar.

“We basically had someone at the door that would let people in as a table emptied, and there was a line out the door for the first couple months we were open,” he said.

That restaurant actually was ready to open in January, but at that time indoor dining was only allowed at 25% capacity and the franchisee didn’t think it was worth it, Elliott said.

The Modesto location is one of the new prototypes, “and it just gives us a good feeling about the future of the brand,” he said.

He added that several new restaurants are in the pipeline and he expects five new locations to be open by the end of the year.

New markets include Maryland, Virginia and the Texas cities of Houston and Dallas.