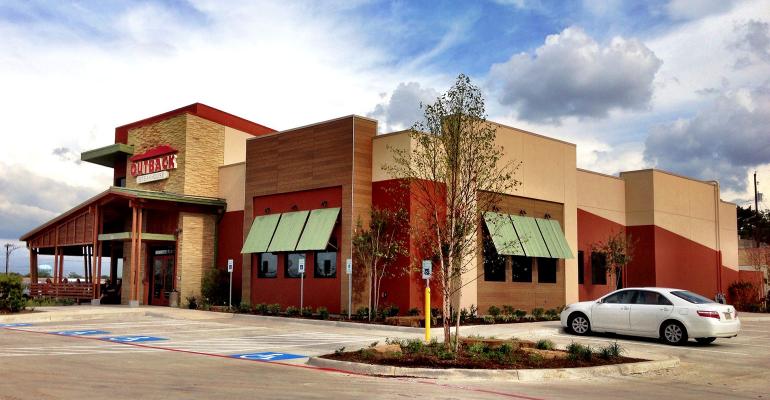 The Tampa, Fla.-based casual-dining company reported that combined same-store sales for U.S. restaurants were up 2.9 percent in the third quarter ended Sept. 30. Its largest brand, Outback, contributed an increase of 4.6 percent in the period.

New York-based Barington Capital Group L.P. on Oct. 22 sent a letter to Bloomin’s board, following up on one in February, expressing concern over what it called “the company's sustained period of underperformance.”

In Bloomin’s response, Liz Smith, the company CEO and chairman, said the company had “achieved an increase in sales and market share. We have also taken actions to reduce overhead and reinvest those savings to improve our digital and IT infrastructure, as well as to enhance our growing off-premise business.”

Smith did not address the activist shareholder in her post earnings release comments Monday, but she said Outback was seeing the results of investment in loyalty and delivery programs.

“We continue to develop incremental sales layers to accelerate growth,” Smith said. “This includes shifting media spend from mass marketing to digital personalization, the Dine Rewards Loyalty Program and the rapidly growing off-premise business. Our strategic investments are gaining traction and are putting us in a position to capitalize on the change in customer dining behavior.”

She said the company’s investment priorities were “appropriately aligned with these evolving customer preferences and that momentum in share gains will continue.”

“We have off-premises now about 13 percent of our business and grew in the low-double digits in Q3,” Smith said. “So, everything about that business is really coming together.”

Bloomin’ also now has more than 7.2 million members in the cross-platform

“Our strategic investments are gaining traction and are putting us in a position to capitalize on the change in customer dining behavior,” she said.

The program’s focused customer relations management platform has helped Bloomin’ reduce advertising spending from 3.8 percent of sales in 2016 to about 3.1 percent over the past two years, she said.

The company’s units in Brazil, where Bloomin’ saw third-quarter same-store sales decline 3.3 percent amid political unrest and delivery problems, finished the third quarter in positive territory in the month of September, the company said, and Smith said the downturn appears to be temporary.

“The country has experienced a difficult environment due to unrest leading up to yesterday's presidential election,” Smith said. “This has led to protests and a lengthy truckers' strike that badly hurt the Brazilian economy, causing supply shortages and transportation gridlock that resulted in numerous loss operating days for many businesses, including our restaurants. We believe these dynamics were more event-driven rather than a reflection of the improving underlying health indicators of the Brazilian economy.”

Bloomin has 92 Outbacks and 12 Abbraccios Cucina Italian units in Brazil. It first opened Abbraccio, a version of Carrabba’s, in 2015.

“There's no reason in our mind why Abbraccio shouldn't enjoy the success and the runway of the Outback, considering Italian is the No. 2 category down there next to beef in casual-dining and significantly underpenetrated,” Smith said.

As of Sept. 30, Bloomin’ Brands had 1,488 restaurants, including 733 domestic Outback Steakhouses, 227 Carrabba’s, 198 Bonefish Grills, 70 Fleming’s and five other units. The company owned and franchised 255 restaurants abroad.