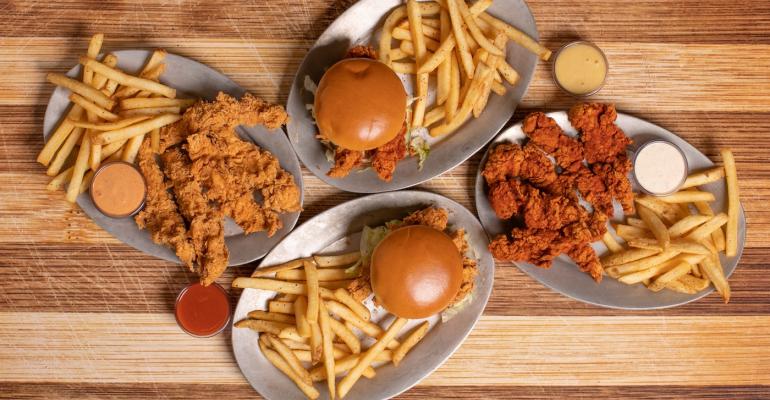 “Our goal is to achieve $75 million in incremental sales on an annualized basis,” said David Deno, CEO of the Tampa, Fla.-based company, said on a fourth-quarter earnings call. “The chicken segment is a large and rapidly growing category, and we look forward to expanding its opportunity for years to come.”

Bloomin’ began testing the Tender Shack virtual brand since September and expanded it in October.

The Tender Shack menu on DoorDash ranges in price from $9 to $10 for chicken sandwiches and tenders and $25 for party platters with 20 tenders and sauces. Additional sauces are 50 cents each, and cookies are $1. The two signature seasoning options are Dang Good Seasoned or Nashville Hot AF (As Fire)  and five sauces are offered, including honey mustard, buttermilk ranch and barbecue.

Deno said Tender Shack is another level in Bloomin’s off-premise business, which has grown to 37% of revenue for the company.

“Our goal is to maintain and improve service levels so we can continue to grow this channel,” he said, and it uses primarily Outback and Carrabba's restaurants.

“We have terrific geographic coverage given our national footprint,” he said, adding that Tender Shack has a different ordering pattern than at the existing restaurants, especially customer use in off-peak hours.

About 80% of Tender Shack customer have never ordered from the other Bloomin’ brands.

He said Aussie Grill has opened in Brazil and in Hong Kong “and it is being tested in New York to see if that broader menu is more interesting than Tender Shack.”

“Obviously we're opening up because we like the volumes and profitability we see out of that business,” Deno said. “Right now, we have 19 Aussie Grill virtual businesses in Brazil. Our hope is to have 50. And it's very similar in thinking and marketing and style as Tender Shack.”

Bloomin’ Brands has more than 1,450 restaurants in 47 states, Puerto Rico, Guam and 20 other countries, some of which are franchise locations.

As of Feb. 14, the company said about 99% of its U.S. restaurants were open with limited in-restaurant dining capacity, as per local restrictions, vs. 85% as of Dec. 27.