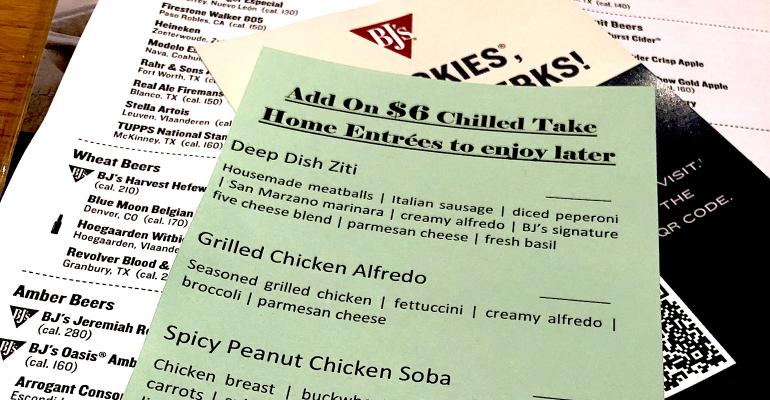 Ron Ruggless
BJ's, which leaned on QR code menus during the pandemic, is returning physical menus to its restaurants in November and expects higher check averages.
News>Casual Dining

After tapping into quick-response code smartphone menus as a COVID-19 pandemic health precaution, BJ’s Restaurants Inc. units are bringing back physical menus – and anticipating higher check averages because of it.

Greg Levin, CEO and president of the Huntington Beach, Calif.-based casual-dining chain, said Thursday in a third-quarter earnings conference call that the physical menu is worth about 70 cents more per average check than the QR versions.

“One of the things we heard from our guests is they love having a physical menu,” Levin said. “I think we were all really excited to get the HTML menus, because we were going to eliminate printing costs and so forth. But we've seen our guests like a physical menu.”

BJ’s will roll out a new physical menu in November, Levin said.

Meanwhile, Levin said BJ’s continues to face challenges in staffing, supply chain and traffic, for which growth stalled in August and September because of the COVID delta variant concerns.

“During the quarter, over 20% of our restaurants were placed on limited menus due to both staffing and supply chain shortages,” Levin said. “Beginning in August, with the spread of the COVID-19 delta variant, casual-dining industry comparable sales took a step backwards.”

He said he expects sales to improve as BJ’s seats more tables, expands back to pre-pandemic hours and returns all restaurants to full menus by early November.

BJ’s re-opened its Richmond, Va., restaurant in August and plans to open at least eight restaurants in fiscal 2022. “The two new restaurants we opened this year, Lansing, Mich., and Merrillville, Ind., both continue to perform above our high expectations and generated sales of $119,000 and $114,000, respectively, in our most recent week or more than 10% higher than our system on average,” Levin said.

“In terms of dayparts, lunch and late night remain the most impacted, which — when combined — weighed on our comp by more than three percentage points in the quarter,” he said. “We expect lunch to rebound once more employees return to offices in the New Year, a more delayed timeline than we expected before the delta spread.”

“Overall, we lost approximately 25,000 operating hours across the system in the third quarter versus the same period in 2019 — or approximately 10% of our hours — concentrated in the late-night daypart,” he said.

“I'm not sure anybody has come up with the magic pill yet, and we hear all the different initiatives out there,” he said. “We do things like team member appreciation; we do raffles, shift raffles, referral bonuses and so forth.”

“A lot of team members would like to have more predictability and be able to work around certain parts of their schedule,” he said, adding that company works to provide a culture that helps retain employees.