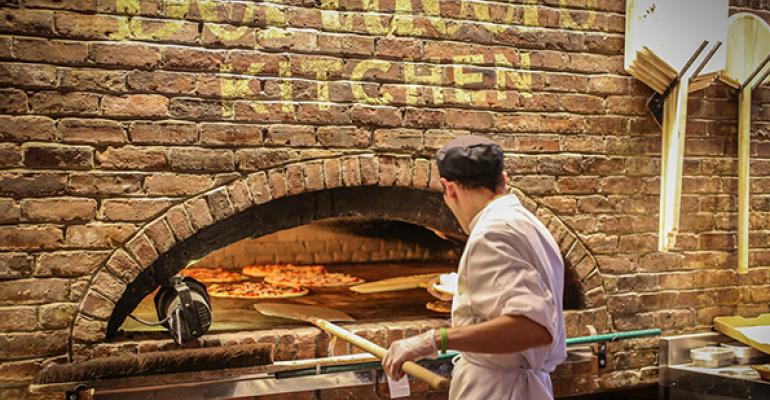 The Bertucci’s Kitchen format opens the casual-dining concept’s kitchen to the dining room to provide theater-style cooking, and modifies the bar area. It debuted in June in Nashua, N.H., and in November in Braintree, Mass.

“Bertucci’s Kitchen is taking the idea of theater — and the show elements around food and the creation of food — and bringing it out into the dining room,” Freeman told Nation’s Restaurant News. “Guests can engage and watch the whole preparation process of food take place.”

Boston-based Bertucci’s is planning at least three more conversions in early 2015, Freeman said, working on designs for two Kitchens at existing units in the Boston area and one in Virginia.

“We’re going to continue to roll this out,” Freeman said. “We’ll probably accelerate the development in ’15 going into ’16.” The company has identified about 60 of its total 88 units that can be converted, he added.

The conversion costs about $300,000, which includes renovating the bar, Freeman said. The first Nashua conversion saw same-store sales increase in the double digits, he said, and the month-old Braintree location “has mirrored that.”

Overall, Bertucci’s has been pleased with the results of the Kitchen conversions. “It’s still early, but it’s an opportunity for us to sell a little bit higher-end experience for casual dining,” Freeman said.

Freeman added that he expects to see per person check averages to increase. Currently, Bertucci’s has a check average of between $15.50 and $16, depending on location.

Adult beverages are also growing as a percentage of sales in the two units with the revamped bar, he said.

“We’re moving our bar program to another level with the conversions of the kitchens,” Freeman said. “We’ve added a fresh-squeezed-juice program relative to the cocktails and redesigned it to have more theater.” The bar serves frozen cocktails in the summer and seasonal drinks the rest of the year.

Bertucci’s also introduced a new wine format with a “little-more-pour” program, offering the standard six-ounce glass and a larger eight-ounce version, and a higher tier of wines. “The guests feel they are getting a better value,” Freeman said. About 60 percent of wine sales by the glass are in the “little-more-pour” version, he added.

With the Kitchen renovation, Freeman said the two units have seen some shift from to-go customers to dine-in, which he credits to a higher level of engagement between staff and customers.

“We have a lot of people who just go up to the counter and watch the food being made, whether it be at the induction-top pasta station or the pizza station or the salad station,” he said.

The induction cooktop doesn’t require a vent hood, Freeman said, “and it allows the smells to get out. It also engages senses in different way. For example, you get to smell the garlic being roasted for the fettuccine.”

Bertucci’s has restaurants in 11 states.

Correction: Dec. 3, 2014  An earlier version of this story misstated the state where Nashua is located. It is New Hampshire. The story also misstated the number of states in which Bertucci's operates. The company has restaurants in 11 states.