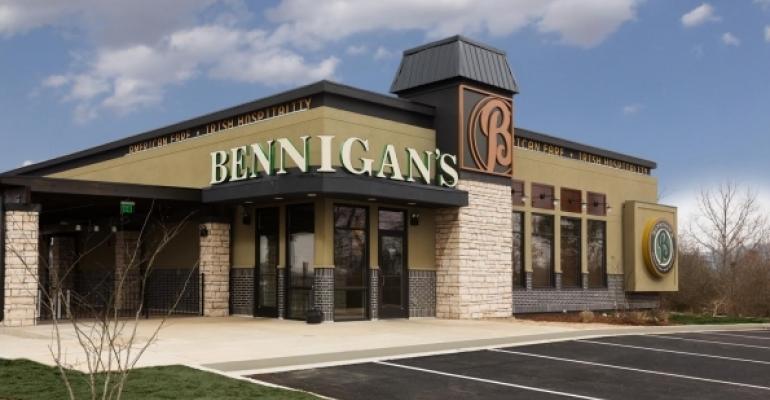 The Florida unit is modeled after an existing location in Fayetteville, Tenn.

Bennigan’s Franchising Co. plans to open a second prototype casual-dining restaurant in Melbourne, Fla., in midsummer modeled after a new unit that opened earlier this year in Fayetteville, Tenn.

Components of the Fayetteville restaurant will also be used in conversions, such as one underway in The Woodlands, Texas, north of Houston, said Paul Mangiamele, president and chief executive of Dallas-based Bennigan’s Franchising, in an interview earlier this month.

“We worked on the investment costs and the return on that investment and a franchise model with compelling unit economics,” said Mangiamele, who took the helm of Bennigan’s in May 2011, of the Fayetteville restaurant.

Bennigan’s Franchising Co. acquired the Bennigan’s brand in 2008 after parent S&A Restaurant Corp., a division of Metromedia Restaurant Group, and affiliated companies filed for Chapter 7 bankruptcy liquidation and closed about 240 company units. Bennigan’s has done several conversions, but this is the first ground-up unit since 2010.

Bennigan’s currently has 28 units domestically, down from 35 in 2011, and 57 in international markets, for a total of 85 locations.

“In order to move forward, sometimes you have to subtract,” Mangiamele said. “To reposition the brand with the franchisees and the locations that are capable of producing the sales and unit-level profitability, we had to make some hard decisions.

“Some of the locations were in trade areas that had seen the good days already pass them by,” Mangiamele added. In some cases, the franchise agreement and the lease agreement expired.

“I don’t want to be ever guilty of keeping a restaurant open at the expense of a franchisee to post a number,” he said. “That’s short-sighted.”

The new Tennessee restaurant was built by franchise owners David and Melissa Hunt, who also own and operate a Hampton Inn hotel nearby.

Mangiamele said the unit draws from a trade area of about 30 miles, reaching into northern Alabama.

“The bar is now on the same level, not raised, and it’s a shotgun, one-sided bar,” Mangiamele said.

Partitions separate the bar from the dining room, and stained glass was incorporated back into the bar “so we still have touchstones to the look and feel” of the original Bennigan’s. The concept was founded in 1976.

As well as working on menu enhancements, Mangiamele said Bennigan’s is looking to capitalize on the bar and employ innovation in the beverage program.

Traditional cocktails are popular, Mangiamele said, “but you have to do it with a twist, whether it’s the garnish or the glassware.”

Bennigan’s, for example, has introduced a new signature Irish Coffee, which fits its Irish theme.

Mangiamele said the company also plans to expand its three, smaller “Bennigan’s on the Fly” versions, one of which is in South Korea and another at Dallas/Fort Worth International Airport. The third Bennigan's on the Fly is a food truck opened by David Hollinger, a franchise owner in Panama City, Fla., that serves a nearby Army base.

Hollinger also has negotiated an agreement to bring back Steak & Ale, for which Bennigan’s owns the franchising rights. All Steak & Ale units were closed in the bankruptcy.

Mangiamele said he sees options for Bennigan’s on the Fly at universities, airport terminals, hospitals and other non-traditional locations.