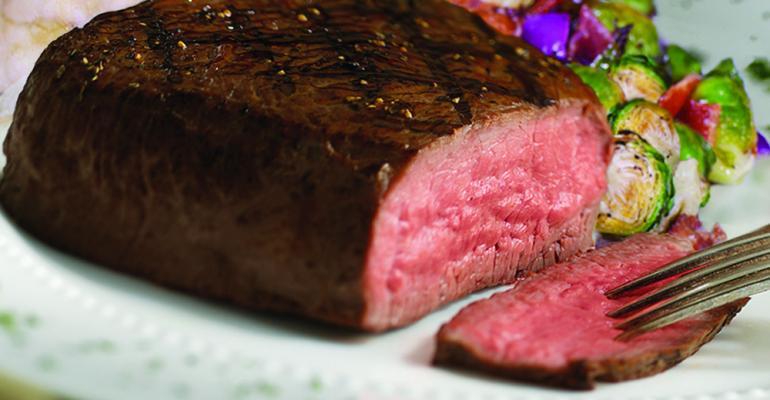 The last Steak and Ale restaurant closed its doors ten years ago, but parent company Legendary Restaurant Brands has revived some of its menu items at sister chain Bennigan’s. Steak and Ale fans on Facebook “have been clamoring for the return of their favorite restaurant, and we’re doing our best to deliver. In the meantime, we’re reconnecting the emotional ties to our brands by adding three of Steak and Ale’s most popular entrées to Bennigan’s menu. We’re harkening back to a time when food was deliciously authentic and made from scratch; when restaurants delivered superlative service and patronage was appreciated,” Legendary Restaurant Brands chairman and CEO Paul Mangiamele said in a press release.

Phrasing on the updated menu also refers to Steak and Ale. The “Our Story” section at the bottom of the menu’s cover says:

“More than half a century ago, Steak and Ale created casual dining, and together with sister brand Bennigan’s, they’ve been refining and defining it ever since. Now, Legendary Restaurant Brands has taken the next bold step by fusing these iconic brands with the debut of several signature Steak and Ale menu entrees on Bennigan’s new menu. These bold, innovative dishes, rich in nostalgia, are made from scratch every day with recipes that have stood the test of time. We know you’ll enjoy these Legendary offerings that truly set Bennigan’s apart from the rest. Here’s to The American Legend!”

Whether Steak and Ale actually invented casual dining is open to debate. Its founding in 1966 by Norman Brinker was preceded by the opening, by Alan Stillman, of the first TGI Fridays, in New York City, in 1965. Then again, TGI Fridays was more of a bar than a restaurant at the time — Stillman has taken credit for it being the world’s first singles bar.

“This isn’t just another menu release; this is menu disruption at its finest,” Mangiamele said in the release. “And it’s yet another bold and innovative move we’ve taken to build on our growth momentum and reclaim our leadership role in the casual dining category. We’ve gone back to our original DNA with these authentic recipes to create, hands down, the best menu we’ve collectively produced in years.”

Mangiamele became president and CEO of Bennigan’s Franchising Co., the franchisor of both Bennigan’s and Steak and Ale, in 2011. In 2015, he created Legendary Restaurant Brands to complete a management buyout of Bennigan’s Franchising’s majority owner. At the time, he announced plans to resurrect Steak and Ale, all locations of which were closed after parent Metromedia Restaurant Group declared Chapter 7 bankruptcy in July 2008.

Around 140 Bennigan’s restaurants remained open globally after the bankruptcy, but that number has since shrunk to 32.

However, a spokesperson said four locations are currently under construction and are slated to open later this year.