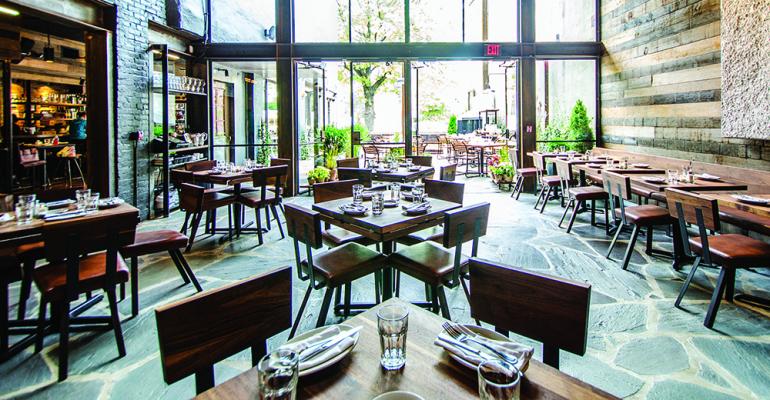 The interior of a Barcelona location.
News>Casual Dining

The Irving, Texas-based Del Frisco’s, which closed on its $325 million acquisition of Norwalk, Conn.-based Barteca Restaurant Group on June 27, has hired an outside consult to help integrate the two companies and expects the process to be completed by the end of 2019, said Norman Abdallah, DFRG CEO, in a second-quarter earnings call.

“Once completed, there will be cost-saving opportunities in purchasing across the portfolio, because of combined know-how and capabilities for best-in-class supply chain,” he said, adding that general and administrative expenses should also decline.

“From a real estate standpoint, we will have significant leverage with developers and landlords because of our distinctly positioned growth brands with industry-leading economics and the respect that Del Frisco's name has with national developers,” Abdallah said.

Del Frisco’s has proven attractive to landlords for the upscale consumers it draws, he said, and the company plans to leverage that with Bartaco and Barcelona.

The company already has seen an example of that leverage, Abdallah said.

“There is a location that Barcelona was looking at and we were looking at,” he said. “We are able to secure the location instead of Barcelona due to our Del Frisco's guarantee, and we came in at a $30-per-square-foot price lower than what Barcelona would have been able to get the site for.”

Abdallah added that the outside consultant expects the integration of the two companies to go well “because our cultures are so similar.”

Jeff Carcara, a former operations chief with Del Frisco’s before joining Barteca, stays in his position but returns to the Del Frisco’s team as CEO of the new “Emerging Brands” division, Abdallah said.

“Both teams have engaged each other very quickly, and we're really operating as one team already, which is fantastic,” he said. “It allows us to keep everybody focused on the day-to-day operations of the restaurants, while we continue to build the best-in-class shared services.”

Since the acquisition closed on June 27, the first day of Del Frisco’s third quarter, Barteca’s operating performance was not included in Del Frisco’s financial results for the most recent reporting period.

For the second quarter ended June 26, DFRG swung to a net loss of $1.6 million, or eight cents a share, from a profit of $2.1 million, or nine cents a share, in the same period last year. Revenues rose 9.4 percent to $90 million from $82.3 million in the prior-year quarter.

The company said that Barteca’s equivalent second-quarter sales, while not included in DFRG’s earnings, totaled $36.9 million, which included $16.7 million at Barcelona and $20.1 million at Bartaco. Combined same-store sales at both brands declined 1.2 percent in the second quarter, increasing 1.8 percent at Barcelona and declining 4 percent at Bartaco.

Bartaco opened a new restaurant in the second quarter, bringing its total to 17. Barcelona has 15 restaurants, with two projected fourth-quarter openings in Charlotte, N.C., and Raleigh, N.C.

In guidance for fiscal 2018, executives said the company expects to open four Del Frisco’s Double Eagle Steakhouses, three Del Frisco’s Grilles, the two Barcelonas and up to four Bartacos. Closures in the fiscal are expected to range from four to seven, with up to four Grilles, two Sullivan’s Steakhouses and one legacy Bartaco. Two Grilles and two Sullivan’s have already been closed this year.

In May, DFRG said it was again seeking strategic options for the then-14-unit Sullivan’s.

“We have received several bids from interested parties to purchase the concept and continue to engage in discussions,” Abdallah said Friday. “There can be no assurance if or when we will consummate a transaction or the terms of any transaction.”

The company said it expected systemwide same-store sales for the fiscal year to be between negative 1.5 percent and positive 0.5 percent.

On strong area of sales this year, Abdallah noted, has been private dining at the Double Eagle and Grill locations. In the second quarter at the Grilles, he said, private-dining revenues rose 48 percent over the same period last year.

“Private dining continues to be an opportunity for us that we are pursuing through centralizing resources, introducing a new software platform and improving our private-dining menu options,” Abdallah said.