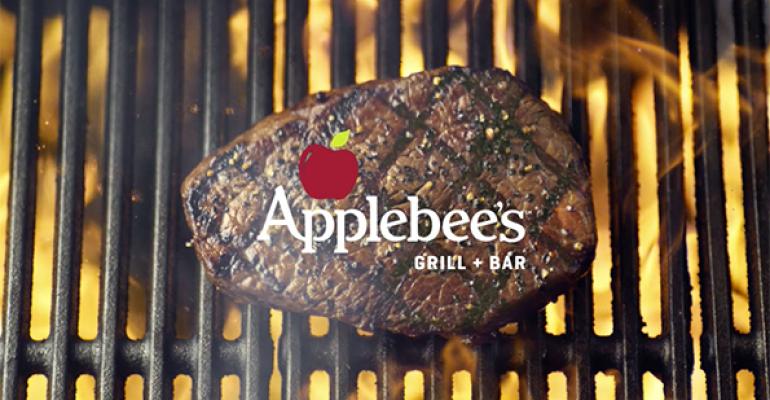 <p>Operator aims to &ldquo;take back the neighborhood&rdquo; with new menu platform that puts hand-cut meat at the center of the plate</p>

Applebee’s Neighborhood Grill & Bar launched on Monday a sweeping brand transformation that puts hand-cut steaks cooked over new wood-fired grills at the center of the plate.

Over the past several months, domestic franchisees across the 2,000-unit chain have quietly replaced their grills with a new model that uses American oak wood, infusing food with a smoky flavor and their respective neighborhoods with an enticing scent.

The ungraded “no roll” beef the chain previously used has been replaced with USDA Choice steaks, a significant upgrade. And more than 100,000 employees systemwide have undergone a comprehensive retraining to improve service and better communicate the new menu, including some 6,000 workers who have been certified as meat cutters.

“We’re going to take back the neighborhood in a meaningful way,” Julia Stewart, chairman and CEO of parent company DineEquity Inc., and Applebee’s brand president, told Nation’s Restaurant News. “It’s about standing out from the crowd.”

For Applebee’s, the nation’s largest casual-dining chain in terms of sales, the move is a massive effort that involved the installation of new equipment and related local permitting, working with vendors on new meat specs, creating advertising and merchandising, and training employees — all while keeping the changes largely under wraps to allow the company a “big ta-da” as the brand attempts to rewrite its story after a year of sales declines.

Founded in Atlanta in 1980, Applebee’s was acquired eight years ago for $2 billion and joined with IHOP under Glendale, Calif.-based DineEquity. Since then, Applebee’s has undergone a brand revitalization that included a remodeling and overhaul of about 80 percent of the menu as DineEquity transformed the chain into a fully franchised, asset-light brand.

Earlier revitalization efforts were “foundational,” but just not big or bold enough to change the story for the 36-year-old brand, Stewart said.

The hand-cut steaks and wood-fired grill platform, however, is “a big enough wow,” Stewart said.

“What makes this such a game changer is it starts talking about the food and flavor profile in a very different way,” Stewart said. “It elevates the perception that we’ve got this incredible quality food.”

It also marks the beginning of a transformative year for the brand that will include a new prototype design and remodeling program, along with the largest marketing effort in its history.

Starting Monday, national TV ads will showcase the new steaks and other items cooked on the “fire-breathing workhorse” grill.

Applebee’s is “coming out guns a blazin’,” with “unmiss-able media” that will cut across prime, cable and broadcast TV, including during finales of popular shows like “Scandal” and “Grey’s Anatomy,” said Darin Dugan, Applebee’s senior vice president of marketing and culinary.

In a first for Applebee’s, the food-focused ads, created by the chain’s new agency Barkley, will also be shown in movie theaters, on Pandora, on The Weather Channel and on the online GPS system Waze.

The marketing message attempts to move Applebee’s away from perceptions that casual-dining food is largely processed, microwaved or comes from a package.

“We’re putting the ‘grill’ back in grill and bar,” said Cammie Spillyards-Schaefer, Applebee’s vice president of culinary and menu strategy, who left the culinary team at Outback Steakhouse to join Applebee’s earlier this year. “We’re taking it to the next level for an off-the-chart grill experience.”

The new grills, which replace an all-gas model, use gas for ignition and temperature control, but logs of wood to infuse flavor. The logs will also be piled near restaurant entrances to convey the new wood-fired grill platform to customers.

Meat will come into the restaurants as a butt or rack, and will be hand-trimmed and cut into steaks or chops in each restaurant by meat cutters trained for consistency.

The steaks, which are aged for flavor, come in three sizes: 6 ounces, 8 ounces and a new 12-ounce “butcher’s reserve.” Only a few butcher’s reserve steaks will be cut each day, so customers will have to come early to claim one.

“I love the fact that we run out of them every day,” Stewart said. “It’s a larger steak and a bone-in product, and it’s to die for.”

The steaks are seasoned and lightly marinated, but Applebee’s does not use phosphates, which are commonly used to help meat hold a marinade, she said.

Applebee’s average check of $13.75 will stay the same in part because commodity pricing for beef is favorable, but also because of the power of DineEquity’s purchasing co-op, which Stewart said has changed the marketplace.

Steak now accounts for about 10 percent of Applebee’s sales, and Stewart expects that figure to grow with the new wood-fired grill program.

With the proteins comes a choice of sides, including new offerings like grilled vegetables; sweet potatoes with cream, butter and brown sugar; crispy potato wedges; garlicky green beans; and a four-cheese macaroni and cheese dish, which was an entrée on the previous menu.

The grilled proteins will also be featured across the menu in salads and appetizers like a steak quesadilla and black bean soup.

The new menu is streamlined somewhat, as Applebee’s readies to expand on the wood-fired grill offerings, including burgers down the road.

Applebee’s tested the new menu platform in 50 to 60 restaurants in five markets across the country. One market was in New England, which, in the most recent quarter, was the only region to post positive same-store sales.

“Not all restaurants in New England were in the test, but clearly it had an impact,” Stewart said.

For DineEquity and its franchisees, the installation of the new grills, the training and the marketing campaign totaled a roughly $75 million investment, although Stewart declined to break down that figure.

Applebee’s is also working to upgrade its bar program, and is beefing up off-premise sales. Earlier this year, the chain launched a new app designed to boost carside-to-go business.

Sister brand IHOP will soon offer delivery through a third-party partner, and Applebee’s will likely follow suit, Stewart said. The chain is working on packaging that will help the grill-focused menu travel better.

Next up for Applebee’s franchisees is a new prototype design, still in test, to be unveiled in detail later this year.

Stewart described the new look as “cleaner and more contemporary,” with less clutter and display kitchens. For the remodeling program, franchisees will be asked to borrow from the prototype where it makes sense for their restaurants, Stewart said.

“In the prototype, the bar is to the right. But for restaurants with the bar in the middle, they won’t have to move the bar,” she said. “About 70 percent of the prototype design will pull through.”

With Applebee’s and IHOP now consolidated under one roof at the Glendale headquarters, where a new state-of-the-art test kitchen is being installed, DineEquity is also searching for a third concept to add to its portfolio.

Stewart said the company has its sights on acquiring an existing brand, although nothing is imminent.

The company is looking for a fast-casual concept, with “forward-looking” food that won’t compete with Applebee’s or IHOP. The target will probably have fewer than 200 units, with a lot of potential for massive and quick growth for the company’s 400 franchisees, many of whom are “well heeled” and eager to expand, Stewart said.

“I don’t want to buy something I have to spend five years fixing. I want something fairly healthy that has good four-wall economics,” she said.

But Stewart said she would pass on concepts with puffed-up valuations that think they’ll be the next Shake Shack.

“There are a lot of people thinking their concept is worth a 50 multiple. So you have to bring them back to sea level,” she said.