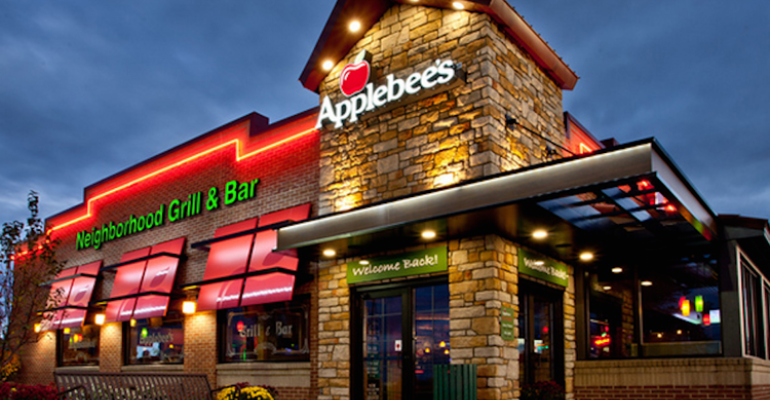 'The pendulum has swung," Applebee's president John Cywinski says, and the future of the segment is bright.
News>Casual Dining

Restaurant customers, many of whom spent more than a year relegated to takeout and delivery or outdoor dining, are flooding dining rooms again — moderated by some remaining local restrictions, of course. But the dining rooms are a little different, with the new, possibly permanent addition of sanitation specialists, as well as contactless ordering options and technology that makes it easier for servers to do their jobs.

Meanwhile, the back of the house now has “to-go specialists” who take care of a newly important revenue stream.

Those were some of the observations that Applebee’s Neighborhood Grill & Bar president John Cywinski shared with attendees of a webinar on “What’s Next for Full-Service Restaurants?”, part of Nation’s Restaurant News’ educational series CREATE: The Future of Foodservice.

“The pendulum has swung and the future is really bright,” Cywinski said, noting that March and April of 2021 were some of the 1,600-unit chain’s best months in its 41-year history. He said guests were staying longer, drinking more, ordering more appetizers and desserts and tipping more generously than they had in the past.

“I do believe that sitting down and connecting with another human being in a fairly disconnected world, someplace other than your home, over a good meal and a drink, and being served is really important right now and we're seeing that in in our business,” he said.

On top of that, off-premises sales now account for around one-third of Applebee’s total sales, reflecting a trend that has accelerated during the pandemic.

“We [now] compete very directly with fast-casual and QSR,” Cywinski said, noting that car-side delivery is now a core competency of Applebee’s franchisees and that the casual-dining chain is now part of the consideration set for customers who want takeout or delivery in a way that they weren’t before the pandemic.

Applebee’s, like many other casual-dining chains, has also created other revenue streams that aren’t reliant on dining rooms, including its Cosmic Wings virtual concept and delivery-only ghost kitchens, of which Applebee’s currently has four: one in Los Angeles, two in Philadelphia and one in Miami. He said they would allow Applebee’s to have a presence where the economics of a large full-service restaurant might not be workable.

Cywinski said the pandemic also gave Applebee’s the motivation to execute a much-needed trimming of its menu.

He said all restaurants over time suffer from menu bloat.

But plummeting sales and the urgent need to trim costs allowed the chain to reduce its menu by 35%.

He said they eliminated items that were complicated, that had ingredients that weren’t used in any other dishes or that didn’t sell well.

“That benefited the brand on a number of fronts,” he said: They became better at making the menu items that were still on the menu while reducing waste and lowering food costs.

Meanwhile, QR codes were installed on tables, letting guests order and pay without touching a physical menu. He said about a third of guests, of all ages, use that option.

A growing number of servers also were equipped with tablets to use for ordering and taking payment, allowing them to serve more customers and make more money, he said.

New geofencing technology also allows them to know when customers have arrived for their takeout orders, he added.

Improved capabilities beyond their four walls and streamlined service within them will help full-service restaurants succeed in the years to come, he indicated.