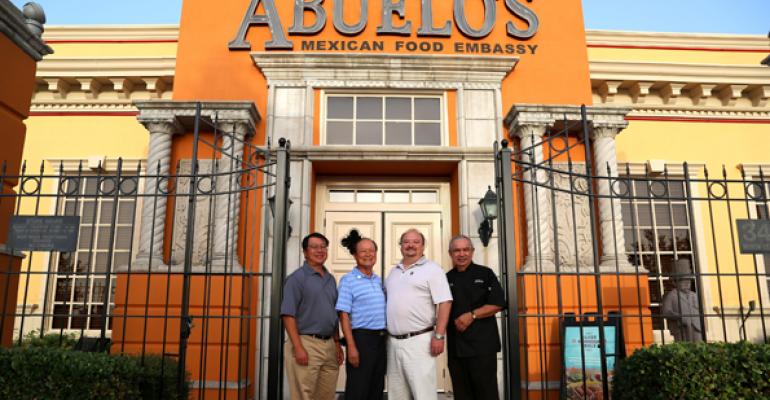 The Texas-based brand caters to customers&#39; desire for bolder flavors and healthier options.

Abuelo’s Mexican restaurants, which celebrate 25 years in 2014, has launched a refreshed look and menus to appeal to current tastes.

Founded in Lubbock, Texas, in 1989 and owned by Food Concepts International, Abuelo’s has recently rolled out items with Asian flavors to the 40-unit casual-dining chain.

“We certainly are trying to cater to the trend of bolder flavors and healthier and lighter options,” said Robert Lin, president of Lubbock-based Food Concepts International.

Some newer items include Firecracker Shrimp, which is flash-fried and tossed in a chile aioli and served with a spicy peanut dressing and napa cabbage and mango relish. The preparation is available as an appetizer or a taco entrée.

“We have also been going through a process of refreshing our restaurants and uniform standards to be a bit more contemporary,” Lin said, noting new lighting packages and a less formal décor.

Lin said casual-dining consumers have changed significantly over the past 25 years.

“What we have seen, especially the past six years or so, is almost a bifurcation of consumer demand,” he said. “On one side, there is an increased emphasis on cost and convenience. People are constantly looking for ‘deals’ or the cheapest, fastest way to get themselves and their families fed, but they want something more than fast food.”

At the other end of the consumer spectrum, Lin continued, are the customers who are looking for an “experience,” or an event they can’t reproduce in their homes.

“Just witness the explosion of all the food-centric shows on TV,” he explained. “That is not to say though that in the second category, people are not conscious of value. And, I would also say that many if not most consumers have times and occasions where they are looking for category 1 and other times category 2.”

The “barbell” of consumer demands has led to the success of fast casual at one end and unique casual-dining concepts at the other, he said. Food Concepts International has two units of the fast-casual Abuelo's Taquerias, but it has focused on the casual-dining restaurants.

“The concepts that neither offer great value or anything terribly unique struggle,” he said, citing two examples from the bar and grill category.

“Two of the most successful concepts over the past six years have been Cheddar’s [Casual Café] and BJ’s [Restaurant & Brewhouse], who represent to me the two ends of the bar bell,” Lin said. “The ‘traditional’ concepts that are in the middle are trying to find a way to find their place, some more, some less successful.”

Lin said Food Concepts International has tried to position its casual-dining concept in the “something more” group to avoid become a commodity, which he said was what identified this first category.

“There is very little loyalty there, and big brands will always have an advantage of scale,” he said. “This is not to say that we are not conscious of value or budgets. Just look at the number of under-$10-dinner entrées that we have on our menu (over 20, excluding senior plates), but we’d rather compete on quality of food, service and atmosphere.”

Two big changes on the restaurant operations have marked the past 25 years, Lin added.

“On the positive side, technology has finally come to the restaurant business,” he said. “The ability to measure and dissect operating costs, often on a real-time basis, has led to much greater productivity and efficiency in how we run our restaurants.  Technology has also allowed us to more easily communicate with, and understand, our guests and for our guests to interact with us.  Social media is in essence ‘word of mouth on steroids.’”

The other big change, which Lin said has become a challenge, is the shrinking labor pool in both demographics and the appeal of the restaurant industry, especially for managers.

“The restaurant industry is a demanding one, and it just seems many younger people are looking for something easier to pursue,” Lin said, adding that quality labor will continue to be a challenge for the foreseeable future.

However, Lin said the Mexican/Latin food segment is becoming more mainstream and moving beyond Texas and the Southwest.

“In many markets, Mexican for dinner is not top of mind,” Lin said. “Clearly though, given the success of Mexican-themed concepts such as Chipotle for lunch, the natural progression is for Mexican food to be part of the normal ‘rotation,’ like Italian currently is for all day parts. We are well-positioned to take advantage of that trend.”

To tap into that appeal, Abuelo’s is currently promoting a silver anniversary three-course sampling menu through Aug. 4 that includes a guacamole appetizer, a flan and a choice from three classic entrees that range from $12.99 for the Laredo plate (beef enchilada, cheese enchilada and beef taco) to $20.99 for a 10-ounce ribeye and enchiladas.